As Q4 gets into full swing, we can take a moment to look back over our shoulders at where we’ve come from. The sustained upward trend of the markets is obvious from this view, and the recent downturn in the market appears as a bump against some otherwise solid gains. Even so, there are reasons for concern right now.

The COVID pandemic hasn’t gone away – and it doesn’t look like it will go away either. The September jobs numbers were weak, and unemployment only fell because too many people left the workforce. Which brings us to the main cause for concern, the Biden Administration wants to pump up social spending, even though we’ve seen evidence that increased government money has kept people out of the workforce and exacerbated a labor shortage.

But the US economy is nothing if not resilient – it has proven that over the last couple of centuries. Its underlying strengths, including an industrious people with access to continent-wide resources, are enough to bulldoze all sorts of troubles.

At the bottom line, says Adams, “The economy should keep climbing at an above-trend economic pace through at least 2022.” Long-term, in his view, it’s a bullish environment for stock investors.

“Temporary periods of fatigue are normal and given the supportive long-term fundamentals, equities should offer some attractive buying opportunities. U.S. equities remain our preferred territory, as the strong economic recovery and magnitude of earnings growth make it the leader of the pack,” Adams summed up.

The stock analysts at Raymond James would seem to agree. They’ve picked out three stocks, which they see gaining 50% or more in the coming months. Running the tickers through Investing Insights, we learned that the stocks they’ve tagged as winners have earned a ‘perfect 10’ Smart Score.

We’ll start with Tarsus Pharma (NASDAQ:), a biomedical research company that describes itself as involved in late clinical stage research in novel therapeutics for conditions with currently limited options for treatment. The company has a varied pipeline, in which the two main thrusts are the treatment of Demodex blepharitis, a disease of inflammation of the eyelids, caused by a parasitic mite, and the treatment of Lyme disease, a dangerous viral disease spread by ticks. Both have substantial patient bases in the US, with unmet medical needs.

To meet those needs, Tarsus has two major clinical trial programs ongoing. TP-03 is a novel therapeutic drug under investigation for the treatment of Demodex blepharitis. As of the end of Q2 this year, the company had reported positive from the Saturn-1 pivotal trial, and had initiated the Saturn-2 pivotal trial, a second Phase 3 study of the safety and efficacy of TP-03. Topline data from Saturn-2 is expected in 1Q22.

On the Lyme disease front, Tarsus is investigating TP-05. This drug is currently under evaluation in the Callisto Phase 1 trial. The trial is designed to determine the safety, tolerability, and pharmacological action of TP-05. The drug is intended to act against the tick that spreads Lyme disease. In another application, Tarsus is initiating a study of TP-05 as an agent against the spread of malaria, by acting against the mosquitos that spread the malaria parasite.

Covering TARS for Raymond James, analyst Dane Leone rates the stock a Strong Buy along with a $65 price target that suggests a robust 169% upside potential. Leone’s thesis remains centered on TP-03 in Demodex blepharitis, and he sees disconnect between the company’s market capitalization and TP-03’s market opportunity.

“The primary investor controversy surrounding the market potential of TP-03 has been 1) expected utilization, and 2) medical insurance coverage. We agree that reimbursement and pricing via medical insurance will continue to be a debate until clearer feedback can be garnered from both pivotal studies, but based upon our survey results, we do think that there could be good adoption within the ophthalmology community. Overall, we now forecast peak sales of TP-03 of ~$453m during 2030E…”

Overall, Tarsus gets another Strong Buy from the analyst consensus view, based on a unanimous 4 recent analyst reviews. The shares are priced at $24.20 and their average target of $59.75 implies ~147% upside from that level. (See TARS stock analysis) 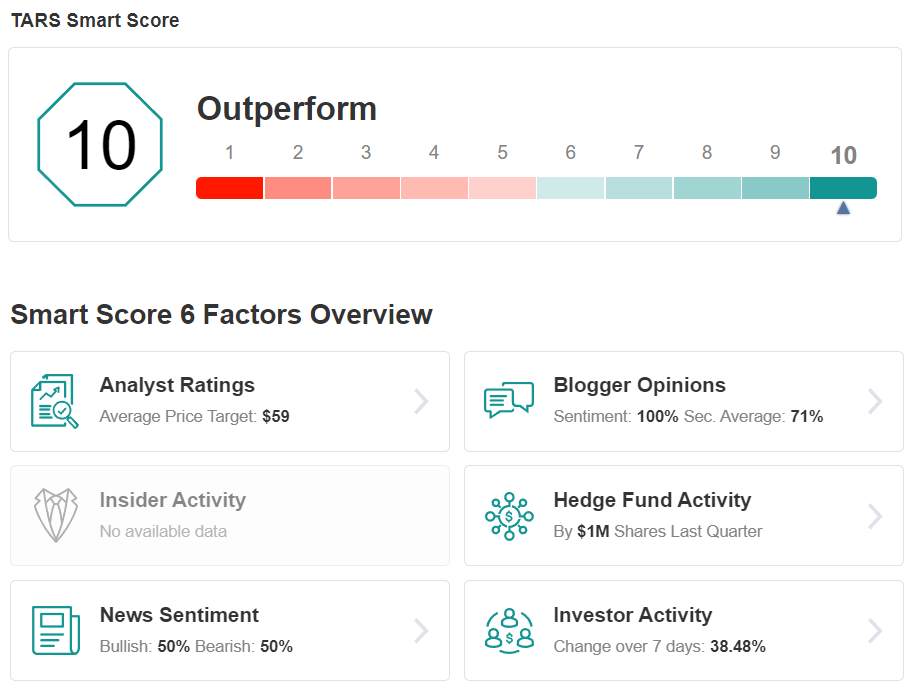 For the next stock on Raymond’s list, we’ll look at Houston-based Hewlett Packard Enterprise (NYSE:). This spin-off from Hewlett-Packard got started on its own in 2015 and now holds a spot as a multinational business information tech giant. With a market cap of $18 billion, HPE boasts deep pockets to support its server, storage, networking, and consulting operations. Products include cloud services and networking, as well as server and storage hardware.

Business IT is a major economic sector, and HPE’s recent fiscal 3Q21 report shows that. The report, for the quarter ending July 31, saw the company report demand up 11% year-over-year, while revenue came in at $6.9 billion. While revenue growth was modest, it was considered in-line with normal seasonal results. Earnings, at 29 cents per share, showed stronger growth; 45% sequentially and up from a 1-cent loss in the year-ago quarter. HPE’s cash flow was another bright point in the quarterly release. The company reported cash from operations at $2.9 billion, up from $1.4 billion in 3Q20. Free cash flow rose yoy from $1.1 billion to $1.5 billion.

Raymond James 5-star analyst Simon Leopold sees cash flow as a key point here, writing, “We value the stock based on cash flow, so the trends are encouraging… Timing issues can affect working capital, and HPE generated a lot of cash extending its accounts payable this quarter; our model shows overall improvement. We envision modest headwinds contributing to less than seasonal 4Q FCF, but the year can exceed $1.6B. We expect further improvement in FY22 that does not depend on generating cash from working capital.”

Leopold expects HPE to continue growing, and he rates the stock as Outperform (i.e. Buy). His $22 price target implies it has room for 51% share appreciation in the coming year.

Judging by the consensus breakdown, other analysts also like what they’re seeing. 6 Buy ratings and only 2 Holds add up to a Strong Buy consensus rating. The shares are priced at $14.72 and their $18.44 average target suggest upside of ~25% in the 12 months ahead. (See HPE stock analysis) 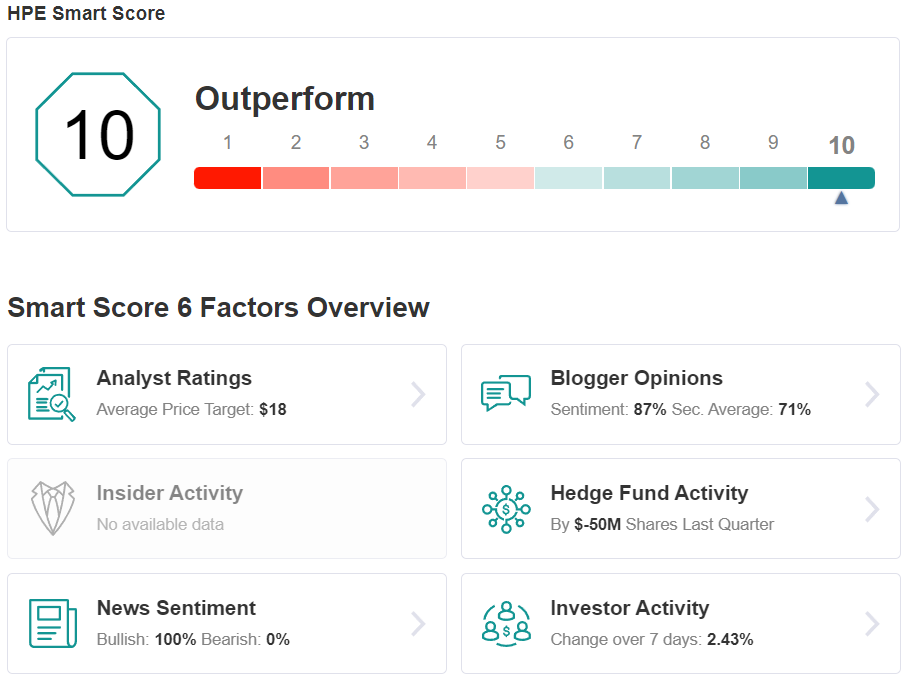 For the last stock, we’ll change gears and shift over to the online payment sector. This is a crowded segment of the digital finance world, and one that has potential for serious gains in the post-COVID world. i3 Verticals Inc (NASDAQ:) bills itself as delivering solutions – solutions in payments and software for small and medium businesses and non-profits. The company boasts customers in education, healthcare, retail, government, and property management, among others, and offers products in point-of-sale, e-commerce, and mobile payment transactions.

During the past several months, I3 has been actively pursuing an acquisition strategy to expand the company’s footprint. Back in April, the company reported two such moves, in the healthcare and public sector verticals. The transactions cost a combined $40 million. More recently, on October 4, I3 reported another healthcare vertical acquisition, this one worth $60 million.

The acquisition moves coming this year have coincided with rising revenues. The company has reported four consecutive quarter-over-quarter revenue gains since business bottomed out in Q3 of fiscal 2020. The most recent quarterly revenue, for fiscal 3Q21, came in at $61.9 million, up 96% year-over-year. For the first half of 2021, I3 reported processing over $17 billion in total payment volume.

Raymond James analyst John Davis takes an optimistic view of I3’s prospects following the recent healthcare vertical acquisition, writing: “Management continues to execute on its M&A strategy as the company closed yet another deal that not only makes strategic sense but is also financially attractive… Strategically, we believe the acquisition represents the long awaited healthcare platform deal with significant cross-sell opportunity… Although the stock has certainly underperformed YTD… we believe it has created a tremendous buying opportunity…”

To this end, Davis gives IIIV shares a Strong Buy rating, with a $40 price target that implies an upside of 68% in the coming year.

I3 Verticals also has a Strong Buy from the analyst consensus, based on 5 positive reviews against a single Hold. The stock’s $39.17 average price target suggests it has room to grow 65% from the $23.72 share price in the next year. (See IIIV stock analysis) 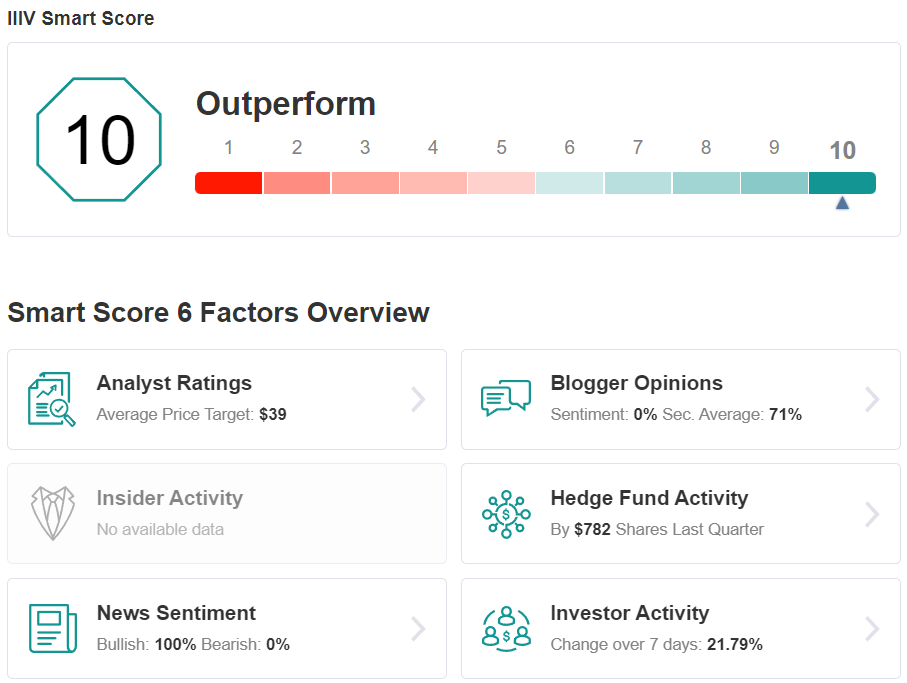 US sketches out tough regime for e-cigarettes with first authorisation The truth about the Anglosphere

Another Rally Lifts Stocks More Than 1.5% for the Week