Lately, Tesla (NASDAQ:) shares seem to have lost their magic. The stock no longer reacts wildly to every positive development, disappointing investors who made fortunes while staying faithful to the world’s largest electric car-maker.

The latest example of this dampening optimism came when Tesla announced its on July 26. The company’s shares fell more than 4% after the earnings report, which handedly beat analysts’ consensus estimates. 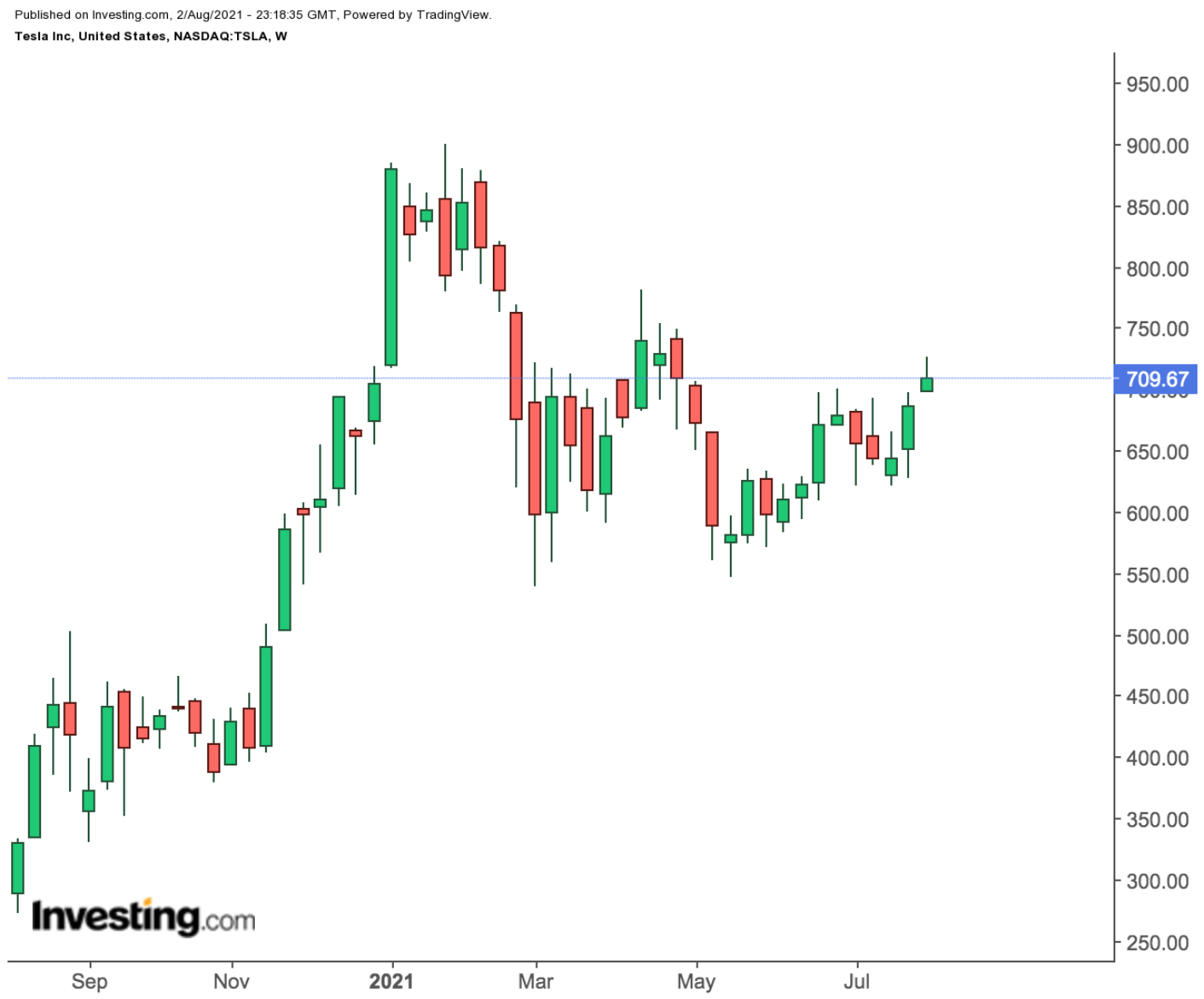 During the quarter, in which the California-based car-maker produced a record 201,250 vehicles, its profit more than tripled to $1.45 a share on an adjusted basis, beating the $0.97 average analysts had estimated. It was also the company’s eighth straight profitable quarter.

Tesla’s net income in the second quarter was roughly equal to the prior four quarters combined. The company reported revenue of roughly $12 billion for the period that ended June 30, nearly double the amount in the corresponding period a year earlier.

Despite this strong earnings momentum, the stock didn’t jump the way it once did on every shred of positive news. TSLA is up less than 6% during the past five days as of yesterday’s close. From its record high in January, Tesla shares are down almost 23%.

So, what’s prompting investors to shun this market tech darling, even when its financials have shown a great turnaround?

As we see it, there are both short- and long-term factors at play, causing Tesla enthusiasts to move to the sidelines. Here are three key catalysts that make this EV stalwart a risky bet right now, supporting our view that Tesla is not a buy in this environment:

The global chip shortages that have hurt production for many car-makers is beginning to pinch Tesla as well. During its earnings call, Tesla told investors that the company’s future pace of growth won’t be able to escape the ongoing supply-chain challenges.

The company, for example, is struggling to introduce new models and secure parts for all its vehicles. Tesla again delayed its semi-trailer truck—already two years late—with first deliveries now slated for 2022. The company attributed the delay to supply-chain issues and limited battery-cell supply, as well as trying to focus on getting new factories online.

The company’s plans for its first pickup truck, once expected to go to customers as early as this year, are also being affected by parts issues, said Chief Executive Elon Musk on an earnings call, without giving a revised first delivery date.

How long chip-supply issues will persist is anybody’s guess right now. Chip-makers are trying to eke out more supply through changes to manufacturing processes and by opening up spare capacity to rivals, auditing customer orders to prevent hoarding and swapping over production lines, according to a recent report by the Wall Street Journal. The bad news: there are no quick fixes, as building new production capacity usually takes years.

Another threat challenging Tesla’s dominance in the EV market is coming from new sources of competition. Overall, five of the biggest automakers— (OTC:), Ford (NYSE:), (NYSE:), Stellantis (NYSE:) and Volkswagen (OTC:)—have each laid out plans to spend an average $6.5 billion annually on electrification efforts over the next five to 10 years, according to Bloomberg.

In April, VW launched its new Audi Q4 e-tron model to compete with Tesla in the fast-growing market of compact crossover SUVs. The Audi’s EV model is among a dozen vehicles the German auto-maker has planned, including VW’s ID.4 and an electric version of the Porsche Macan. VW is aiming to sell roughly 600,000 purely battery-powered cars this year.

While traditional auto-makers, like Volkswagen and GM accelerate their EV efforts, smaller Chinese upstarts like Nio (NYSE:) and Xpeng (NYSE:) are also vying for tech-savvy customers.

According to media reports, GM’s EV plans will accelerate starting later this year as a Hummer pickup truck and Cadillac Lyriq sport utility vehicle begin rolling off the Detroit carmaker’s production lines. An electric Chevy Silverado pickup is also on the way.

In China, GM’s lower-priced Hongguang Mini EV, which it’s producing with two state-owned companies, has been a hit. More than a quarter of a million of the models have been sold since the vehicle launched last July, outperforming international rivals like Tesla’s Model 3 and local competitors, including Great Wall’s (OTC:) Ora Black Cat.

Tesla’s valuation has also been a major source of friction among Wall Street’s top analysts. Those who see Tesla as a highly overpriced stock argue that the company has no room to make an error when its stock is priced for perfection.

JPMorgan, which has an underweight rating on Tesla with a price target of $160, said in a recent note:

“Tesla’s high valuation leaves little room for less-than-perfect execution, as evidenced by a relatively tepid reaction in the aftermarket Monday to what was a fairly sizable EBITA beat, and we did see some less than perfect takeaways, including the official delay of the Tesla Semi into 2022 (albeit likely already almost entirely baked in); the seeming delay of the Cybertruck from late 2021 into 2022 (likely mostly baked in).”

Even after its recent selloff, Tesla has a $680-billion market capitalization, making it worth more than the combined value of GM, Ford, Toyota Motor (NYSE:) and Volkswagen.

Bernstein Research, which has a sell rating on Tesla with a price target of $175, said in its note:

“We continue to struggle to justify TSLA’s valuation, which is higher than all other major automakers combined and appears to imply huge volume and industry leading profitability going forward, which is historically unprecedented.”

These bearish views, however, shouldn’t hide the fact that many analysts believe Tesla is more than a car company and its stock has more upside.

Morgan Stanley’s Adam Jonas says Tesla shouldn’t be valued as a legacy car-maker. As cars become more connected to the internet, that opens up a lot of other addressable markets and Tesla is well-positioned to take advantage of those new opportunities.

Said Jonas in a Bloomberg report:

“In the process, it takes you away from comparing Tesla to car companies and should rather be compared to software-as-a-service companies.”

This divergence is evident from Investing.com poll of analysts regarding Tesla’s share price. Of 35 analysts, 15 have a buy rating on the stock, while 12 have neutral ratings and eight have a sell recommendation, with a 12-month consensus price target of $730.59. 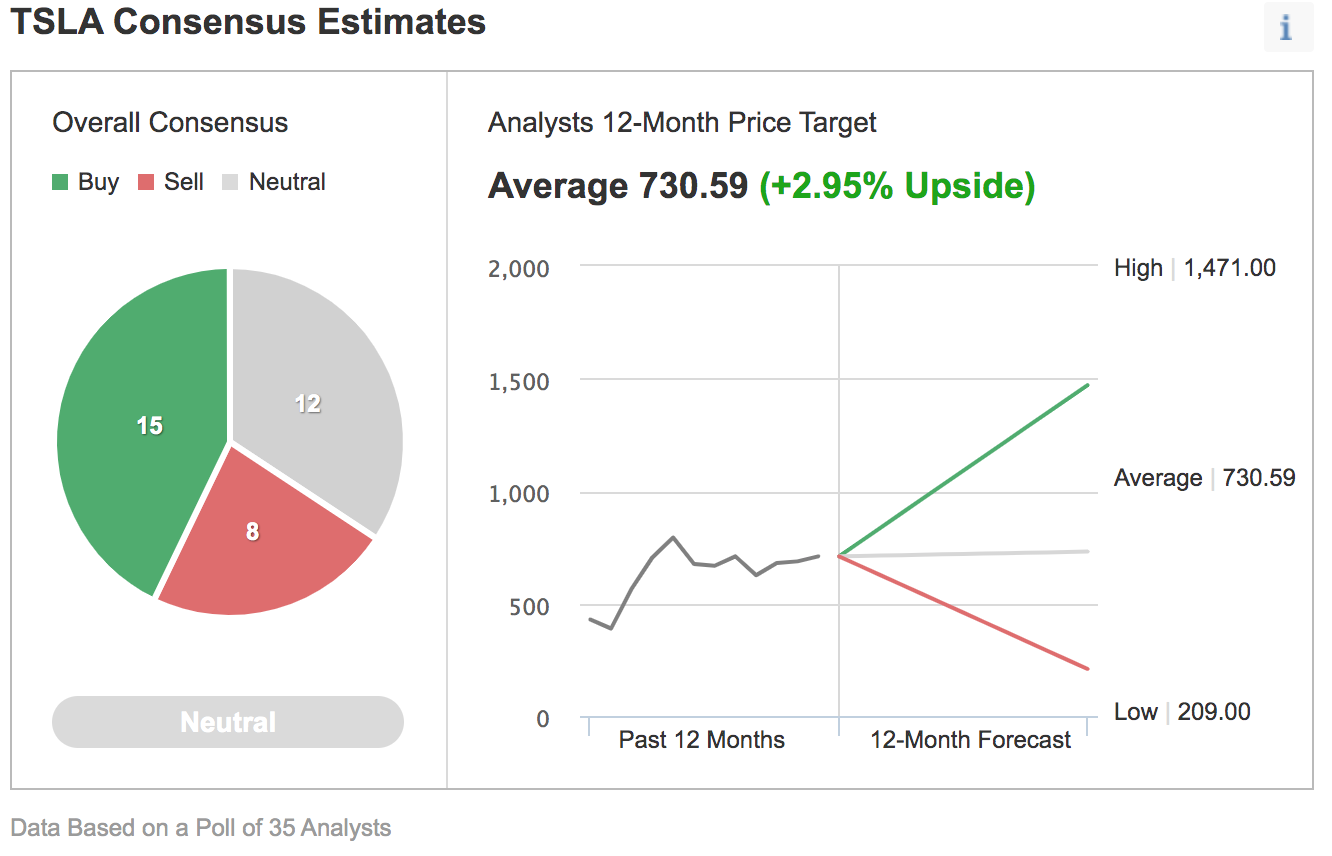 Tesla has remained the only credible player in the high-quality EV market in recent years, but that equation is changing quickly after the entry of new players and the massive spending plans being put forward by the legacy car-makers. These dynamics don’t justify the company’s current valuation, which assumes that Tesla will become the biggest seller of cars in the U.S., while competitors won’t be able to succeed.