Investors in the instalment lender Affirm Holdings (NASDAQ:) have seen their shares gain more than 71% since January, when the company made its public debut. AFRM stock started trading on Jan. 13 at $90.90 per share. By mid-February, it jumped to over $146, after which the bears got the upper hand. 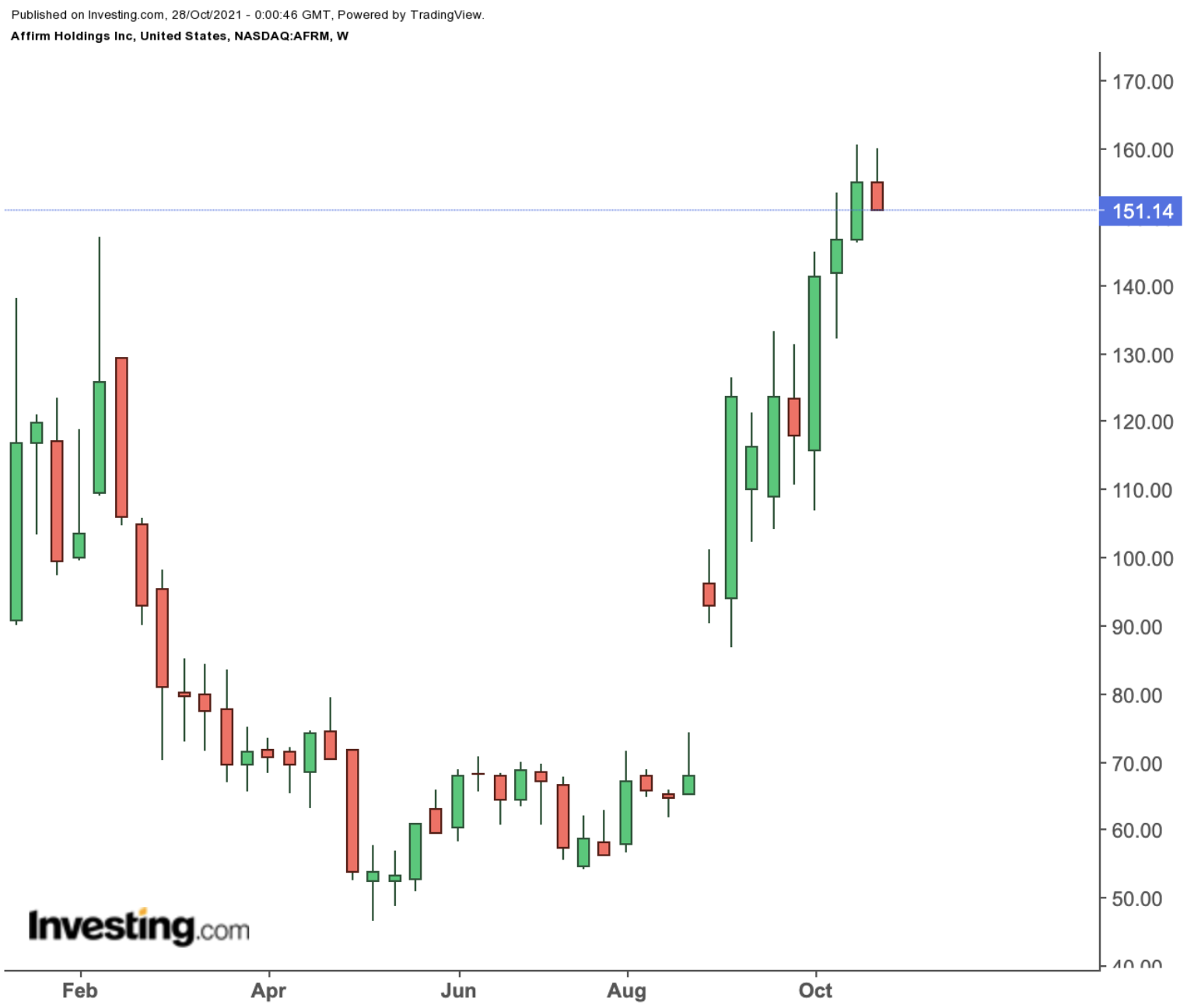 Affirm provides “buy now and pay later” (BNPL) purchase financing. In other words, consumers can split payments for purchases into installments. The recent run-up in the AFRM share price was in part fueled by news of partnerships with retail heavyweights, including Amazon (NASDAQ:), American Airlines (NASDAQ:), Shopify (NYSE:) and Target (NYSE:).

Readers might remember that in August, the financial technology giant Square (NYSE:) announced it would be buying Australian BNPL firm Afterpay for $29 billion.

In addition to the increasing number of solid partnerships, earlier in the year, Affirm acquired Returnly, which focuses on online returns. This illustrates how the online payments group is growing organically. It is also expanding its offerings through acquisitions to become an important name in the fintech space. In fact, many investors wonder whether Affirm might also be acquired in the quarters ahead.

On Sept. 9, management issued and FY21 metrics. Revenue came in at $261.8 million, up 71% year-over-year. Loss per share was 48 cents. The company also issued upbeat earnings guidance for FY22.

“During the fourth quarter, we increased the number of merchants on our platform by more than fivefold, more than doubled gross merchandise volume and grew active consumers by 97% year over year.”

Prior to the release of its quarterly results, AFRM stock was hovering at $90, or around the level where it first started trading in January. Since then, shares have gained about 72%.

What To Expect From Affirm Holdings Stock

Among 13 analysts polled via Investing.com, AFRM stock has an ‘outperform’ rating. Nevertheless, the shares have a 12-month price target of $121.92, implying a decrease of about 22% from current levels. The 12-month price range stands between $65 and $175. 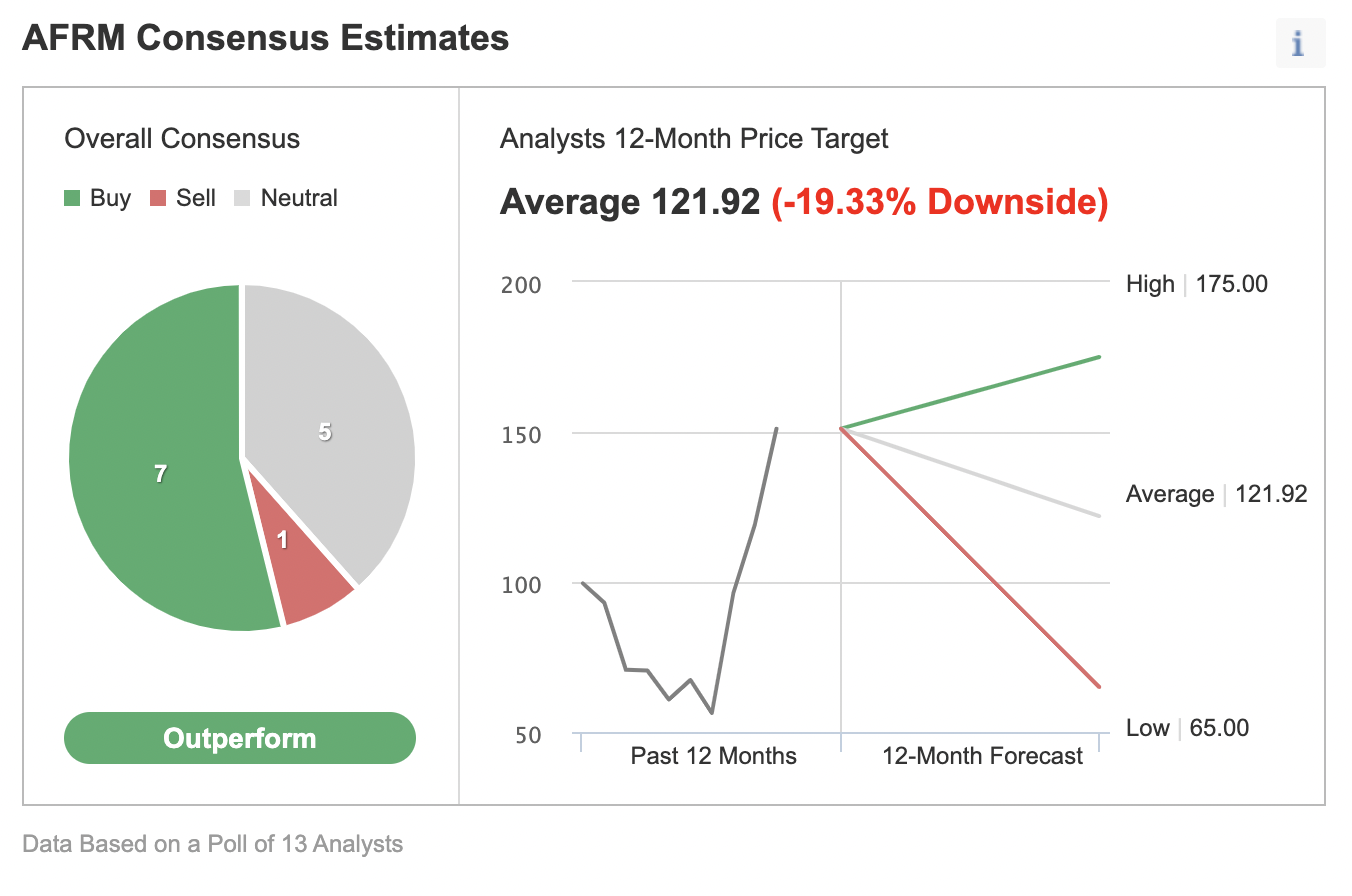 In other words, Wall Street believes the current price incorporates much of the good news likely to come from Affirm, and short-term profit-taking is probable.

On the other hand, P/S and P/B ratios for Upstart Holdings (NASDAQ:) are 56.43x and 33.49x. Put another way, investors have not been shy to pay for premium valuation levels for fintech names in the limelight.

Readers who watch technical charts might be interested to know that a number of AFRM’s short- and intermediate-term oscillators are overbought. Although they could stay extended for a long time, there could also be short-term volatility and profit-taking. As other tech names report earnings in the coming days, AFRM shares could become choppy, especially if its peers were to come under pressure.

Our expectation is for Affirm stock to slide toward the $140 level, where it is likely to find relatively strong support. The shares then would likely trade sideways while it establishes a new base.

Investors who are not concerned with daily moves in price and who believe in the long-term potential of the company could consider investing in AFRM stock now.

Yesterday AFRM closed at $151.14. Buy-and-hold investors should expect to keep this long position for several months while the stock first makes an attempt at the record high of $165.94, returning about 7% from the current level.

Readers who plan to invest soon but are concerned about large declines might also consider placing a stop-loss at about 3-5% below their entry point.

Traders who do not want to commit capital to Affirm Holdings stock, but would still like to have substantial exposure to the shares, could consider researching a fund that holds the company as a holding.

Examples of such ETFs include:

Readers who also believe there could be some profit-taking in Affirm Holdings shares in the short run might consider initiating a bear put spread strategy. As it involves options, this set up will not be appropriate for all investors.

It might also be possible for long-term AFRM investors to use this strategy in conjunction with their long stock position. The set-up would offer some short-term protection against a decline in price in the coming weeks.

Such a bear put spread would be established for a net debit (or net cost). It will profit if AFRM shares decline in price. Let’s now look at an example with numbers from Oct. 27. When the market opens on Oct. 28, these prices will be different. However, the method of risk/return calculation is the same.

For instance, the trader might buy an out-of-the-money (OTM) put option, like the AFRM 21 January 2022 150-strike put option. This option is currently offered at $18.00. Thus, it would cost the trader $1,800 to own this put option, which expires in about three months.

At the same time, the trader would sell another put option with a lower strike, like the AFRM 21 January 2022 140-strike put option. This option is currently offered at $13.10. Thus, the trader would receive $1,310 to sell this put option, which also expires in about three months.

This maximum loss of $490 could easily be realized if the position is held to expiry and both AFRM puts expire worthless. Both puts will expire worthless if the AFRM share price at expiration is above the strike price of the long put (higher strike), which is $150 at this point.

This trade would break even at $145.10 on the day of the expiry (excluding brokerage commissions).