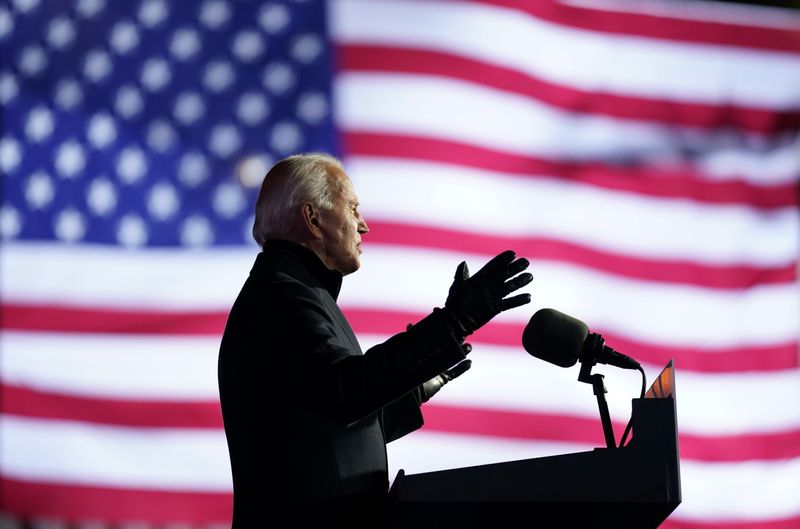 Here are six key industries that could see change under a Joe Biden Administration. For a story on how these sectors might change under if President Donald Trump wins the election and get a second term in office, click.

A Biden victory would make it likely that automakers will once again face tougher carbon emissions targets. But the auto industry could also get more help with a transition to electric vehicles if Biden can deliver on promises to expand electric vehicle tax credits and fund charging infrastructure.

Biden has pledged if elected to reinstate the legal basis for California’s zero-emission vehicle rules and begin the process of reversing the Trump administration’s decision to ease fuel efficiency and carbon emission requirements through 2025.

Automakers could also face sharply higher penalties for failing to meet fuel-efficiency requirements. The Trump administration rolled back those penalties, which the industry said saved at least $1 billion in annual compliance costs. But a federal appeals court in August reversed the administration action.

However, Biden has promised new tax incentives including rebates to buy EVs and a dramatic expansion of charging stations for electric vehicles – policy measures automakers have long advocated.

Biden’s picks to run the Environmental Protection Agency and the National Highway Traffic Safety Administration will be pivotal for the auto industry. A strong advocate of climate action at EPA, and a tough enforcer on vehicle safety at the NHTSA would put more pressure on automakers after four years of relatively hands-off regulation. Automakers could try to use the regulatory reboot to push their case for modernization of both emissions and safety regulations to speed deployment of new technology such as autonomous vehicles.

A Biden win isn’t likely to lift the regulatory cloud over Big Tech, with some Democrats eager to go even further than the Trump Administration in scrutinizing practices at Alphabet Inc’s (O:) Google, Apple Inc (O:), Amazon.com Inc (O:) and Facebook Inc (O:). The Justice Department antitrust lawsuit against Google, filed last month, is expected to continue and could even be broadened.

A Biden Administration and a Democratic Congress could also mean new privacy regulations and a revision of a key law that protects internet companies from liability for the content posted on their services. But tech companies have many friends among Biden advisors, including vice president-elect Kamala Harris, and will fight hard to water down any new laws.

The biggest changes for the tech sector could come on China and trade policy. The fate of China-owned TikTok, if not sealed before Inauguration Day, could be an early test of Biden’s approach. Tech companies hope a Biden administration will take a less confrontational approach than Trump, who has sanctioned numerous Chinese tech firms and pushed to sever many of the ties that have long bound U.S. and Chinese tech industries.

Tech companies do stand to benefit from a rollback of Trump-era restrictions on worker immigration under a Biden Administration.

But a Biden win will almost certainly mean a higher tax bill: tech companies were among the biggest beneficiaries of Trump’s reduction in corporate income tax rates, which Biden is expected to reverse at least in part. Venture capitalists and other tech investors may also take a hit if the controversial “carried interest” provision of the tax code, regarded by critics as a giveaway to the rich, is eliminated.

The pharmaceutical industry has spent millions on lobbying and campaign contributions to head off a push by Congress to slash U.S. drug prices, a possibility that would become more likely if Biden is elected President.

Biden has vowed to reduce drug costs and to allow Medicare, a U.S. government health insurance program, to negotiate drug prices. He has support from Congressional Democrats to pass such legislation, which the Congressional Budget Office has said could cost the industry more than $300 billion by 2029.

One silver lining for the industry is that Biden’s promise to expand health insurance coverage to more Americans through the creation of a government run health insurance option could lead to more people being able to afford drugs, boosting demand for drugmakers’ products.

A Biden victory would likely mean an increase in domestic production of lithium, and other metals used to make electric vehicles, solar panels and other products crucial to his climate plan.

Where such mines will be developed, though, and how large they will be is likely to be a major point of conflict within a new Biden administration, with his climate plan seemingly at odds with his push to boost U.S. manufacturing.

Biden said little about mining during the presidential campaign, either for or against. But his campaign has been privately telling U.S. miners it would support increased domestic mining, sources have told Reuters.

At the same time, Biden has launched lofty goals of making the U.S. a carbon-neutral nation by 2035, a plan that can only be achieved with wind turbines, solar panels and other materials made from mined rock.

News organizations may see a dip in their audiences if voters elect Democratic presidential nominee Joe Biden, a career politician whose time in office suggests he is less likely to break presidential norms than Donald Trump.

Biden, who was first elected to the U.S. senate in 1972, has a track record of not generating headlines as frequently as Trump. He is less incendiary than Trump and to date has not used social media to frequently attack rivals or retweet unproven theories, as Trump has.

Yet even if a Biden presidency introduces a return to politics-as-usual, without the uncertainty that characterized much of the past four years, Trump could still generate headlines, via potential post-White House legal battles or remarks on his own platform.

According to reports in the Wall Street Journal, Vanity Fair and Business Insider, investors aligned with the Trump family are exploring opportunities to fund a conservative media venture or Trump-themed media outlet.

If Biden wins, Fox Corp (O:)-owned Fox News could still attract a large audience, with the Democratic president’s critics rallying the network’s largely conservative base. More liberal viewers may have less reason to watch AT&T Inc (N:)-owned CNN and Comcast Corp’s (O:) MSNBC, where anchors such as Don Lemon and Rachel Maddow have covered Trump’s misdeeds with outrage since he took office.

To be sure, other national crises will still drive the news cycle no matter who gets elected. With a COVID-19 vaccine not expected to be generally available in the United States until mid-2021, Americans are likely to experience continued travel and other restrictions – homebound and seeking clarity from the media about what happens next.

U.S. President Trump has imposed $370 billion in tariffs on goods imported from China, part of his “America First” agenda. Those tariffs on products ranging from handbags to small electronics are estimated to have cost U.S. importers some $61.6 billion through early September, according to U.S. Customs and Border Protection, and have been blamed for eroding U.S. manufacturing competitiveness. Retailers argue the tariffs will result in higher prices for consumers and lost jobs.

“If Biden wins, we expect that he will look to reevaluate the current strategy on trade,” said Jonathan Gold, National Retail Federation Vice President for Supply Chain and Customs Policy.

In general, retailers need a trade policy that provides certainty and stability as they plan supply chains to meet customer needs in a time when COVID-19 is creating more uncertainty, Gold said.