A Make Or Break Moment For Nikola Investors


Nikola Corp (NASDAQ:) shares surged over the summer when it announced a deal with General Motors Company (NYSE:) to build its Badger line of trucks. The news took the market by storm, a deal with GM to build the Badger would put both company’s on track to compete with the Ford Motor Company (NYSE:) F-Series, but may just be a boondoggle.

A scandalous report from short-seller Hindenburg Research alleged multiple wrongdoings leading to his ousting as CEO and Chairman. Now, the company says its deal with GM is still in the works but there are a number of reasons to believe the Badger won’t be part of the deal.

The analysts are mixed on the stock but tend to have one thing in common. While they believe the focus on Class-8 vehicles and long-haul trucking is a good one the Badger is a costly project that will hold the company back. In his note to investors, Wedbush Securities analyst Dan Ives (Underperform, $15 price target) said “Overall we still believe the company’s EV and hydrogen fuel cell ambitions are attainable in the semi-truck market, although we have serious concerns that the execution and timing of these ambitious goals stay on track over the coming years.”

His comments are echoed by bull Paul Coster of J.P. Morgan. He says (Overweight, $40 price target) “Nikola appears keen on proceeding with the GM deal, but we sense that focus is mainly on the Class 8 initiative. The firm might still proceed with the Badger pickup initiative, but the CFO stated that it could require a capital raise in 2021 … The best scenario seems to be successful negotiation of a GM deal, but of reduced scope to exclude the Badger initiative, we believe.”

Nikola is still a long way off from generating any revenue but it is on track with its plans at least. The good news is the company has not experienced any unforeseen costs as yet and reported a GAAP loss better than the analysts were predicting. The -$0.31 reported beat by $0.02. Looking forward, the company is well-capitalized in the near-term with more than $908 million in cash and equivalents.

“We delivered on our commitment to assemble the first Nikola Tre BEV prototypes and are continuing to work with customers on the prospective and previously announced BEV truck orders.”

The first of the BEV prototypes are already completed and undergoing testing at IVECO’s Ulm, Germany facility. The remaining prototypes should be completed by the end of the year leading to the second-round build early in calendar 2021. During the quarter the company was also able to break ground on its Arizona manufacturing facility as well as complete the refurbishing of the joint-venture facility with IVECO in Ulm. The Phase 1 assembly shop should be completed at the AZ facility by EOY 2021. Trial production could begin as soon as late in the 2nd quarter of 2021.

Nikola Rises After Earnings But Beware The Shorts

Shares of Nikola rose more than 11.0% in the wake of the release. While the Badger angle is less than what I’d like to hear the company is still well on track to complete its plans in the class-8 sphere. In terms of price action, the post-earnings gains are bullish and may be confirming a bottom with one caveat. The company is still a long way from producing any revenue and there is the 30-day moving average to consider.

If price action can get above the 30-day moving average we may see it begin to edge higher again. If not this stock could be in for another big fall and there is plenty of short-interest to fuel it. Sitting near 25% the shorts are either going to drive this thing back down to $10 or help drive it back up to $30 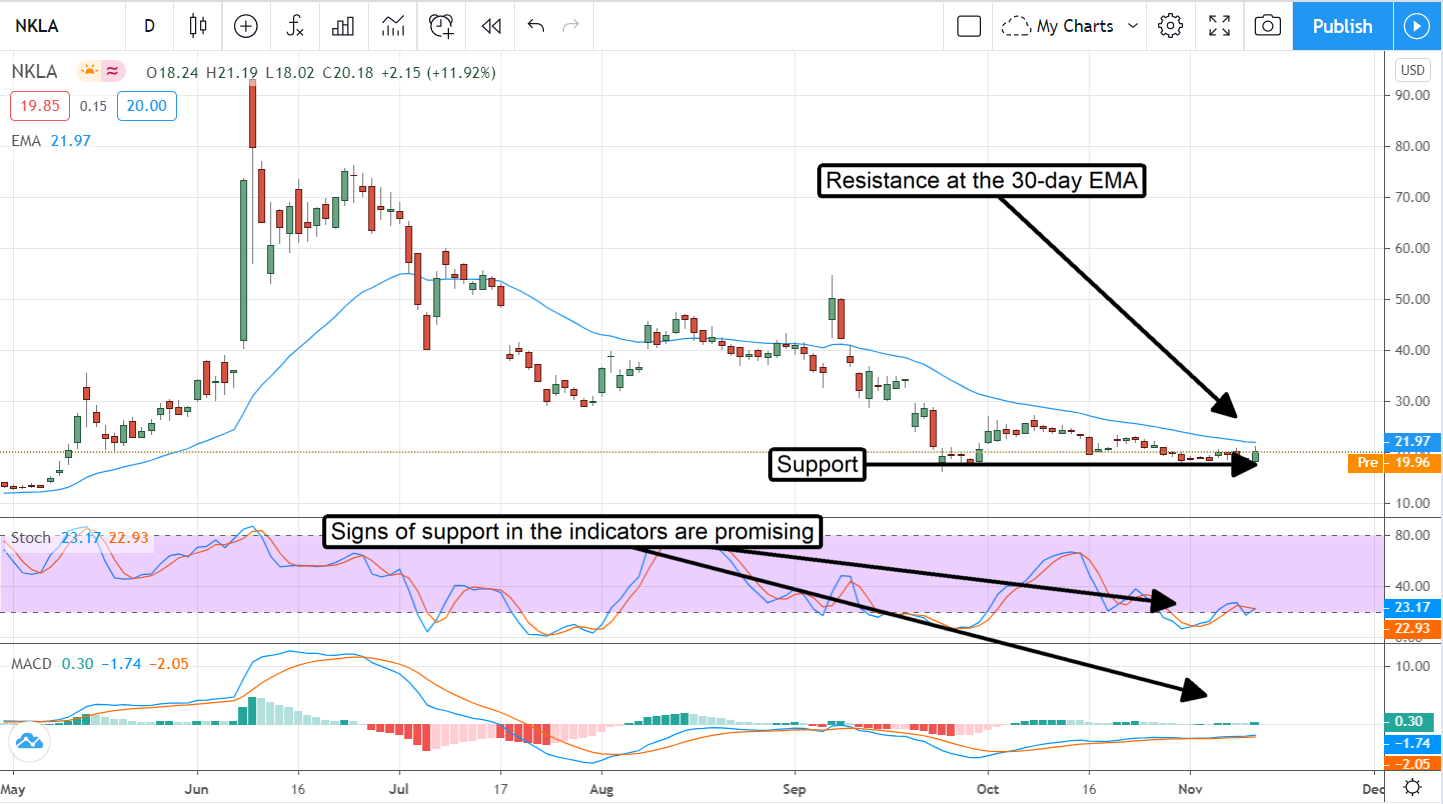