A New Burst Of Reflation Pricing In The Treasury Market

Was it a reaction to news over the weekend that Joe Biden won the Electoral College vote? Meanwhile, Pfizer (NYSE:)’s announcement on Monday that an experimental COVID-19 vaccine is 90%-plus effective helped set reflationary hearts aflutter. It’s still too early to declare that a decades-long disinflationary trend has run out of road, but the possibility that regime shift has arrived, or is near, has traction… again.

Calling the end of the disinflationary run that’s endured for decades has been a hardy perennial, and a perennial loser. But maybe it’s different this time. At some point it will be. Timing, of course, is unknown. That leaves mere mortals with the usual bag of tricks: monitoring the data in search of convincing evidence that support predictions that reflation’s return is the real deal this time. We’re not there yet but here are some of the indicators on the short list to monitor.

Let’s start with the benchmark yield, which rose to 0.96% yesterday, the highest since March. Notably, this yield is now comfortably above its 200-day moving average — the first consistent run over that average in two years.

If the 10-year rate can hold above the 200-day average, that would boost the case for reflationary expectations. A higher bar is a sustained rise in the 50-day average above the 200-day average. These are technical signals, but if these shifts unfold and endure in the weeks ahead, that changes would offer stronger signs that market sentiment is shifting toward a reflationary bias. At the moment there’s only a whiff of that possibility. Let’s see if there’s any follow-through.

Another market-based indicator to watch: the Treasury market’s implied inflation forecast (based on the yield spread between nominal less inflation-indexed yields). There’s been a strong rebound in this measure, although to date that’s primarily been a process of recovering from the coronavirus crash that cut the legs out for this yield spread. The question is whether the market raises its inflation forecast further in the weeks ahead? Running above 2% would go a long way in convincing the crowd that there’s genuine upside momentum bubbling. 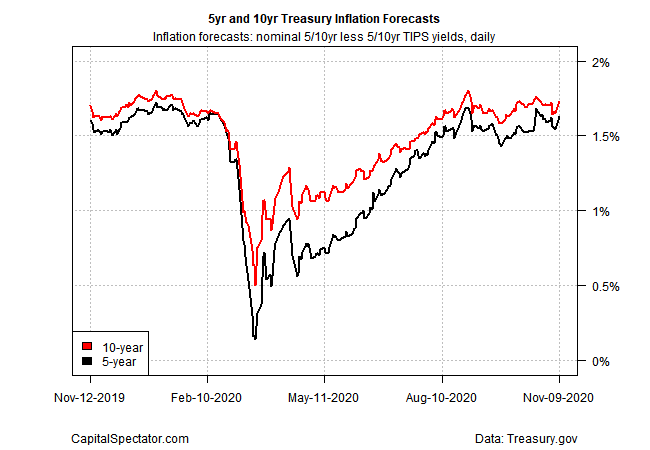 Another key metric to watch: the Treasury yield curve. The 10-year less 3-month spread has been steepening lately, which some analysts say is an early sign that a reflationary bias is returning. It’s a possibility that’s getting harder to dismiss as the spread rises. Currently the spread’s at 85 basis points, the highest since March. A psychologically notable event would be an increase over the 100-basis-point mark.

Another key indicator is wages, perhaps the most important driver of inflation in the US consumer-based economy. One measure of – average hourly earnings for private-sector employees – has been trending up in recent years and so watching how these numbers evolve in the months ahead will be telling. The challenge is that the coronavirus recession, and the government’s fiscal stimulus for the wave of newly , has unleashed a huge degree of volatility in this data set. But as the numbers return to something approximating normal conditions in the months ahead, this corner of inflation monitoring will provide a valuable measure of reflation’s bias (or the lack thereof). 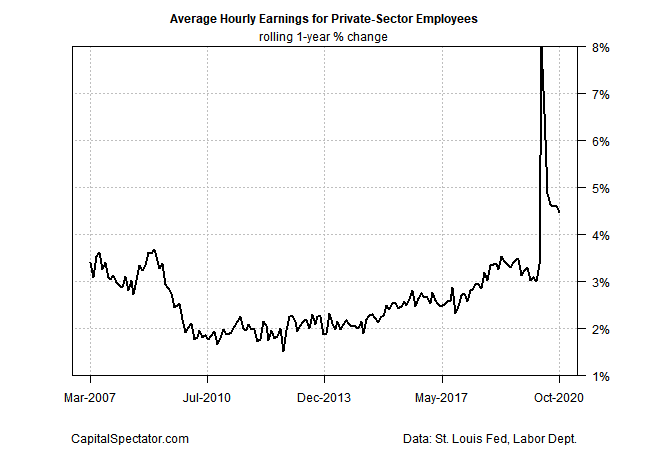 The hard data on inflation indexes deserve close attention too, starting with this Thursday’s update of for October (Nov. 12). The consensus point forecast (via Econoday.com) is expecting that the annual pace of core inflation will hold steady at 1.7%, moderately below the Federal Reserve’s 2% inflation target. By that standard, CPI will deliver more of the same: a bounce after the lows directly following the initial wave of the coronavirus blowback but modestly below what had prevailed before the pandemic. 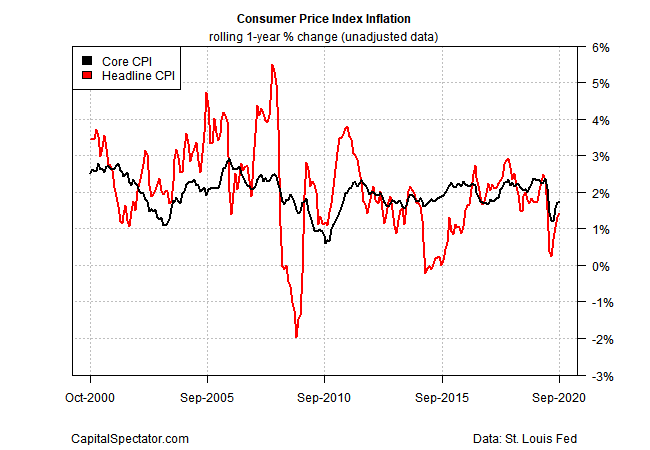 After decades of disinflation, the reflationistas have their work cut out for them to convince the wider world that a genuine change is in progress. Secular forces are still working against this line of analysis, such as an aging population, technology-driven disinflation/deflation and other factors. Deciding if the latest pushback on these trends is the real deal will take time. Meantime, it’s an intriguing talking point and it may have more room to run and resonate, but it’s still premature to declare that the tide has turned. The key question: Will 2021 tell us otherwise?