Welcome to a Black Friday like we’ve never seen before.

Retailers such as Walmart (NYSE:), Target (NYSE:) and Best Buy (NYSE:) that knocked sales out of the park this year are in the spotlight today, and many analysts expect them to do quite well despite all the state shutdowns. The National Retail Federation (NRF) pegs overall holiday sales gains of 3.6% to 5.2%—a wide swing by most assessments that underscores the level of uncertainty on consumer spending this year. The International Council of Shopping Centers has a tighter, lower forecast of a 1.9% gain in sales.

Friday’s session wraps up at 1 p.m. ET, three hours earlier than normal. Don’t be surprised if trading is thin and choppy, because many investors and traders probably took the day off. Check for media reports throughout the day on how Black Friday is going, but it won’t necessarily be like in the past, with reporters following customers around big-box stores. It might be a bit harder to get a feel for how things are going.

E-commerce sales could knock the ball out of the park, though. An Accenture (NYSE:) survey found 75% of consumers plan to head to their favorite easy chair or the kitchen counter to shop online for holiday gifts this year. That’s up from 65% who said so last year.

Wednesday’s session wasn’t much to write home about, though it’s worth noting that some of the “stay at home” stocks in the tech sector, including semiconductors, got a boost after playing second fiddle to financials, energy, and industrials earlier in the week. One big tech winner was Slack (NYSE:), whose shares jumped about 37% after The Wall Street Journal reported that the workplace messaging platform is in acquisition talks with Salesforce (NYSE:).

The couldn’t keep its head above 30,000 Wednesday after getting there for the first time on Tuesday, but that stands to reason. You often see consolidation after a big milestone is hit. Anyway, the $DJI isn’t the market. It’s only 30 stocks. While it’s come a long way since the pandemic lows, it hasn’t done as well as the or , for that matter.

Also, the Index of small caps has been outrunning almost everyone else the last month or two, though it took a breather Wednesday. Don’t discount the impact of a thriving housing sector on the RUT. When housing is strong, it can increase business for the regional banks that make up a good chunk of that index.

While the major indices gallop, the dollar continues to edge lower. The —which measures the greenback versus a basket of other currencies—slipped below 92 on Wednesday for the first time since early September. Wednesday’s dollar weakness came after weekly initial jobless claims ticked above Wall Street’s expectations for the second time in a row. A flagging dollar can sometimes be helpful for equity bulls and might signal growing enthusiasm about overseas economies returning to life next year, but also speaks to concerns about U.S. economic softness. Some analysts now expect U.S. growth to go negative in Q1.

Those lower Q1 estimates are despite the Atlanta Fed’s GDP Now meter predicting 11% seasonally-adjusted annual growth for Q4. That’s up from its previous estimate of 5.6%. We’re still a long way from getting Q1 estimates from the Fed, but investors can expect some longer-term growth outlooks, perhaps, at the Fed’s mid-December meeting.

That’s well in the future, so let’s look at what faces investors next week. Nothing stands out as much as next Friday’s monthly payrolls report, and more eyes are focused on it after these last two weeks of rising jobless claims that suggest the recovery has slowed. October saw 638,000 new jobs created, but the headline figure is down several months in a row, and some analysts are even wondering if eventually it could go negative.

Other key reports next week include Chicago PMI and monthly ISM manufacturing. The ISM could be interesting, considering how strong it was in October. Any sign of a pullback might raise concerns that lack of government stimulus and rising virus cases have started a negative blowback. Weakness there might get reflected in some of the same cyclical sectors that helped lead the recent rally. We’re talking Industrials, Materials, and Energy.

Besides the Fed meeting, December could feature vaccine approvals and the start of distribution if all goes well. Anyone looking for a catalyst might want to monitor that situation closely. The last three Mondays featured positive vaccine news lifting the market. While that may just be coincidence, keep an eye on stock futures Sunday night for possible clues about whether a fourth winning Monday in a row could be in the cards.

We’re still awaiting some virus data from other companies, and of course any action from the U.S. Food and Drug Administration (FDA). Regulators there plan to take about three weeks to review Pfizer’s (PFE (NYSE:)) vaccine before an outside panel of experts meets to review the application the second week of December. That meeting has been scheduled for Dec. 10, The New York Times reported this week.

Also keep an eye out next week for OPEC, which at its meeting is expected to keep current production cuts unchanged. Crude zoomed up to eight-month highs earlier this week above $45 a barrel, and that’s helped spark the energy sector. Still, there’s a sense that things may have come too far, too fast, considering relatively soft U.S. economic data recently. It’s unclear if demand is really here, or if investors are just getting excited about chances for improved demand, say, six months from now when things are hopefully more normal. 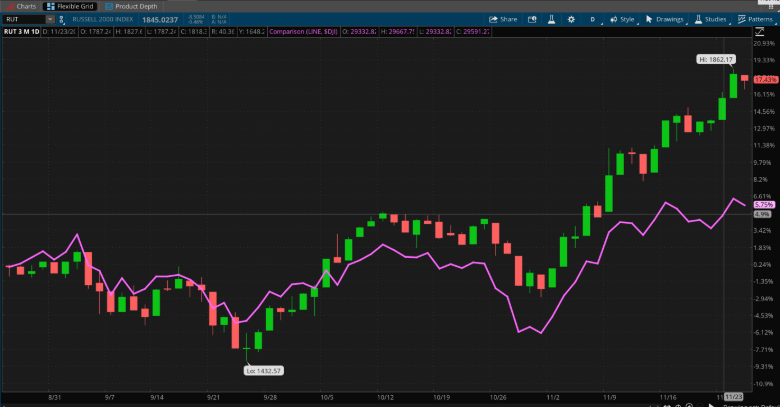 “Fed Put” Has New Competition: You already know the stock market can go down as well as up, despite the way things might seem lately. However, recent down moves have frequently run into a “buy the dip” mentality. That could be in part because the major indices enjoy a “vaccine put”—kind of like the “Fed put” they already had, some analysts argue. The “Fed put” is an expression that grew popular when the Fed kept rates near zero for years to allow the economy to recover from the Great Recession. Investors then (and in some cases today) felt reassured that if something bad happened, the Fed would have the market’s back. Now if something bad happens, there’s hope that a vaccine or two on the near horizon could keep a nice net under the market, as well. This, along with hopes for continued positive headlines on vaccines and a general sense that the economy can do better in 2021, could be driving some of the pre-holiday optimism.

Like No Holiday Season Ever: With today being Black Friday, normally the TV networks would show people lining up to be first into stores. Maybe some shoppers are heading to big boxes as they usually do, but it’s likely more are staying home and ordering. Others may be “drive-by” shopping and picking up their orders in their cars. With more of this untraditional shopping expected as the holidays continue, retailers face logistical challenges to get everything packed and delivered, one retail executive told CNBC Wednesday. Some of this could end up reflected in holiday-quarter bottom lines when Q4 earnings start filtering in two months from now.

No doubt expenses have risen for the sector due to COVID-19. We’ve already seen Amazon (NASDAQ:) announce the hiring of 100,000 seasonal employees to help with what’s expected to be unprecedented online holiday demand. Other companies have made major supply chain investments to deal with increasing e-commerce sales and deliveries. There are also expenses for protecting more workers from the virus, as Home Depot (NYSE:) outlined in its recent earnings call, and higher wages some companies, including HD, are paying employees. While shares of some retailers fell despite strong Q3 earnings as investors worried whether the sales pace was sustainable and concerned about costs, you could argue that in the long run, COVID-19 sped up a lot of changes that were already in process before the pandemic. This could ultimately benefit retailers who invested smartly.

Gate Check: There’ve been just four days since March when more than a million Americans passed through airports, according to the Transportation Security Administration (TSA). Three of them were in the last week, while four other recent days saw more than 900,000 but fewer than one million passengers travel by plane. Despite government calls on people to stay home, Thanksgiving travel has been going on—though the pace is less than half of last year’s. This could explain why some of the airline stocks got a lift earlier this week, along with strength for Boeing (NYSE:) shares, which are sometimes viewed as an overall barometer for the air travel sector. It might also explain the recent strength in crude, which rose to its highest levels since March on Tuesday. All that said, many airlines had been hoping that air travel would fall only about 50% from a year ago, and instead it’s down more than 60%. There’s still the Christmas travel season to consider, so we’ll see if things pick up further.