After Hitting 30,000, DJIA, Other Indices Hit Pause Ahead of Thanksgiving


The elevator ride takes a pause this morning, but it’s still been an impressive week. The now sits just below 30,000 in pre-market trading after topping it yesterday, and there’s a chance this milestone moment could draw some new cash into the market, according to one school of thought.

While 30,000 is just a number, as we noted here yesterday, it’s an attention grabber. All those headlines probably got noticed by people who may not have been invested or who just hadn’t cared enough before to put more money into the market. Now they may be wondering what they missed. The post-Thanksgiving period could be interesting in determining whether cash on the sidelines starts to roll in.

Having said that, the market has come a long way very quickly, so caution could be the word of the day. Long-term investors should consider how they got here and not get carried away by all this optimism. There’s possibly a reckoning up ahead when people realize there’s a long way to go before the country recovers from the pandemic, and that an effective vaccine may be one thing but getting it produced and in the arms of those who need it is extremely complicated.

The mood this morning seems a bit subdued ahead of the holiday, and profit-taking could creep in after the big rally and before people go home for their turkey tomorrow. If history is any guide, we shouldn’t expect much direction from today and Friday’s sessions, though things may get choppy due to low volume. Instead, it might be better to wait until everyone’s back Monday for more clues about where things might go next.

This morning did bring some earnings news, with Deere (NYSE:) having a nice quarter and shares rising in pre-market trading despite DE just missing analysts’ average revenue estimate. Critically, the company said demand for its heavy equipment is improving, which could be another sign of the world’s economy continuing to recover. DE became one of a number of firms recently to issue solid 2021 guidance, and that seems to be more in focus than the revenue miss.

There’s also some data ahead of the holiday. Weekly initial jobless claims came in a day early and totalled 778,000, above average Wall Street estimates for the second straight week. This figure has remained stubbornly high, reinforcing ideas that the economy still has a long way to go. Meanwhile, seasonally adjusted gross domestic product (GDP) growth of 33.1% in Q3 was the same as last time, so no big deal there. The market’s shown no reaction to these numbers ahead of the opening bell.

With so many headlines centered on 30,000 (see chart below), you might have missed some other key developments.

First of all, the clawed over 3600 again, a level it’s had trouble holding in previous rallies. We’ll see if it has more luck this time. Second, a closely watched economic barometer, , hit nearly three-year highs (see more below). Meanwhile, gold keeps sinking and threatens to slip below $1,800 an ounce for the first time since July.

In addition, the Index of small-cap stocks set a new record high Tuesday. Often the RUT is thought of as an index that best reflects the domestic economy, since its smaller stocks tend to have less international exposure. The RUT has been on a roll lately, up 23% since the end of September. In comparison, the SPX is up just 7.5% over the same time frame.

These things—along with a Cboe Volatility Index () now flirting with its post-pandemic lows —suggest a “risk-on” trade really taking hold after some fits and starts earlier this month.

However, it’s important not to get carried away, because a few economic signals aren’t exactly lighting up the room and a tough winter may be ahead due to COVID-19. Also, some contrary indicators like investor sentiment hit high levels recently. Some market watchers say this can sometimes suggest weakness ahead. VIX popped back above 22 this morning and the bond market seems to be getting a slight bid. , however, continues to soar and sits at post-pandemic highs above $45 a barrel.

The question as we head into Wednesday’s session—likely to feature light-volume pre-holiday trading—is whether these gains can hold. The pattern in recent weeks is that stocks roar out of the starting gate and then slowly tire as the weekend finish line approaches. You can’t necessarily rule out profit-taking today and Friday (a holiday-shortened session), but there is a little less geopolitical worry compared with a few weeks ago. It’s possible geopolitics played at least some role in making people nervous about holding long positions into the last two weekends.

Whatever ultimately happens, volume is likely to be light the remainder of the week, meaning the action could get judged as less meaningful. Market Update won’t publish tomorrow, but will return Friday morning.

One cautionary note popped up Tuesday when headline consumer confidence for November failed to meet analysts’ expectations at 96.1 (the consensus on Wall Street had been 96.5, according to research firm Briefing.com). The figure was also down from October’s upwardly revised 101.4. More alarmingly, the Expectations figure fell pretty dramatically from October to below 90 for the first time since August. “Attitudes about business conditions for the next six months have worsened,” Briefing.com said.

That’s just one data point, but combined with some other ones recently it doesn’t necessarily point to continued meteoric gains. There also appears to be what analysts call “froth” in the market, like Tesla’s (NASDAQ:) shares rolling up 6% gains Tuesday despite a lack of news. This isn’t to rain on anyone’s parade, only to say that long-term investors should consider avoiding the urge to get caught up in the FOMO, or “fear of missing out” kind of trading that can happen at times like these.

Don’t count out possible spillover strength from media reports this week that President-elect Joe Biden could choose ex-Fed Chairman Janet Yellen for Treasury secretary. It’s a good probability that Yellen’s name helped the market gain traction Tuesday thanks to her reputation as a policy dove and someone who’s hands-on about trying to help the economy (and by association, the markets). Certainty around the election and cabinet appears to have helped market confidence.

The Fed already has already committed to long-term low rates, so having Yellen down the street from Fed Chairman Jerome Powell sounded pretty good to many investors. Speaking of Powell, Fed minutes from their last meeting are due for release later today. So are the monthly Personal Consumption Expenditure (PCE) prices, an inflation gauge the Fed watches closely. 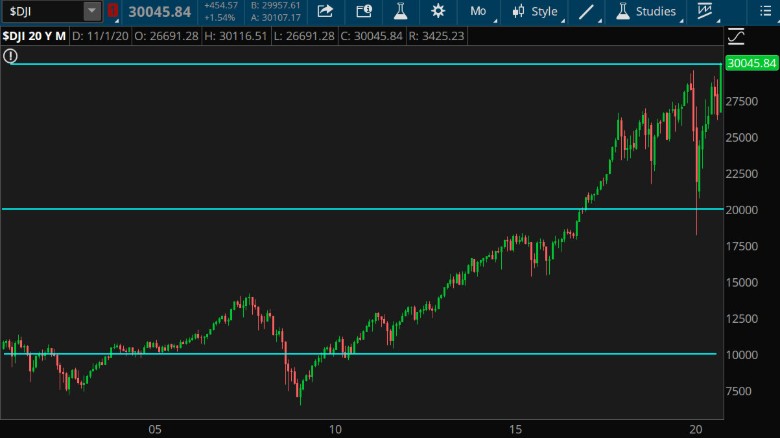 CHART OF THE DAY: THE LONG ROAD TO DOW 30K. The venerable Dow Jones Industrial Average ($DJI—candlestick) closed above 30,000 for the first time ever Tuesday. But it’s not been a straight line. As this 20-year chart (with lines at each 10,000 mark) shows, after first eclipsing 10,000, it rose to over 14,000, then was cut in half during the 2009 financial crisis. Though it breezed through the 20s over the last three years, it stopped just short of 30,000 before the pandemic earlier this year. Data source: S&P Dow Jones Indices. Chart source: The thinkorswim® platform from TD Ameritrade (NASDAQ:). For illustrative purposes only. Past performance does not guarantee future results.

Mega-Caps Take the Sidelines: If you’re lucky, maybe you can remember that amazing feeling the first time you swam across a pool by yourself as a kid, with no mom, dad, or teacher helping you out. In a way, the entire market might be enjoying that feeling right now, because it’s not just staying afloat but actually getting close to lapping all-time highs without much support from Apple (NASDAQ:) or the other “mega-cap” stocks. These six stocks—which also include both share classes of Alphabet (NASDAQ:, Amazon (NASDAQ:), Facebook (NASDAQ:), and Microsoft (NASDAQ:)—continue to make up a hefty percentage of the S&P 500 Index on a valuation basis, and still accounted for a big amount of the SPX’S 2020 total return through mid-November. In recent weeks, however, their influence has waned a bit. The Dow Jones Industrial Average, which includes MSFT and AAPL, surpassed 30,000 on Tuesday even though neither MSFT nor AAPL were among its top-10 daily gainers. AAPL has actually had a pretty tough week and is flat over the last month.

In a sense, it feels like the market’s training wheels are off, or it’s making that first solo doggy-paddle across the pool. While AAPL and MSFT both rose Tuesday, it was companies like Boeing (NYSE:), JPMorgan (NYSE:), Chevron (NYSE:) and Goldman Sachs (NYSE:) leading the $DJI higher. It’s just one day, but the trend lately has favored the more “cyclical” sectors that tend to do better in an improving economy. Energy, financials and industrials easily outperformed info tech and communication services over the last month, and that feels like a positive trend.

Separate Ways: ’s having an interesting week on the charts that might reflect more investors embracing risk. It fell below a firm support line near $1,850 on the charts that had held pretty much since mid-summer, and finished just above $1,800. Maybe monitor this market to see if the trend can hold. Gold is now down double-digits from its August all-time high, putting it officially into correction territory. It’s still up sharply year-to-date, however.

A metal that tends to zig when gold zags is , and it’s also worth watching for insight into the global economy. Copper, if you haven’t noticed, has been on an absolute tear, corresponding in part with the rally in electric vehicle stocks (EVs use more copper than normal cars). Copper closed above $3.30 on Tuesday and is near levels last seen in December 2017.

Giving Thanks: Despite the market’s recent advance, there’s still a lot of economic and illness-related stress across the country. Let’s not forget this on Thanksgiving, and also let’s remember to be thankful to so many people in the medical profession, first responders, food workers, teachers and everyone else who continue to face COVID-19 exposure through the very nature of their jobs. Not everyone has the choice to stay at home. We all hope a vaccine becomes available soon to protect these courageous employees.