Ahead of U.S. election, Europe eyes an ally in climate change fight By Reuters 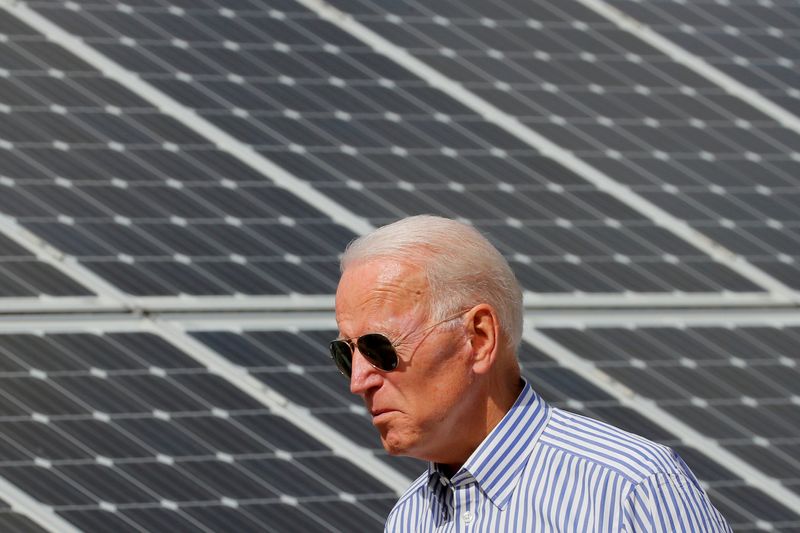 By Kate Abnett and Valerie Volcovici

BRUSSELS/WASHINGTON (Reuters) – For countries hoping to avoid the worst of climate change, next month’s U.S. presidential election will be pivotal in determining the course of global climate action, experts say.

A win for the Democratic candidate, former Vice President Joe Biden, would inject new life into global cooperation in reducing greenhouse gas emissions, according to past climate negotiators. A second term for President Donald Trump, on the other hand, could prove more disruptive than his first by emboldening climate-sceptic countries.

“The U.S. needs to get back in the game,” said Kelley Kizzier, a former EU climate negotiator who now works at the non-profit Environmental Defense Fund.

Under the 2015 Paris Agreement, almost 200 countries pledged to work toward limiting global warming to 1.5 Celsius (2.7 Fahrenheit) above pre-industrial levels. That goal has since slipped further away, as climate-warming emissions continued to increase. Trump rejected the agreement altogether and the United States is set to exit it on Nov. 4.

A Biden win, experts say, could help put those efforts back on track. Biden wants to spend $2 trillion over a four-year term toward reaching net-zero emissions by 2050 in the United States, currently the No. 2 emitter of greenhouse gases. Committing further to slashing emissions this decade could nudge China and other high-polluting countries to follow suit.

“If the United States, China and the European Union move in that direction, then I believe we can take the rest of the world along with us,” Frans Timmermans, the European Union’s top climate official, told a Reuters event last week.

Countries have been asked to update their Paris pledges this year. So far only 14 have, including Norway, Chile and the tiny Marshall Islands. The 27-country EU plans to upgrade its pledge in December.

China, the world’s largest emitter, says it will become carbon neutral by 2060, but has not yet revised its climate plan for the next decade.

U.N. scientists said in a major report last November that without steep emissions cuts by 2030, the world will be unable to prevent catastrophic climate change.

Biden, who would take office in January if he wins the Nov. 3 election, has pledged to immediately rejoin the Paris Treaty. That would oblige Washington to make a fresh emissions-cutting pledge well ahead of the next U.N. climate summit in November 2021.

“Biden will have to move forward in the early days of the administration,” said John Podesta, a counselor on climate and energy to President Barack Obama who is now an informal adviser to Biden.

“Other countries will begin to judge the administration’s level of ambition based on that,” Podesta told Reuters.

While many U.S. states, cities and businesses are already cutting emissions, the country is still falling short on the Obama-era pledge to cut emissions by 26%-28% by 2025, against 2005 levels.

Trump, who has rejected mainstream science on climate change, has unravelled Obama-era regulations, seeking to free the energy and auto industries from the costs of regulations meant to protect health and the environment.

But that “needs to just be the starting bid”, said Thom Woodroofe, a former diplomat in U.N. climate talks, now a senior advisor at the Asia Society Policy Institute. A “united approach” from the EU and the United States could push Beijing to go further, particularly on near-term emissions cuts, he said.

Podesta suggested that the EU and the United States imposing carbon taxes on imports could work toward that end. Brussels will propose a policy next year to impose such costs and Biden has pledged to introduce one.

Maintaining pressure on China will be especially important as Beijing decides on funding for coal plants under its next five-year economic plan.

“The discussions with China are not over,” said Laurence Tubiana, a former French diplomat instrumental in brokering the Paris accord, who now heads the non-profit European Climate Foundation.

But restoring diplomacy on climate could face obstacles, not least because of the frictions between the United States and China under Trump on other issues.

This week, Beijing published a stinging document on the U.S. environmental record, calling Washington a “consensus-breaker” and a “troublemaker” and saying the Trump administration’s measures had undermined global climate cooperation.

“Nobody did, except Europe,” said Nils Torvalds, a Finnish lawmaker who was part of European Parliament’s delegation at the event. The summit coincided with the EU striking a deal to slash emissions to net zero by 2050. Meanwhile, the U.N. event failed to reach agreement on rules for international carbon trading.

“We were unable to get as many decisions as we would have liked, because we were alone,” Torvalds said.

A Trump win could slow this further, some experts worry. Dutch lawmaker Bas Eickhout, who led the European Parliament’s delegation to Madrid, said it could embolden Russia, Brazil or other countries to disrupt climate collaboration.

“Trump’s unpredictability has become a bit more predictable,” Eickhout told Reuters. So “countries who didn’t like climate anyhow might seize the opportunity to put more brakes on the process of Paris.”

“A second term of Trump will be exponentially worse for climate than the first.”