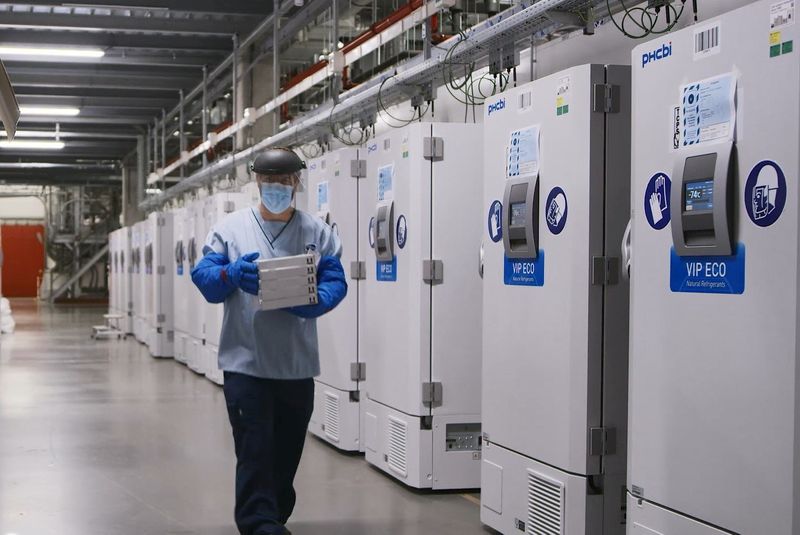 By Laurence Frost and Ilona Wissenbach

PARIS/FRANKFURT (Reuters) – Airlines are scrambling to prepare ultra-cold shipping and storage facilities to transport COVID-19 vaccines developed by Pfizer and Moderna , whose doses, which require deep freezing, are likely to be among the first to be distributed.

A recent survey by an air cargo association and a drug shippers’ group found only 15% of industry participants felt ready to transport goods near the minus 70 degrees Celsius (-94°F) required by the Pfizer Inc (N:) vaccine, while around 60% could meet Moderna Inc’s (O:) less stringent -20°C requirement.

Typically, airlines use containers with cooling materials such as dry ice to transport pharmaceutical products, but some don’t have temperature controls, making products susceptible to unforeseen events such as flight delays.

Airlines are now considering options ranging from a large plug-in freezer that can cost about as much as a small car to a multi-layered canister that uses liquid nitrogen to ship vaccines requiring a deep freeze.

The potential demand for such high-end packaging has helped shares of cold container specialists such as Cryoport Inc (O:) and Germany-based va-Q-tec (DE:) more than double in recent months.

Air France-KLM (PA:) said it was gearing up for a test run with one of the drugmakers – it declined to say which – that will see dummy samples shipped at ultra-low temperatures, likely via Amsterdam’s Schiphol airport.

The drill will use boxes carrying as many as 5,000 doses each, all cooled by dry ice, Air France-KLM special cargo manager Béatrice Delpuech told Reuters. Later shipments may also use larger ultra-cold containers rented from va-Q-tec.

“They need to validate the entire logistics chain from end to end, including the air freight segment,” Delpuech said. “We have a dedicated task force examining every step of the process with all our teams, to make sure there are no hitches anywhere.”

But one difficulty with vaccine transport is that airplanes can only carry a limited amount of dry ice – frozen carbon dioxide – as it turns into gas over time, displacing the breathable air in the cabin.

All widebody planes can carry a maximum of around 1 tonne of dry ice in refrigerated and insulated containers, according to a DHL white paper on vaccine transport.

“Depending on the type of aircraft, there are usually not more than a few containers on board at the same time,” said Joachim von Winning, chief executive of Air Cargo Community Frankfurt.

For an alternative, Deutsche Post AG’s (DE:) DHL has been using Cyroport’s capsule containers, which use liquid nitrogen to keep goods as cool as -150C for up to 10 days to support clinical vaccine trials, said Patricia Cole, DHL Global Forwarding’s global head of temperature management solutions.

Although it is relatively a small-scale solution, with only hundreds of vials in each container, broader preparations have already begun.

Pfizer, which is working with DHL, FedEx Corp (N:) and United Parcel Service Inc (N:) for vaccine distribution in the United States, said on Monday it has launched a pilot delivery programme in four states to help it refine its nationwide and global shipping plan.

The U.S. drugmaker has also developed temperature-controlled and GPS-enabled boxes that use dry ice to keep its vaccine at around -70C for up to 10 days.

But cold-chain solutions providers such as Sweden’s Envirotainer say so-called active containers, which use electric motors to cool their contents, are safer and more cost-effective.

A Envirotainer spokesman said that its fleet of active temperature-controlled containers was twice that of its competitors and that it was preparing to increase its capacity by 50%.

Va-Q-tec also said this month that it would significantly expand its container fleet over the coming months in anticipation of orders COVID-19 vaccine transport.

Airlines have become more reliant on cargo for revenue this year as passenger numbers plunged amid pandemic-related travel restrictions.

Accenture (NYSE:)’s Seabury Consulting estimates the global roll-out of a vaccine will generate 65,000 tonnes of air freight, which is five times the air vaccine trade in 2019.

But airlines think the potential for the vaccine to allow a return to normal travel is most important, KLM chief executive Pieter Elbers said at a CAPA Centre for Aviation event on Nov. 11.

“I think overall for the entire industry, the vaccine is going to be much more important than the cargo revenues it would bring,” he said.