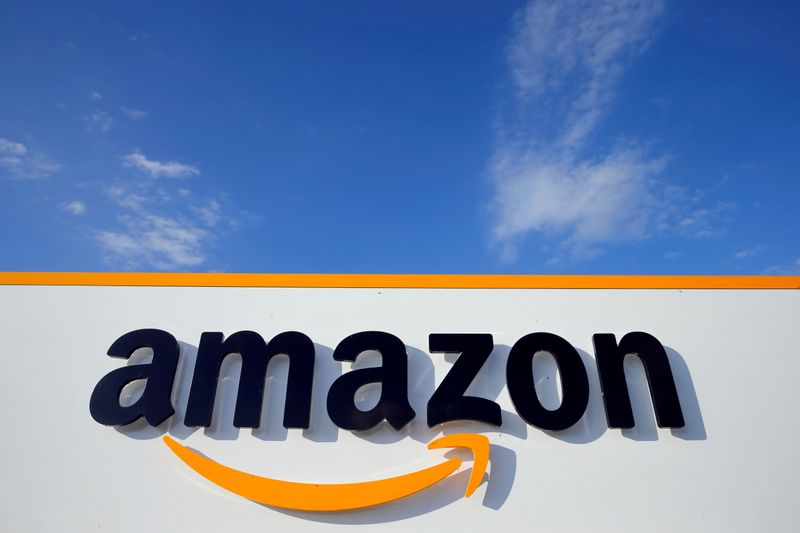 © Reuters. FILE PHOTO: The logo of Amazon is seen at the company logistics centre in Boves, France, August 8, 2018. REUTERS/Pascal Rossignol

By Nivedita Balu and Jeffrey Dastin

The home robot is designed to take up tasks such as home monitoring, setting up routines and reminders, and can play music and TV shows while rolling around the house.

The device, which has digital eyes on a rotating screen mounted on wheels, is available at an introductory invite-only price of $999.99 and regular price of $1,449.99.

Among other launches in its latest lineup were a smart thermostat, smart display Echo Show 15 and a new health-tracking band called Halo View.

The Echo Show 15 can be mounted on a wall and is powered with AZ2 Neural Edge, a processor that helps users personalize the screen.

In its push to appeal to the next generation of customers – kids – the company introduced Amazon Glow, a gadget for playing games, reading or drawing while on a video call.

In its partnership with Disney, it will launch an Alexa-powered voice assistant at Disney’s theme park hotels, along with a paid feature that lets customers interact with Disney characters at home.

The feature is expected to launch next year and will let users interact with Disney characters with the ‘Hey, Disney!’ voice command.

Amazon has launched a number of new gadgets every year, including sunglasses with voice control and an in-home drone, that have not become massive sellers.

Devices make up for a fraction of Amazon’s overall sales.