An alt chain with interoperability on the horizon 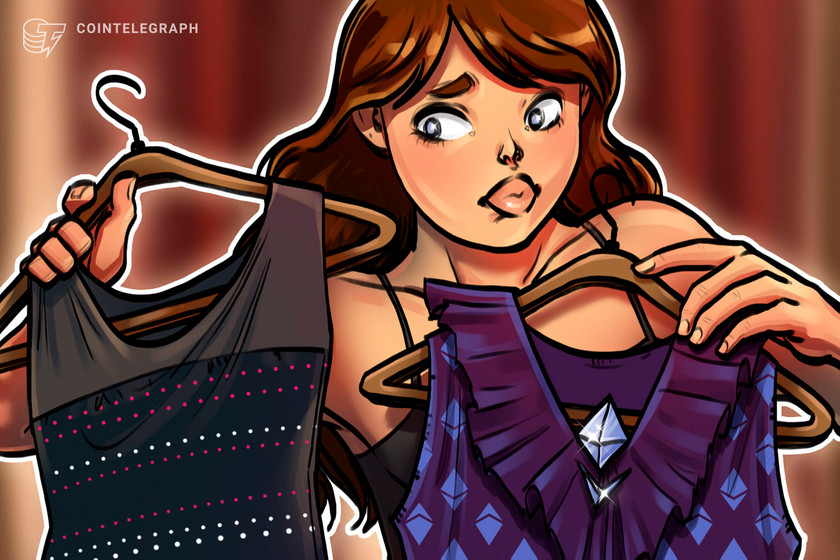 The Polkadot blockchain platform only launched its mainnet in May, but it is already pushing to become a major competitive force in the sector. In late August, following a DOT token redenomination, Polkadot smashed into the top 10 cryptocurrencies, overtaking established altcoins such as EOS, Litecoin (LTC) and others.

Kelvin Koh from Asian crypto fund Spartan Black previously said that Polkadot could rank in the top three blockchains. Elsewhere, Dan Morehead from Pantera Capital Management also recently shared his sentiments with Bloomberg, highlighting that although Polkadot is currently trading at around 10% of Ethereum’s value, his firm believes it has a “much higher than 10% chance of being a competitor to Ethereum.”

Although there is endless speculation about which factors drive Ether’s price, one trend has emerged over its lifetime: As more developers build applications with user appeal and value, the price outlook of Ether looks more bullish.

If the same is true for Polkadot, then the analysts’ predictions look promising. The popularity of decentralized finance caused the price of ETH to double this summer. Now, DeFi developers also appear to be looking toward Polkadot, keen to take advantage of fast throughput, the Substrate development framework and ultimately — interoperability.

However, Peter Mauric, head of public affairs at Parity Technologies, told Cointelegraph that there is vast potential for Polkadot to expand the DeFi ecosystem beyond its current capabilities, saying that parachains are a different type of smart contract that will enable a different degree of implementation. He elaborated further:

“Once we have these turbo-charged DeFi primitives, the potential for new innovation is greatly expanded, and we see interesting new possibilities like decentralized Sovereign Wealth Funds and cross-chain money markets providing the basis for the next generation of DeFi protocols.”

Many of these new DApps and parachains are also receiving the boost of grant funding from Polkadot’s main sponsor, the Web3 Foundation. Mauric confirmed that the Polkadot treasury is also disbursing funding trustlessly, on-chain, to projects looking to build on Polkadot. So, who’s involved in Polkadot’s DeFi ecosystem, and how do they compare to their Ethereum counterparts?

Acala is a decentralized finance hub, billed as an “all-in-one DeFi service center.” It offers some features comparable to Maker, allowing users to lend and borrow its aUSD stablecoins. However, it also operates a decentralized exchange under an economic model called a “decentralized sovereign wealth fund,” designed to provide an ongoing means of sustaining the development ecosystem. Acala was also one of the first to participate in a new Polkadot-specific crowdfunding model known as the initial parachain offering.

Acala is a classic example of a project leveraging the high customization capabilities of Substrate. Bette Chen, co-founder of Acala, told Cointelegraph: “By using Substrate to build Acala, we can, for example, customize the fee schedule and allow users to pay fees in any accepted tokens. The upside of innovation is uncapped, as we can add new features and fix issues without hard forks.”

Mantra DAO is a community-governed DeFi platform for staking, lending and governance. The platform’s OM token confers voting rights that influence various factors such as inflation levels or interest rates. Mantra DAO will operate on the Rio Chain infrastructure and is on the path to becoming a fully decentralized DAO governed by its community.

Mantra DAO sees scalability and interoperability as major selling points of being based on Polkadot, as Will Corkin, co-founder and council member, explained to Cointelegraph: “Interoperability is a stride towards bringing DeFi mainstream and getting rid of the current network problems that platforms on Ethereum face.” He further added: “Not only can we bring Ethereum DeFi to Polkadot, but we can bring all of DeFi to all peers across all platforms.”

Another project, StaFi (short for Staking Finance) is a protocol that allows users to unlock the liquidity tied up in staked tokens. It works in a comparable way to Yearn.Finance or Compound, issuing synthetic tokens called rTokens that represent a stake in the pool and can be used in other protocols. Along with Web3 grants, the project has received backing from B-Tech, a tech accelerator affiliated with the Bitmax exchange.

Uniswap’s Polkadot equivalent is Polkastarter, a decentralized exchange allowing users to launch interoperable token pools with cross-chain swaps. Projects can list their tokens and use the platform to crowdfund in a decentralized auction. The development team has created a proof-of-concept on Ethereum, with a roadmap including migration to Polkadot from early 2021.

Equilibrium is another project migrating to Polkadot from a different blockchain — EOS. It started as a MakerDAO equivalent, but with the move to Polkadot, it plans to expand its range of products to include a decentralized exchange, a synthetic asset platform and a newly interoperable stablecoin.

A bridge to Ethereum DeFi

Moonbeam is a Polkadot bridge parachain to Ethereum, enabling developers to build Ethereum-compatible smart contracts. Using Moonbeam, DApps can integrate with other blockchains, including Bitcoin. It also means that existing Ethereum-based front ends can connect to Moonbeam to interact with Polkadot-based DeFi applications.

Speaking to Cointelegraph, Derek Yoo, CEO of Moonbeam developer PureStake, elaborated on the functionality: “Moonbeam allows ERC-20 tokens to move between Ethereum and Polkadot, which is needed to power cross-chain deployments where you have an instance of the application on both platforms.”

Moonbeam is already finding traction with Ethereum-based DeFi projects wanting to expand into Polkadot. It has announced several partnerships with prominent DeFi projects, including SushiSwap, BetProtocol and Linear Finance, and Yoo indicated that there are more in the works.

Ethereum DeFi has grown organically, with multiple innovators coming along and building upon the work of their predecessors. However, many projects on Polkadot are seeing an opportunity to put infrastructural layers in place using Polkadot parachains for cross-chain transfers of assets and transactions.

Rio DeFi’s Rio Chain is a Polkadot parachain built using Substrate and provides a ready-made suite of tools for DeFi DApp builders. These include the Rio Generic Asset Bridge, which supports simultaneous cross-chain transfers of multiple assets. All of Rio’s core tools are accessible using the project’s website interface, including the Rio Wallet and Rio Block Explorer.

The team behind Rio Chain foresees several cross-chain DeFi use cases, including a Bitcoin lending platform, a Bitcoin saving account application, and instant stablecoin loans based on a crypto portfolio. Furthermore, Rio Chain believes that there is room to disrupt the global market for e-commerce payments by removing intermediaries such as PayPal that earn significant revenue from taking a share of merchant payments.

Bithumb Global is also initiating its own parachain on Polkadot, called Clover. Aimed at stimulating DeFi development, Clover will seek to leverage cross-chain capabilities and include some of Bithumb Global’s own in-house apps, including a decentralized exchange, wallets and lending protocols. Norelle Ng, managing partner at Bithumb Global, told Cointelegraph that the availability of infrastructural layers such as Clover will ultimately help drive improvements in the DeFi user experience: “The modules that are made available in Clover will greatly reduce the technology development threshold for upper-layer applications.”

Akropolis is an established project on Ethereum that provides open-source protocols for DeFi DApp developers — effectively an operating system for DeFi. In the context of Polkadot DeFi, it has received a Web3 Foundation grant to provide platform-as-a-service for Substrate nodes. It also offers a staking portal as a front end for the Polkadot chain. Akropolis is already integrated with Ethereum DeFi DApps, including Compound and Aave.

A long road still ahead

Based on the scale of development, things are looking promising for Polkadot DeFi. Many projects are already starting to take advantage of interoperability offered by the system. Polkadot is also attempting to make headway in attracting developers from other platforms.

However, it will take some time for the vision of interoperability to fulfill its true potential, mainly due to the current lack of composability between Ethereum and Polkadot applications. For example, it’s not yet possible to take out a flash loan on one platform to profit from arbitrage at different decentralized exchanges across other platforms. Mauric said that Polkadot is on a path to achieve composability and acknowledged that it’s a critical development:

However, until cross-chain composability is a reality, there’s a risk that many DeFi DApps on Polkadot will simply seek to replicate existing applications on Ethereum. After all, this has already happened with Binance Smart Chain, where DApps such as BurgerSwap or BakerySwap opted to copy Ethereum-based SushiSwap.

The value of simply copying existing apps is arguably questionable. Therefore, Polkadot DeFi will need to up its offering to entice users away from Ethereum’s composable and liquid DeFi ecosystem.

Ultimately, it’s still a matter of time to see whether Polkadot will steal the DeFi crown from Ethereum. However, perhaps a more pressing question is whether Polkadot can eventually improve upon DeFi to enhance adoption and make it more user-friendly and accessible to everyday investors and consumers. Beyond interoperability, that would seem to be the ultimate achievement.