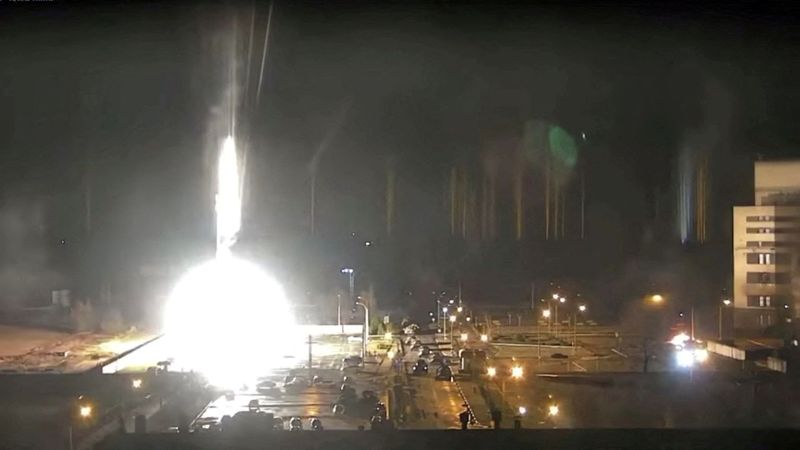 Russian forces seized the Zaporizhzhia nuclear power plant in Ukraine on Friday after heavy fighting sparked a huge blaze in a training building at the site. The fire was extinguished and officials said the facility was safe.

But the seizure, a week after Russian troops took over Ukraine’s defunct but still radioactive Chernobyl plant, triggered global alarm about vulnerabilities of nuclear energy to wartime attacks that could unleash deadly radiation.

“You have to take more seriously the need to ensure protection in nuclear plants, not only for natural disasters, but also for manmade ones,” said Edwin Lyman, the director of nuclear power safety at the Union for Concerned scientists.

Linda Thomas-Greenfield, U.S. Ambassador to the United Nations, told an emergency meeting of the U.N. Security Council on Friday that the attack on Zaporizhzhia was “incredibly reckless and dangerous. And it threatened the safety of civilians across Russia, Ukraine and Europe.”

The U.S. Embassy in Ukraine called the Russian assault on the plant a “war crime”.

Henry Sokolski, head of the Nonproliferation Policy Education Center, a nonprofit group, said the attack struck a blow to the nuclear power industry as a whole:

“The nuclear reactor in Ukraine didn’t take a hit last night as big as nuclear power will if officials factor in the military vulnerability of these machines,” he said.

Plans to develop nuclear power, which generates electricity while emitting virtually no greenhouse gases, have accelerated in recent years as governments pledge to fight global warming.

There are now 58 reactors under construction and 325 proposed around the globe, according to the World Nuclear Association. Many proposed plants are in Eastern Europe.

The White House said in November that U.S. company NuScale Power LLC had inked plans with Romania to build a small modular reactor (SMR) plant, adding the agreement positioned “U.S. technology to lead in the global race for SMR deployment.”

Last month NuScale, majority owned by construction and engineering company Fluor Corp (NYSE:), signed an agreement with Polish company KGHM Polska to build another small modular reactor plant in Poland by 2029 as part of an effort to reduce dependence on coal, which emits large amounts of carbon dioxide and lung-damaging soot when burned.

NuScale also signed an agreement in December with Kazakhstan Nuclear Power Plants LLP (KNPP) to explore the deployment of the power plants in that country.

Diane Hughes, a NuScale spokesperson, said the Zaporizhzhia “incident once again highlights the fact that nuclear energy plants have robust, resilient and redundant safety features” and that its technology is even safer.

And in January, Westinghouse Electric Co signed cooperation agreements with 10 Polish companies for the possible construction of six AP1000 conventional nuclear reactors. It also signed a memo with Rafako SA on the possibility of developing nuclear plants in Ukraine, Slovenia and the Czech Republic.

Cathy Mann, a Westinghouse spokesperson, said “nuclear energy is a safe, carbon-free source in Ukraine and around the world.”

Third Way, a Washington-based think tank that supports nuclear power, said the severity of climate change means the world must rapidly increase nuclear energy in the next few decades despite the risks.

“No energy source is entirely without risk,” said Josh Freed, the group’s senior vice president for climate and energy. “If (Russia President Vladimir) Putin wants to kill countless people by blowing up a dam or attacking a nuclear plant, he could do it. But the fact is … nuclear plants are incredibly safe,” Freed said.

Lyman from UCS dismissed as “glib talk” contentions that new nuclear reactors will be “so safe and they can be deployed, essentially anywhere in the world with minimal protection.”

The Nuclear Energy Institute, the U.S. industry group, told Reuters it believes nuclear reactors are safe and Russia’s invasion of Ukraine only reinforces the need for Europe to expand its nuclear energy capacity.

Russia is currently a major supplier of to Europe’s power plants.

“We expect that the tragic events of the past weeks will only increase interest in working with the United States on next-generation nuclear energy deployment,” said John Kotek, senior vice president of policy development and public affairs at NEI.