Another Strong Month For Jobs In Australia


The latest report by the Australian Bureau of Statistics (ABS) showed that the labor market data beat the expectations with growth surging. The data underlined that Australian employers added more full-time job amid the jobless rate staying the lowest in seven years.

The jobs report boosted the confidence of the policymakers in the Australian economy. Official data showed that the economy added a total of 39,100 jobs during January. This came as December’s figures scored lower to a still substantial number of 16,900. 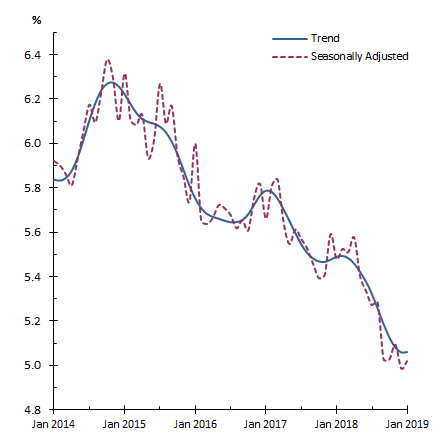 January’s payroll figures beat the estimates which pointed to a 15,000 increase during the month. While the surged on the news, the gains did not hold. One of the major banks in Australia, Westpac Banking Corp. announced a rate cut later this year.

The announcement came as the bank cited slowing economic growth and moderate inflationary pressures. The bank, in its outlook, however, pointed to the latest jobs report as a risk to its financial outlook.

The data comes as the RBA held its , and kept the key unchanged at 1.50%. This saw Australian interest rates holding steady for nearly two and a half years. Officials continue to stay hopeful for the labor market to pick up strength which could push wages and inflation higher.

The markets are currently expecting the RBA to hold interest rates at 1.50% for at least until early 2021.

Australia’s property market has been in decline and is a significant cause for concern among the policymakers. The significance of the jobs report was crucial as recently, , the deputy governor the RBA, talked about the importance of the labor market in the economy. “Our main job is to make sure that the economy continues at a reasonable pace, with a low level of ,” he said, noting that it was vital as it allows people to manage their mortgages.

The RBA Governor Philip also said that the RBA would be looking to a rate cut only if the unemployment rate continued to rise.

The latest labor market report comes in line with the RBA’s expectations which hopes will see a rise of 2.2% increase than the 1.6% increase in population. The Australian unemployment rate holds steady at 5.0% which marks a seven and a half year low. The unemployment rate held steady for the second consecutive month.

The jobs report brought some bout of confidence to the policymakers who should remain on the sidelines as far as it concerns the rate hikes.

Under the current conditions, a lower unemployment rate and a robust jobs market amid lower interest rates could feed into the economy over time eventually. This could also potentially stem the decline in the property markets in cities such as Sydney and Melbourne.

Some leading indicators point to a continued period of strength in the Australian labor market. Also, employment growth should rise, both of which are positive signs for household spending to improve.

This, in turn, should give a boost to inflation. In a separate report, data showed that the number of jobs advertised rose to the highest level in nearly six and a half years.

Despite the overall strong jobs report, Australian dollar faces bumps ahead. This is due to the rate cut announcement from Westpac, which overshadowed the jobs report release.