For the third Monday in a row, major indices started with enthusiasm as a major medical company shared solid effectiveness data. This time it’s AstraZeneca (NASDAQ:) saying the vaccine it’s developing with Oxford University has an average efficacy of 70% against COVID-19. This happened after a weekend when medical experts said it’s possible one or more vaccines could be available by mid-December.

Last week began with a bang and then whimpered into the weekend amid shutdown concerns. Those haven’t gone away and could still be a barrier to big gains in this holiday-shortened stretch. These are tough times, even if the prospect of vaccines makes things a little less dark. There hasn’t been a lot of enthusiasm the last week or two in terms of testing recent market highs, but major selloffs haven’t happened, either. Instead, the market sleds along just below the all-time peak and doesn’t appear to have much direction.

The old Wall Street adage is “never sell a dull market,” but we’ll see if investors pay heed. Risk-on does seem to be the game early Monday, however, with bond yields and ticking higher and volatility edging down. We’ll see how long it lasts. Lately, every time we get positive vaccine news, crude pops and rates move a little higher, which is positive.

Last week saw a few days where selling picked up in the last hour of the session, and Friday was one of them. The had been down about 0.2% heading into the final hour, but then crumbled to finish 0.68% lower and near its low for the session. Ten of the 11 S&P 500 sectors ended in the red Friday, and the market never really regained the exuberance it showed earlier in the week.

Needless to say, late-weakness day action isn’t a sign of strength—especially going into the weekend—but rather points to a lack of conviction. When things were falling apart earlier this year, heavy selling late on Friday’s was common. That’s not to say things now look anywhere near as bad as back then, but it’s still a little disconcerting to see what appears to be many traders not wanting to carry long positions into the weekend. Some of it could be related to turmoil in Washington, D.C., but it also just feels like the market is tired after its ferocious rally.

Remember, major indices are coming off two months in a row of negative returns. It looks like that turned around in November even if the recent weakness extends to the end of the month. But it’s hard to get too optimistic in the near term amid the daily drumbeat of more COVID-19 cases, schools closing, and no stimulus on the horizon.

Fund manager BlackRock (NYSE:) upgraded U.S. equities to overweight, but called for a “nuanced approach” due to the virus impact on the economy. File this with other recent Wall Street firms expressing optimism about the U.S. emerging from virus darkness in 2021.

Thanksgiving week is traditionally one where traders start leaving early for the holiday, meaning by Wednesday, trading could be awfully light and by Friday the question could be whoever’s last turns out the lights. Maybe more people stick around the market this year since there’s likely to be far less travel than usual, but even so, be prepared for a low-volume environment where price moves could be more dramatic as buyers and sellers work harder to find each other.

Anyone trading should consider taking extra care and keeping positions smaller than they otherwise might. And if you trade weekly options, remember there’s an expiration on Friday—and the closing bell rings three hours early.

Volatility did pick up a bit at the end of last week, but not toward levels that would scare the children, so to speak. The Cboe Volatility Index () ended last week under 24, which is pretty calm compared with its reading most of this year. However, it’s never really made much of a move to get down toward 20, near the historical average. The last time it was under that was in mid-February just before the virus headlines really exploded. VIX fell early Monday but remained above 23.

It is interesting to see futures traders expecting VIX to rise over the next few months toward the 26 level by February. Again, that sounds relatively low if you think of it in the context of VIX being 80 earlier this year. However, a VIX at 26 would have been considered pretty high in pre-pandemic days, and suggests that a lot of uncertainty remains built in that might hinder any quick re-tests of recent stock index highs.

It’s not a huge week for data, considering the holiday falls right smack in the middle of things. Still, if you’re looking for numbers to contemplate over your turkey and pumpkin pie, the calendar does include data on consumer confidence, Q3 gross domestic product (GDP), durable goods, and personal consumption expenditures.

Earnings season is winding down, but a few stragglers are reporting in the retail space this week. Some to consider watching include Nordstrom (NYSE:), Best Buy (NYSE:), Gap (NYSE:), Dick’s Sporting Goods (NYSE:) and Dollar Tree (NASDAQ:). Look around and you can find analysts saying trends are starting to look a little better for companies like JWN. We’ll have to wait and see, because the retail sector isn’t easy to peg. So many factors play into why one company does well and another doesn’t, and it’s sometimes hard to see the forest for the trees. 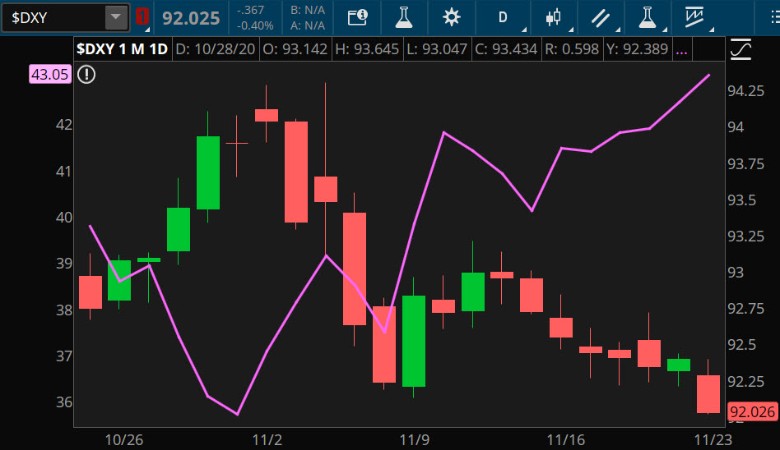 CHART OF THE DAY: DOLLAR TAKES A BEATING. It’s been a tough month for the ($DXY—candlestick), which is down toward its post-COVID-19 lows. That’s possibly supportive for U.S. companies selling their products overseas, and it also tends to raise commodity prices. As we can see here with crude (/CL—purple line). Data Sources: ICE (NYSE:), CME Group (NASDAQ:). Chart source: The thinkorswim® platform from TD Ameritrade (NASDAQ:). For illustrative purposes only. Past performance does not guarantee future results.

Season in Review: Earnings season is about as over and done as the 2020 Chicago Bears, so let’s look at some key metrics, provided by research firm FactSet. Major takeaways from Q3 include:

Shopping Outlook: With the holidays straight ahead, you don’t have to search very hard for experts predicting what sort of shopping season we’re going to have. However, there’s no real consensus shaping up. For instance, a Master Card survey last week said 59% of shoppers plan to spend the same or more on holiday shopping this year than last, while a separate survey by Goldman Sachs (NYSE:) found that around 53% of 1,000 consumers plan to spend less this holiday season—including 20% who said they planned to spend “substantially less.” The shopping period we’re heading into can likely make or break Q4 gross domestic product (GDP), but there’s more to it than simply buying gifts. With travel expected to be way down because of the virus, other parts of the economy like airlines, cruise ships, casinos, and restaurants could consider to sputter even if people spend more on gifts. And the real reckoning could come in mid-January when consumers start to get those credit card bills in the mail, especially if there’s no government stimulus by then.

Looking Ahead? The market is supposed to be forward-looking, but the reality is it’s hard to look past what’s been going on the past couple of weeks. The major concern is people going into lockdowns in major parts of the country. What is that going to mean for businesses? Some analysts sound optimistic about the economy gaining traction with a fiscal stimulus by late January or early February, but those predictions could make investors scratch their heads. Does a stimulus get done that quickly? It seems unlikely.

These growing worries could be reflected in the bond market, as the slid to 0.83% by the end of last week before rising to 0.85% by early Monday. That’s a long way from flirting with 1%, like it did earlier this month. On the other hand, crude—another economic barometer—had a pretty decent week and ended Friday near the highs of its recent trading range above $42 a barrel. Dollar softness could be a supportive factor for crude and some other commodities if it continues (see chart).