Are The Bitcoin Bulls Back? Here’s Where BTC May Be Headed Next


After falling more than 50% below its all-time high, the bulls roared back to life, driving the king of cryptocurrencies back above key technical resistance levels. Here’s our take on what may come next…

Bitcoin’s bullish reversal off the July 21 low picked up steam last week, enabling both Bitcoin (BTC) and (ETH) to break out above key technical resistance levels.

Both BTC and ETH reclaimed support of their 50-day moving averages, a pivotal “line in the sand” for determining an intermediate-term trend of a crypto asset.

In addition to moving back above their 50-day moving averages, both Bitcoin and Ethereum also rallied above horizontal price resistance of their prior highs from June 2021.

On July 30, Bitcoin formed a higher high on its daily chart by rallying above resistance of its June high.

Now, BTC is pulling back to near-term support of its 10-day moving average: 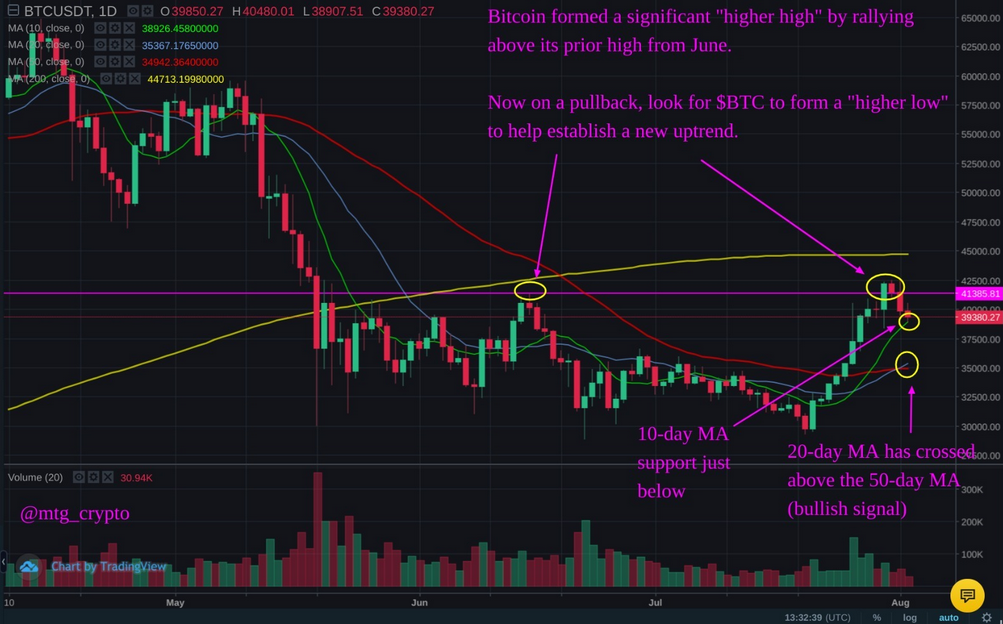 Bitcoin is the king of cryptocurrencies (highest market cap), but it is also important to monitor the price action of Ethereum as a leading indicator of the overall altcoin markets.

After 13 straight days of gains, ETH is now testing a band of resistance created by the prior highs of June.

Ethereum has been showing relative strength to Bitcoin over the past several days, with the Bitcoin Dominance Index turning lower.

Nevertheless, be on the lookout for a potential pullback in ETH, or at least a sideways consolidation, in the short-term: 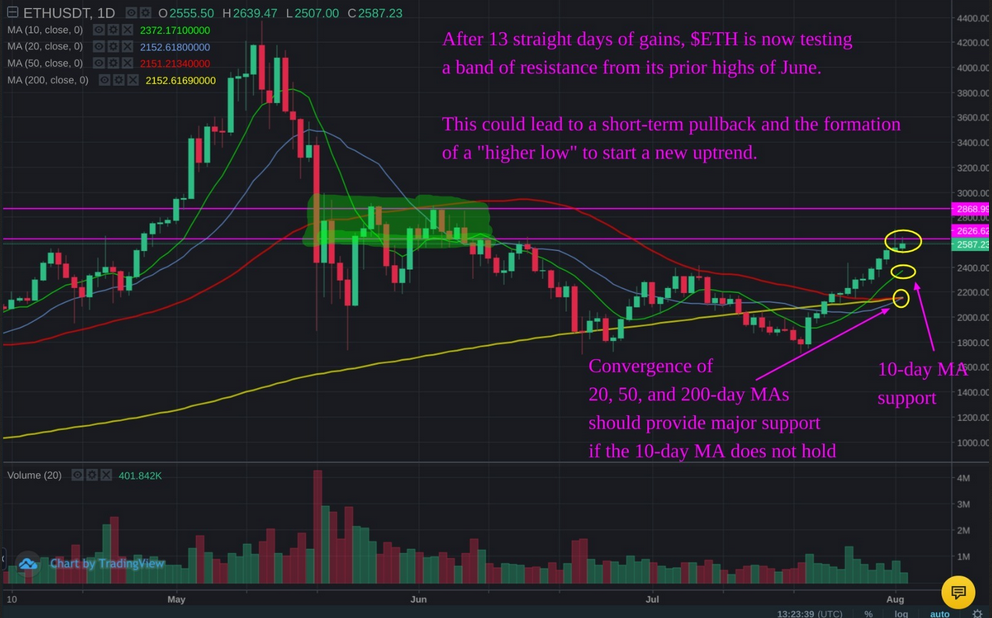 Now that Bitcoin and Ethereum formed higher highs on their daily charts, we expect a set of higher lows to follow.

The formation of higher highs and higher lows is a crucial signal to identify a potential bullish reversal of a prior downtrend.

On the downside, volume during the recent rally was a bit lighter than we like to see with a bullish reversal.

As BTC and ETH pull back on their way to forming higher lows, we will be closely monitoring price action as they approach and test support of their 10-day MAs.

The 50-day moving averages should provide even more significant support below the 10-day MAs.

It’s definitely bullish that both the 10 and 20-day MAs have crossed back above the 50-day MAs.

We bought Quant Network (), a leading altcoin right now, because of the impressive relative strength it was showing to Bitcoin.

At the time of entry, QNT was consolidating near its highs and holding above its 50-day moving average, while BTC was more than 50% off its highs and trading at the lows.

If a crypto asset is so strong that it holds near its highs, even while the overall crypto market (Bitcoin as a benchmark) is not going up, then what happens when the king of crypto eventually rallies as well?

After previously taking profits on partial share size of QNT, we scaled out of the remaining position last week for a gain of +290%—not bad for a holding period of less than two months!

QNT still looks extremely bullish and we are monitoring for a low-risk re-entry point on a pullback.

We informed chatroom participants of a short-term momentum trade in The Graph (), near the $0.607 area, due to its stealth accumulation volume while in consolidation mode. Rallying to more than $0.72 after entry, GRT led to a solid gain of approximately +20% in just two days.