As Global Defense Spending Ramps Up, 2 ETFs To Add Firepower To Any Portfolio


Aerospace and defense (A&D) stocks or exchange-traded funds (ETFs) focusing on that segment typically get significant investor attention. It is a large industry with robust, established companies. Today’s post introduces two funds that may be appropriate for long-term investors interested in A&D.

Global governments are typically the top customers for most of these businesses, especially of defense companies.

According to metrics from Global Firepower, the US currently leads the list of nations in defense spending with an approximate annual budget of $750 billion. Next in lines are China ($237 billion), Saudi Arabia ($67.6 billion), India (61 billion) and the UK ($50.1 billion).

“Global Defense Spending has been on a major upswing over the recent years spurred by the return of the great power competition amongst the leading global powers… The United States continues to maintain the traditional top spot driven by the nation’s significant focus & investments towards R&D while the Chinese ascension & the Russian resurgence, too, are being funded adequately.”

Aerospace can be broken into defense and commercial segments. The pandemic has negatively affected commercial aviation. Since March, air passengers have had to decrease or even fully stop traveling, especially internationally. Manufacturers like Airbus (OTC:) and Boeing (NYSE:) have had to defer new aircraft delivery.

Boeing has also been on a difficult path to winning back passenger trust after the two tragic accidents involving the 737 MAX aircraft. On Nov. 18, the US Federal Aviation Administration (FAA) the plane to enter service again.

In terms of aerospace exports, in 2019, the US held the highest spot with $136 billion, followed by France ($53.5 billion), and Germany ($42.3 billion). Finally, the US, Russia, France, Germany and China have the top spots in weapons exports.

Although aviation has suffered in 2020, PWC suggests, “On the defense side of the industry, the situation appears less dire, with demand protected by budgeted government spending.”

Put another way, A&D is an important industry with big spending and almost-guaranteed customers. As a result, it may deserve a place in long-term portfolios.

The iShares US Aerospace & Defense ETF (NYSE:) provides exposure to US-based manufacturers of commercial and military aircraft as well as other defense equipment. The fund started trading in 2006. 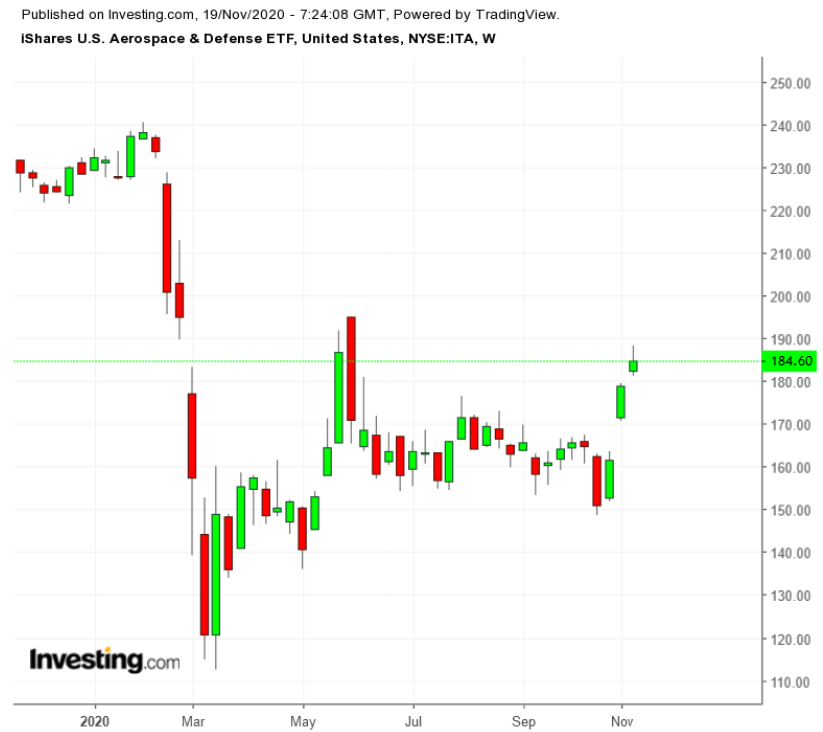 ITA, which has 35 holdings, tracks the Index. Close to 75% of the fund’s holdings are in the top ten stocks. A&D equipment and technology supplier to military, commercial and civil customers Raytheon (NYSE:), which has recently merged with United Technologies, security and aerospace giant Lockheed Martin (NYSE:), Boeing, Teledyne (NYSE:), which provides sophisticated electronic components and communications products, and manufacturer of aircraft components Transdigm Group (NYSE:) are the leading names in the fund.

Since the start of the year, ITA is down 16%. Trailing P/E and P/B ratios stand at 17.86 and 2.97, respectively. A potential decline of 5%-7% in the coming weeks would improve the margin of safety for long-term investors.

Finally, interested investors might like to know that as of the close of business on Dec. 2, 2020, the fund will have a 2-for-1 split. Like other stock splits, this move will lower the share price and increase outstanding shares. However, the total value of shares outstanding will not be affected by the upcoming split.

Market participants who are interested in A&D, but do not want to buy an ETF with full exposure to the industry may also want to research the SPDR S&P Kensho Future Security ETF (NYSE:). In addition to more traditional A&D businesses, the fund provides access to innovative firms that operate in cybersecurity, robotics, drones, space technology, wearables as well as augmented reality (AR). It started trading in late 2017.

The top three names in the fund are Maxar Technologies (NYSE:), which focuses on earth intelligence and space infrastructure, cloud-based cybersecurity provider CrowdStrike (NASDAQ:) and Varonis Systems (NASDAQ:), which provides data security and analytics. Year-to-date, FITE is up over 3%.