After the year we’ve had on Wall Street, some of us might welcome a little dullness.

Maybe that’s starting to emerge as the holidays approach, though virus shutdown fears continue to weigh this morning and could upend things at any time—as we saw with yesterday’s late sell-off.

Aside from that, it does feel like things are winding down. Earnings are mostly behind and were mostly better than expected, the election is over, and there’s been some progress on vaccines. A lot of the recent good news is kind of baked in, with stock indices still near all-time highs, so arguably there’s not a lot of room to the upside.

At the same time, as 2021 approaches with hopes for eventually returning to normal, there’s not lots of selling pressure, either (despite how it might have felt late yesterday). There continues to be a balance between optimism over what the vaccines can ultimately mean and concerns about how quickly they can come to market and get widespread distribution.

This balance could partially explain why the market appears to be levelling out a bit and volatility is approaching its post-COVID-19 lows. The is actually down this morning even though stocks remained under pressure in pre-market trading and bonds ticked up a little.

There’s still some earnings news to wade through before we get to next week’s holiday. Chip-maker NVIDIA (NASDAQ:) reported a nice after the close yesterday. The company beat analysts’ earnings per share and revenue expectations pretty easily, and also delivered above-consensus guidance for the current quarter. Strength showed up across gaming, automotive and data-center segments. Gaming revenue rose 37% and data-center revenue rose 162%.

It’s mind-boggling when you see these numbers, but the company’s shares appear to be falling victim to the same thing we talked about earlier this week when some of the retailers posted great earnings and lost ground in the market. There were amazing expectations, the company met them, and now the stock is down. As The Wall Street Journal noted today in its NVIDIA coverage, sometimes even playing a perfect game isn’t enough.

NVIDIA’s been one of the year’s best performers on Wall Street, in part because of its exposure to gaming, artificial intelligence and electric cars, analysts say. It was up more than 100% year-to-date going into earnings and its forward price-to-earnings ratio is above 50.

Things weren’t as good for Macy’s (NYSE:), which fell 3% in pre-market trading after reporting that same-store sales fell 20% in its . The company did beat analysts’ earnings and revenue projections and saw digital revenue grow nicely, but evidently people are more focused on continued struggles the chain is having getting consumers to come into its stores. It was Macy’s third quarterly loss in a row, and they’re a company that’s really been fighting the fight over the last few years but often ending up on the short end of things.

Today’s big data news also came up a bit short, as new weekly rose to 742,000 from 711,000 the previous week. It was the first weekly increase since early October, and puts new focus on how the virus surge might be hurting the economy. If jobless claims continue to click up over the coming weeks, it could put more pressure on Congress to get some sort of stimulus done ahead of the holidays.

More data are due in a bit with . Wall Street consensus is for a reading of 6.49 million in October, slightly below the previous month, according to research firm Briefing.com. Yesterday saw October slightly beat expectations while came in basically where analysts had expected. These numbers are good barometers of consumer sentiment among the higher-income set.

Strong demand for new homes that has been driven by the pandemic, low mortgage rates, and the tight supply of existing homes for sale, Briefing.com observed. Some of the homebuilder stocks got a lift yesterday, possibly from the data.

Wednesday’s early rally got snuffed out midday after news of New York City’s schools shutting down again due to COVID-19. It goes to show you how virus-related news continues to push the market one way or another more than anything else. Remember that earlier this week positive vaccine developments sent stocks to new record highs, but now major indices are down two days in a row. This shouldn’t be all that surprising considering how far things had come so quickly. Consolidation appears to be underway.

While “value” stocks that cruised along amid vaccine-related optimism continued to hold their own Wednesday, there was also a move back into some of the “momentum” names that tended to do well earlier this year when virus fears arose. These include the “stay-at-home” companies like Peloton (NASDAQ:), Zoom (NASDAQ:), Netflix (NASDAQ:) and DocuSign (NASDAQ:), and this could be a trend worth watching today considering virus worries continue to stalk the market here in the early going. Surprisingly, NFLX was the only FAANG to show some steam, as the rest continued to sputter.

A bit of the FAANG pressure might reflect more congressional hearings on regulatory issues this week that had FAANG executives back in the Washington hot seat. The election doesn’t necessarily change things, because both parties seem eager to find ways to fight what many have said are uncompetitive practices by these firms. Whether Democrats or Republicans ultimately run the next Senate, we can probably expect more of the same for FAANG companies. In fact, it might be one of the few places of bipartisan consensus.

Though the major indices weren’t able to maintain the momentum from last Friday’s and Monday’s amazing rally, there’s still a lot of money on the sidelines parked in money market accounts, analysts said. It’s unclear what it might take for investors to put some of that back to work, though talk of Pfizer (NYSE:) and BioNTech (NASDAQ:) filing for quick approval of their vaccine might motivate some. If they and Moderna (NASDAQ:) file for approval soon, it’s possible a U.S. Food and Drug Administration panel could convene sometime next month to look over the data and decide on a recommendation to the FDA, media reports said Wednesday. Keep an eye on the calendar for any information on when that might occur.

Black Friday Just Over a Week Away

Another calendar date to watch is a week from Friday when “Black Friday” shopping returns. It will be a very different kind of Black Friday this year, with curbside pickup and online sales likely dominating. Also, there are signs holiday shopping began earlier than normal, which could mean less impressive numbers than normal the day after Thanksgiving. Following Black Friday, there’s Cyber Monday.

One thing does seem clear, judging from this week’s round of impressive retail earnings recently shared by companies including Walmart (NYSE:) and Target (NYSE:). They and others have done a really nice job reconfiguring their businesses for this new pandemic reality, with online and drive-up sales helping them book year-over-year gains in their most recent quarters. That should set them up well for any Black Friday and beyond demand that does show up. 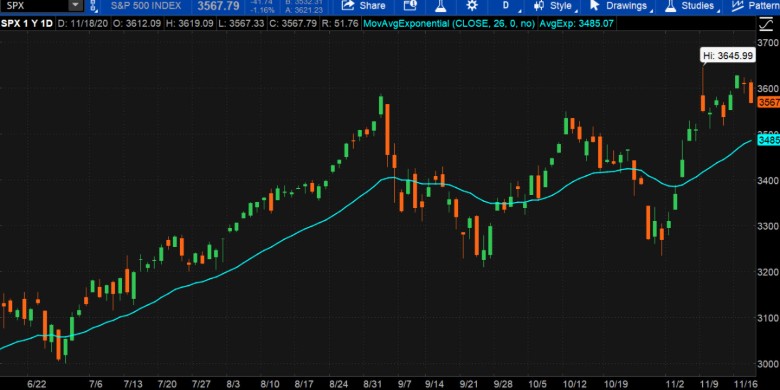 CHART OF THE DAY: UNCHARTED TERRITORY. With the S&P 500 Index (SPX—candlestick) closing at a new high on Monday, there’s no telling where the next resistance might be. A possible support level could be around 3484, which is in line with the 26-period exponential moving average (blue line). Data source: S&P Dow Jones Indices. Chart source: The thinkorswim® platform from TD Ameritrade (NASDAQ:). For illustrative purposes only. Past performance does not guarantee future results.

Vaccine Second Act? The sharp post-election rally was another reminder that a lot of money had been sitting on the sidelines waiting to get into the market. While it’s pretty typical historically to see sideline money jump back in after a presidential election, this time the process got extra help from the vaccine news. There may be more of that coming, by the way. Remember that two other companies—AstraZeneca (NASDAQ:) and Johnson & Johnson (NYSE:)—are also working on COVID-19 vaccines, and several companies have treatments either in development or recently approved. Any positive developments on these fronts could give stocks another tailwind. Earlier safety issues with the AZN and JNJ vaccines have been resolved, the companies said. Also, JNJ’s vaccine has the advantage of being a single dose, vs. two doses for the ones from MRNA and PFE.

Checking Technicals: Maybe you noticed there’s lots of talk about market technicals when things are going badly, but very little when stocks are near or breaking all-time highs. One reason is it’s very hard to map possible resistance points on a chart that’s in untrod territory. It’s like when the first people came to the Americas and didn’t know where the rivers turned rapid or where dangerous predators roamed. They had to find out as they went along. While the next point of resistance for the might not be obvious, there is something to watch if the last two days of weakness start to extend. “The index bias remains bullish with support at 3484, but it is crucial for the bullish case to see a sustained trade over 3588,” research firm CFRA wrote earlier this week. Yesterday’s drop toward the close brought the SPX below that level, and selling then appeared to accelerate. This could put the SPX in a negative technical light to start Thursday.

Meanwhile, CFRA said, “The has shown divergent weakness compared with the other indices and must maintain above 11,633 to sustain a near-term bullish bias. Any breach of support at 11,633, and especially 11,495, would negate the bullish bias. Higher resistance remains at 12,439.”

Giving Thanks: As next week’s holiday and Black Friday approach, let’s remember to give a call-out to the many employees of retail and other companies who continue to show up to work despite this massive new wave of the virus. We shouldn’t forget that many workers—including in hospitals, doctor’s offices, grocery stores, retail stores, some schools, warehouses, delivery services, and emergency response—have no way to work at home, but continue to take risks to help the rest of us. That’s definitely something to be thankful for next week, and these people deserve our continued support and gratitude.