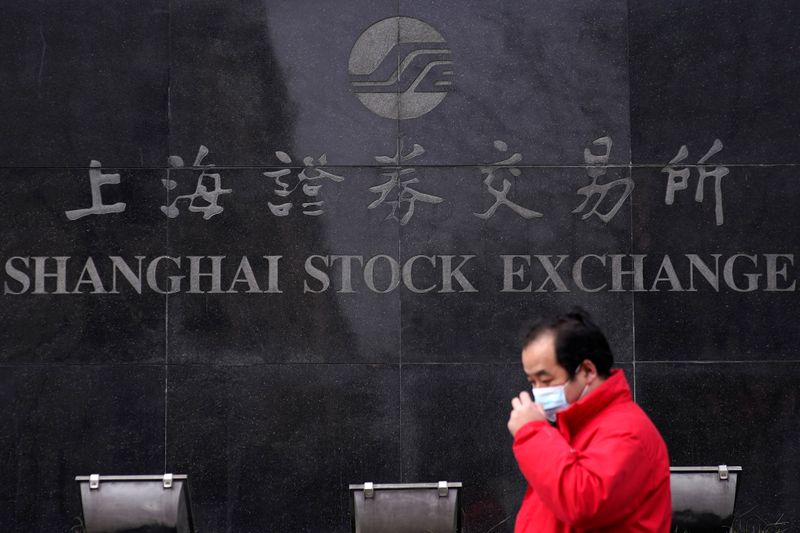 © Reuters. A men wearing a mask walk at the Shanghai Stock Exchange building at the Pudong financial district in Shanghai

European stock futures eked out gains of 0.30% before the start of cash equity trading.

MSCI’s broadest gauge of the world’s shares covering 49 markets added 0.15%, bringing gains so far this month to 12.8%, on course for a record monthly increase.

“It’s true that stock prices are quite expensive but markets are finding fewer and fewer reasons to sell them. In this environment, you can’t make profits by selling. The only question to ask is what assets you should buy.”

Traders attributed the brief softness in S&P 500 and the Dow Jones to weak U.S. economic data.

Figures from the U.S. Labor Department’s weekly jobless claims suggested that an explosion in new COVID-19 infections and business restrictions were boosting layoffs and undermining a recovery.

But with more than 20 million people on jobless benefits, investors bet the Federal Reserve will have no choice but to keep its ultra-easy policy to support the pandemic-stricken economy.

Minutes from the Fed’s last policy meeting showed policymakers consider giving markets a better steer on how long they will continue to buy bonds to support an economy under siege from new coronavirus infections.

“It’s somewhat out of character that they mention taking this step ‘fairly soon’ when they haven’t begun a discussion of this with the public,” wrote Michael Feroli, chief U.S. economist at J.P. Morgan in New York.

The Fed could extend the maturity of its Treasury purchases if its board members judge that deterioration in the pandemic warrants more policy accommodation, he added.

In commodities, oil prices rose for a fifth day as a surprise drop in inventories added to the positive mood stemming from hopes of demand recovery. [O/R]

In the currency market, the U.S. dollar stayed under pressure as riskier currencies benefited from the increased optimism.

The dollar’s index against a basket of major currencies dipped 0.07% to 91.919, hitting its lowest levels in almost three months.

Trade was slow as U.S. financial markets will be closed on Thursday for the Thanksgiving holiday. U.S. bonds and stocks will trade on a partial schedule on Friday.

fell 4% to $17,909, pulling off from a near-three-year high touched the previous day. Still, the crypto-currency sits on gains of about 30% so far this month.