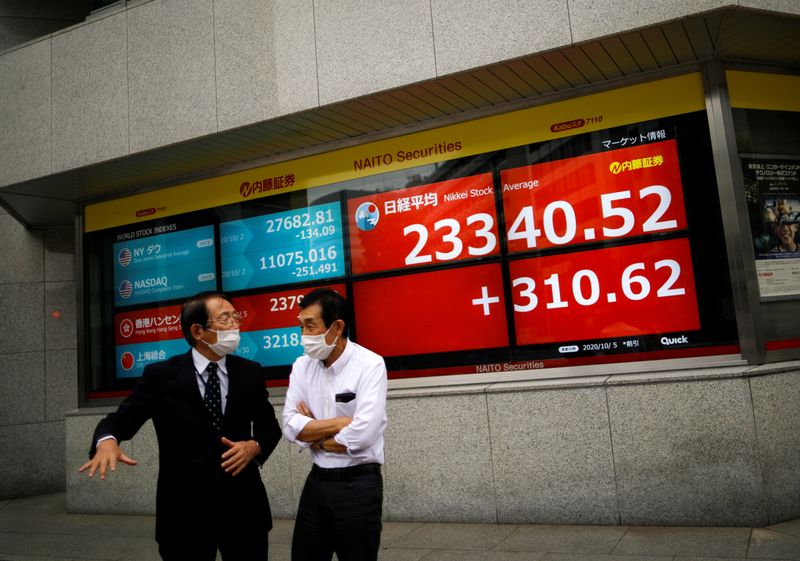 SYDNEY (Reuters) – Asian shares bounced off one-month lows on Monday on solid data from China showing factory activity expanded at its fastest pace in a decade while oil prices skidded as many Western countries slid back into coronavirus-driven lockdowns.

MSCI’s broadest index of Asia-Pacific shares outside Japan () climbed 0.5% to 573.04, as China’s Caixin/Markit Manufacturing Purchasing Managers’ Index offered hope the region’s success in containing the coronavirus could spare it the economic pain being inflicted on Europe and the United States.

All major indexes except New Zealand were up on Monday.

Chinese shares were higher with the blue-chip CSI300 () rising 0.8% with the country’s vast industrial sector steadily returning to levels seen before the COVID-19 pandemic paralysed huge swathes of the economy.

E-Mini futures for the S&P 500 () added 0.1%, with investor focus turning to the U.S. Presidential elections on Tuesday.

The global outlook is dimming as many Western countries battle still rising COVID-19 infections and go back into virus lockdowns.

Global coronavirus cases surpassed 500,000 last week with Europe crossing the bleak milestone of 10 million total infections. The United Kingdom is grappling with more than 20,000 new cases a day while a record surge of U.S. cases is killing up to 1,000 people a day.

Fresh coronavirus-induced lockdowns have raised concerns over the outlook for fuel consumption, sending Brent crude () to a low of $35.74 per barrel, a level not seen since late May. went as low as $33.64. [O/R]

“Markets are looking ahead of Q4 and early 2021 where the growth outlook looks clouded given the move to stricter lockdowns in Europe,” Perpetual analysts wrote in a note.

They said a -1% hit to European growth would send global gross domestic product down by 0.5% over the subsequent 12 months.

“The key question here is how long are the lockdowns needed to get the virus under control.”

Ahead of the last campaign weekend, Republican President Donald Trump trails Democratic challenger Joe Biden in national opinion polls partly because of widespread disapproval of Trump’s handling of the coronavirus.

Opinion polls in the most competitive states that will decide the election have shown a closer race, still favouring Biden.

In currencies, the risk-sensitive Australian dollar

That left the , which measures the greenback against a basket of peers, flat at 94.07. ()

A risk-on revival after the U.S. election could however see the dollar resume its slide from the March highs, analysts said.

JPMorgan (NYSE:) analysts said the market likely views a Biden win as “short-term neutral” but “long-term negative” as his expected tax policy outweighs the benefits from a large stimulus package.

“SPX may have upside to ~3400, but it would have larger downside depending on the details of the package, potentially to ~2,500,” they added.