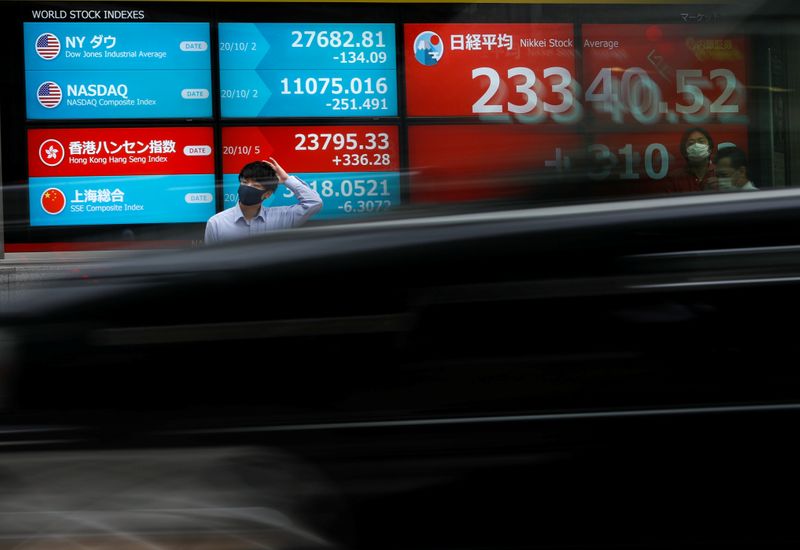 © Reuters. A passersby wearing a protective face mask stands in front of a screen displaying Nikkei share average and world stock indexes, amid the coronavirus disease (COVID-19) outbreak, in Tokyo

By Scott Murdoch and Lawrence Delevingne

The vaccine news sparked renewed optimism in equities around the world but oil prices slipped in Asian trade after posting the biggest one-day percentage gain in five months.

However, some analysts sounded caution over the speed in which the vaccine could be implemented.

“Given more tests are needed, then the approval process. Manufacturing and distribution would mean the vaccine, if truly effective, is still months away from mass deployment,” said Tai Hui, chief Asia market strategist at JPMorgan (NYSE:) Asset Management.

Hong Kong’s futures was up 1% in early trade but there was marginal weakness in China as the CSI300 Index slipped by 0.24%. MSCI’s broadest index of Asia-Pacific shares outside Japan was 0.12% higher.

Airline, travel and tourism stocks across Asia were beneficiaries of the optimism prompted by the vaccine announcement.

“Markets will get ahead of themselves in the short term with the vaccine news but longer term it feels like it is going higher,” Ord Minnett advisor John Milroy said from Sydney.

The stronger performance on Asian markets followed the positive lead overnight from the United States and Europe.

While stocks have also rallied on the assumption that Democrat Joe Biden would be the next U.S. President, the top Republican in U.S. Congress on Monday did not acknowledge Biden as president-elect, raising concerns about a rough transition of power.

Senator Mitch McConnell said in a speech that President Donald Trump was well within his rights to look into charges of election “irregularities” but did not offer any evidence of fraud.

Bonds had their biggest selloff since recoiling from March peaks. The yield on benchmark 10-year U.S. government debt, which rises when prices fall, jumped 10.3 basis points on Monday and held above 0.9% on Tuesday at 0.9099%

However, in Asian trade some of the momentum fell away.