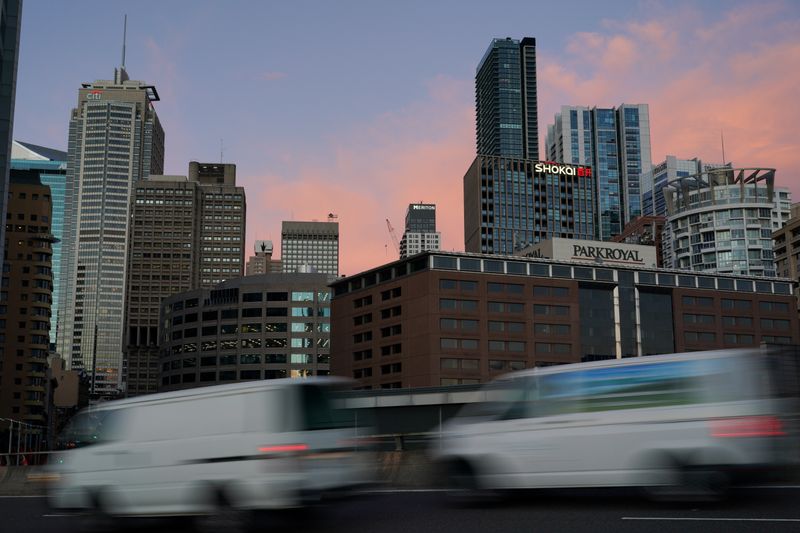 SYDNEY (Reuters) – Australian businesses conditions moderated for a third straight month in December, while price pressures started to ease off, pointing to a likely peak in inflation.

Tuesday’s survey from National Australia Bank (OTC:) Ltd (NAB) showed its index of business conditions had fallen 8 points to +12 in December, although it remained still well above its long-run average.

The measure of confidence, on the other hand, improved 3 points to -1, remaining in negative territory for a second straight month.

“Overall, the survey continues to point to a healthy level of activity with above average conditions and elevated capacity utilisation but a slowing in momentum with most indicators pulling back over the past three months or so,” NAB said in a statement.

“With confidence still in negative territory and well below average, and forward orders moderating further in the month, there are signs that conditions may ease further.”

An encouraging sign from the survey is that inflation is easing across the board. The RBA’s board will consider whether to raise its policy interest rate for a ninth time when it meets next Tuesday.

So far, markets are still inclined to think the central bank will raise its 3.1% cash rate by another quarter point, but they have also priced in a 40% chance it will pause, given that interest rates have climbed by 300 basis points since May.

A consumer inflation report due on Wednesday is expected to be critical in determining the near-term outlook for interest rates.

Economists polled by Reuters expect the report to show that October-December quarter consumer prices were 7.5% higher than a year earlier, compared with the 7.3% annual rise seen in the previous quarter. That will still be below the forecast from the RBA for a peak inflation rate of around 8%.

Other signs of a slowdown in business conditions include NAB’s measure of sales, which slipped 9 points to a however still strong reading of +18 and above pre-pandemic levels.

Capacity utilisation also eased off from record high levels to 83.7%.

Profitability edged 7 points lower to +12, while the employment index also dipped 5 points to +8, still high from a historical perspective.