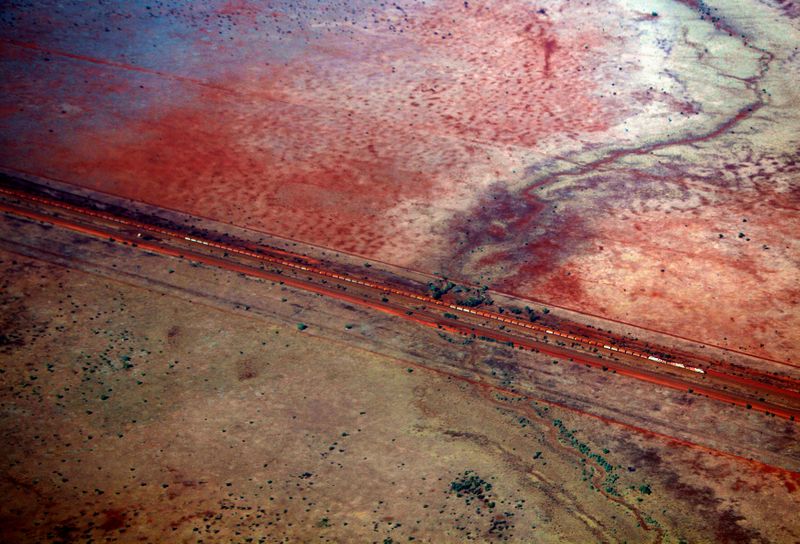 © Reuters. FILE PHOTO: A train loaded with iron ore can be seen near the Fortescue Solomon iron ore mine located in the Valley of the Kings, south of Port Hedland, in the Pilbara region of Western Australia December 2, 2013. REUTERS/David Gray/File Photo

MELBOURNE (Reuters) -Rio Tinto reported a 12% fall in quarterly iron ore shipments on Friday after storms affected its West Australian operations, but is expected to report bumper results this month on soaring prices for the steel raw material.

Rio said it now expects to ship near the lower end of its range of 325 million tonnes (mt) and 340 mt in calendar 2021, meaning it may hand back its crown as the world’s biggest producer to Brazilian rival Vale S.A..

Vale, which reports output later this month, is on track to meet the upper end of its 2021 guidance of 315-335 mt, according to UBS.

Rio shipped 76.3 million tonnes (mt) of the steel-making commodity for the three months ended June 30, down from 86.7 mt a year ago, just ahead of a UBS estimate of 76 mt.

“We would have liked to have seen higher production to capitalise on these iron ore prices. Still, they are going to be swimming in cash at results time,” said analyst David Lennox at Fat Prophets in Sydney.

“Hopefully we will get a good dividend and we are looking for a share buyback as well.”

Iron ore prices surged to records above $230 a tonne in May thanks to a post-COVID infrastructure drive by China.

Rio is expected to post half-year underlying earnings of $10.9 billion on July 28 according to a Vuma consensus of 14 analysts, more than double the $4.75 billion it reported for the same period last year.

Rio also said it delayed commissioning at its new Gudai-Darri iron ore hub to later this year and first production from its Winu find in Australia to 2025 from original estimates of 2023, partly due to COVID restrictions.

It lowered 2021 production by 2 Mt due to new strategies to protect Aboriginal areas of high cultural significance as it seeks to repair relations with Aboriginal groups following its destruction of rock shelters at Juukan Gorge last year. Has SPRT’s Short-Squeeze Play Run Out of Steam? By TipRanks Naturgy’s main shareholders not selling, although IFM bid is “reasonable” board says By Reuters Merkel to hang on as active caretaker By Reuters

Law does not permit any relief to Mistrys once their case...

Merkel to hang on as active caretaker By Reuters