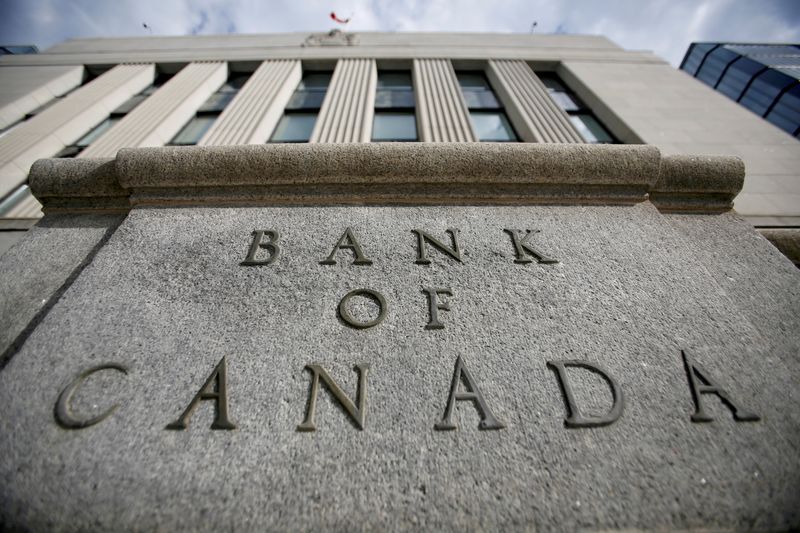 © Reuters. FILE PHOTO: A sign is pictured outside the Bank of Canada building in Ottawa, Ontario, Canada, May 23, 2017. REUTERS/Chris Wattie

By Steve Scherer and Julie Gordon

OTTAWA (Reuters) – The Bank of Canada is right to warn that inflation will persist well into next year and to signal that interest rates are likely to start moving higher sooner than previously thought, former Canadian central banker David Dodge said on Thursday.

The central bank held https://www.reuters.com/world/americas/bank-canada-signals-it-could-hike-rates-sooner-than-expected-2021-10-27 its key overnight interest rate at 0.25% on Wednesday, but nudged forward its guidance on a hike to as soon as April 2022. It said it now sees inflation remaining above its 1%-3% control range for much of 2022. Inflation was 4.4% in September.

The last time Canadian inflation https://www.reuters.com/article/canada-economy-inflation-idCAKBN2HA1GX was at this level was in February 2003, when Dodge was the central bank’s governor. He hiked the key rate three times through 2002, pushing it to 2.75%, and raised it to 3.0% in March 2003 and 3.25% in April.

Now Tiff Macklem is governor, and the key rate has been at 0.25% since the onset of the coronavirus pandemic in March of last year. The last time the central bank raised rates was October 2018, when Stephen Poloz was governor.

The shock from the pandemic means that “the circumstances are very different” in 2021 than they were 18 years ago, Dodge said in a telephone interview.

That shift is “more or less right, finally,” Dodge said. Before Wednesday, many economists had said that inflation was going to be more persistent than the central bank had forecast.

“What the bank is saying, and quite rightly, is that the upward movement in inflation over the period that we are in … turned out to be a bit bigger than they had expected. So that’s not totally surprising, and forecasts are forecasts, right?” he said.

“But what they’re also saying is that they think it’s going to go on now a bit longer than they had anticipated, which I think is right, and they are reacting to that,” he added.

Dodge said rates would start rising again next year, and that the central bank’s message was that it would focus on the underlying economic data while setting policy, which he said was “exactly right.”