Bank of England likely to help economy after no-deal Brexit: Carney By Reuters 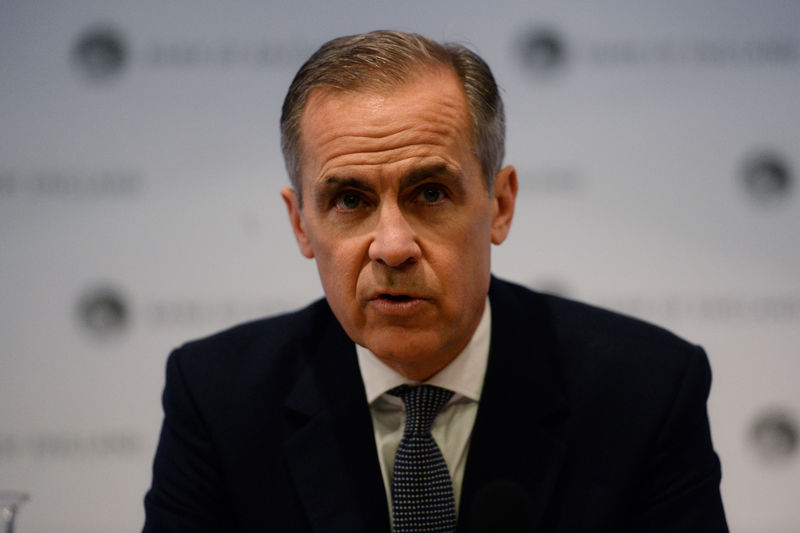 By William Schomberg and David Milliken

LONDON (Reuters) – Bank of England Governor Mark Carney said on Tuesday the BoE would probably give more support to the economy if it suffers the shock of a no-deal Brexit, but that the options available to the British central bank would be limited.

The BoE has previously stressed that it would not have an automatic interest rate response to Britain leaving the European Union without a transition deal, which is due to happen in just over a month’s time.

But Carney said the chances of the BoE loosening or tightening monetary policy were not equal.

“Given the exceptional circumstance associated with Brexit, I would expect the committee to provide whatever monetary support it can,” he said in an annual report to lawmakers.

“But there are clearly limits to its ability to do so.”

The BoE has raised rates only twice since the global financial crisis, due to a slow recovery and more recent Brexit uncertainty hanging over the economy, and its benchmark lending rate stands at 0.75 percent, close to the historic low of 0.25 percent.

Prime Minister Theresa May is still trying to find a deal with the EU that can bridge the divide within her Conservative Party, little more than a month before the scheduled Brexit date of March 29.

Media reports on Tuesday said May was poised to rule out a no-deal Brexit and delay Britain’s departure from the EU, sending sterling to it strongest since May 2017 against the euro and topping $1.32 versus the U.S. dollar.

The BoE said on Tuesday it would increase the frequency of its liquidity operations to weekly from monthly in the weeks around March 29, as it did at the time of the 2016 Brexit referendum in order to keep the financial system working.

“This is a prudent and precautionary step,” the BoE said.

In 2016, after British voters opted to leave the EU, the BoE cut rates and ramped up its bond-buying stimulus program to help the economy weather the shock.

Policymakers have said that after a no-deal Brexit they might need to raise rates because the likely sharp fall in the value of the pound, new tariffs, disruption to trade and less investment by companies would stoke inflation pressures.

Carney acknowledged in his report on Tuesday that the BoE’s tolerance of a sustained overshoot of its 2 percent inflation target could be breached and some tightening might be required.

Earlier this month, Gertjan Vlieghe, one of nine Monetary Policy Committee members, broke ranks and said he thought the BoE would need to keep rates on hold or cut them in the event of a no-deal Brexit.

But two other MPC members, speaking alongside Carney to parliament’s Treasury Committee on Tuesday, sounded a note of caution about the risks from inflation after a no-deal Brexit.

Deputy Governor Dave Ramsden said there was little precedent of a similar shock and that inflation expectations in Britain had risen, unlike in the United States and the euro area.

MPC member Jonathan Haskel said he was hesitant that the BoE would be able to make good predictions about inflation.

Carney himself acknowledged that a no-deal Brexit would be inflationary due to new tariffs and trade disruption, and that this would limit the BoE’s ability to soften the economic blow.