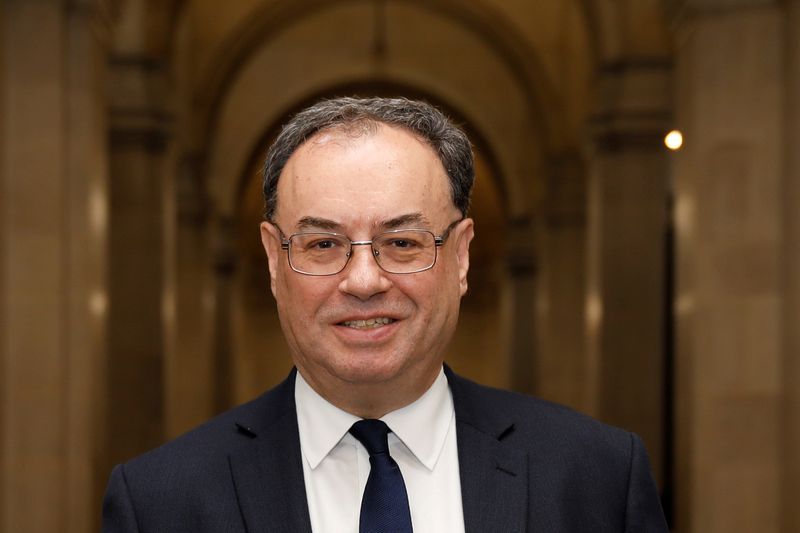 © Reuters. FILE PHOTO: Bank of England Governor Andrew Bailey poses for a photograph on the first day of his new role at the Central Bank in London

LONDON (Reuters) – Britain’s darkening economic outlook looks set to push the Bank of England into ramping up its huge bond-buying stimulus programme next week for the third time since the onset of the coronavirus pandemic.

The central bank is expected to increase the size of its asset purchase programme by a further 100 billion pounds on Nov. 5, according to a Reuters poll of economists.

That would take it to 845 billion pounds ($1.10 trillion), almost double the level before the pandemic, making the BoE’s response to the coronavirus crisis one of the most aggressive among the world’s central banks.

But Governor Andrew Bailey and his colleagues are unlikely to take a big step closer to cutting interest rates below zero for the first time, something investors do not see as a possibility until well into 2021.

Britain’s economy has been propped up by BoE bond-buying alongside a surge in government spending that will explode the budget deficit to around 20% of gross domestic product in 2020.

However, the country still faces the sharpest peak-to-trough contraction of any Group of 20 economy, Moody’s (NYSE:) said on Oct. 16 when it cut Britain’s credit rating.

It pointed to the severity of the COVID-19 outbreak in Britain, how hard its huge services sector has been hit by social-distancing, and to new outbreaks which are leading to fresh restrictions on business.

On top of that Britain also risks a severe trade shock when its post-Brexit transition period ends on Dec. 31.

Even if a trade deal with the European Union is done in time, it is likely to erect new barriers to trade with Britain’s closest partners.

“We’re operating at an unprecedented level of economic uncertainty,” Bailey said on Oct. 18. “The risks remain very heavily skewed towards the downside.”

In August, the BoE said Britain’s economic output was likely to regain its pre-pandemic size in the second half of 2021.

But that is likely to be pushed back by two years when the central bank updates its forecasts, economists at HSBC said.

HSBC said it expected all nine BoE rate-setters to vote for a 100 billion-pound increase, including Chief Economist Andy Haldane who had sounded upbeat about the outlook until recently.

That would probably give the central bank enough firepower to keep on buying British government bonds until next June, when it might have a clearer view on whether it is prepared to cut rates below zero for the first time.

Officials have stressed that they are not close to that kind of decision yet.[L4N2HH38P]

Bailey has said negative rates have worked best in other countries when the economy is in a sustained recovery, not the kind of slowdown Britain is facing now.

The BoE has asked commercial banks to provide feedback by Nov. 12, a week after next week’s statement.

Money markets have priced in a greater than 25% chance that the BoE will cut rates by 25 basis points to -0.15% by May, according to data from Refinitiv, rising to almost 50% by the end of 2021. Only a small minority of economists polled by Reuters expect negative rates next year.