Investors are understandably jumpy amid the current uncertainty about virtually everything. So a short paragraph in the from the Bank of England’s last week blindsided markets.

The UK central bank raised the possibility of negative interest rates after officials had pooh-poohed the idea for months.

“…had been briefed on the Bank of England’s plans to explore how a negative bank rate could be implemented effectively, should the outlook for inflation and output warrant it.”

As the UK prepares to re-imposes some restrictions against COVID-19 and debates a return to lockdown, it sure looks like circumstances could warrant negative rates if the bank wants to ease monetary policy further from its current 0.1% benchmark rate.

took a dive on the comments and yields on UK government bonds declined as gilts staged a rally (bond yields move inversely to prices). 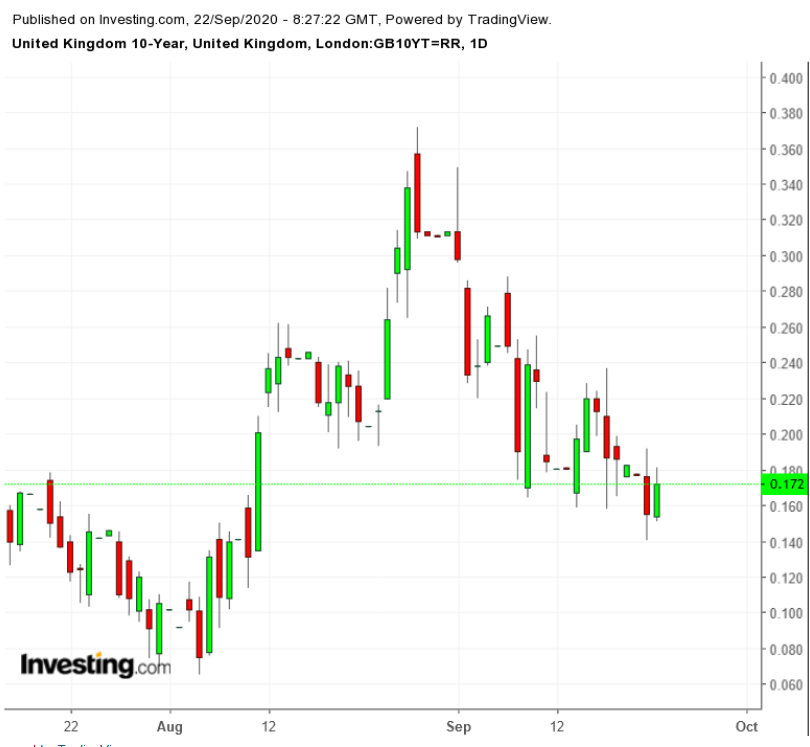 The bond yield slipped 2 basis points by Monday as market participants waited for a scheduled speech by Bank of England governor Andrew Bailey to see if he would clarify the bank’s view on negative rates.

The rally in gilts supported the prices of eurozone government bonds as well. The Italian bond yield, which had been coasting below 1% since the Fed’s announcement, dropped even further, touching near 0.9% on Monday before bouncing back a couple of basis points.

Exit polls indicated that Italy’s center-left alliance had maintained the hold on its fiefdom in Tuscany, as opinion polls ahead of the regional vote Sunday and Monday made the election too close to call. The loss of the heartland region could have destabilized the coalition government of the Democratic Party and Five Star Movement in Rome.

The surprise from the Bank of England Thursday came after the US Federal Reserve delivered on its Wednesday to keep rates low, extending its time horizon to 2023 with a forecast that the benchmark rate would remain at near zero until the end of that year.

Treasury yields bounced around as investors digested that prospect, trying to balance a carte blanche to seek out riskier securities with the inherently pessimistic view behind that forecast. 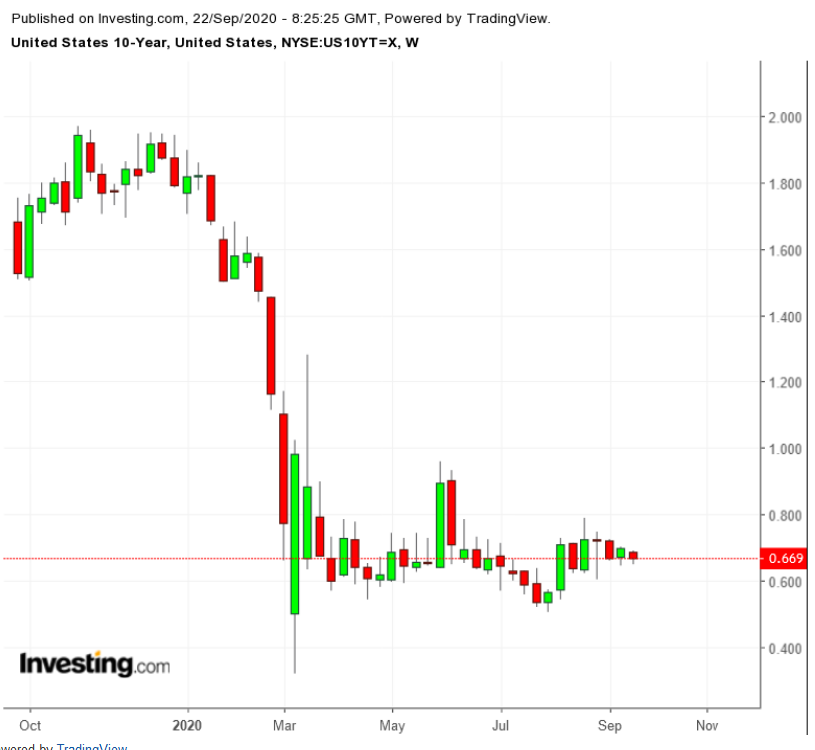 By Monday, worries about the pandemic seemed to predominate, and the Treasury note declined 3 bps to 0.66% as the possibility of a renewed lockdown in London prompted investors to opt for a safe haven, exiting from and moving into Treasuries.

The in the US Congress over a further fiscal stimulus has been overtaken by the debate over a Supreme Court appointment after Justice Ruth Bader Ginsburg died on Friday after a long battle with cancer.

Fed Chair Jerome Powell had to the equation in his prepared remarks for Tuesday before the House Financial Services Committee to testify about the Fed’s response to the pandemic.

However, timing is everything and his reiteration of the belief that “a full recovery is likely to come only when people are confident that it is safe to reengage in a broad range of activities” reminds us that moment, clearly, has not yet come.

Facebook
Twitter
Pinterest
WhatsApp
Previous articleChart Of The Day: After A 34% Drop, Tesla Is Heading For A Rebound
Next article10-Year Note Speculators Edged Bullish Bets Higher For 2nd Week