Barriers to China-U.S. investments could outlast Trump By Reuters 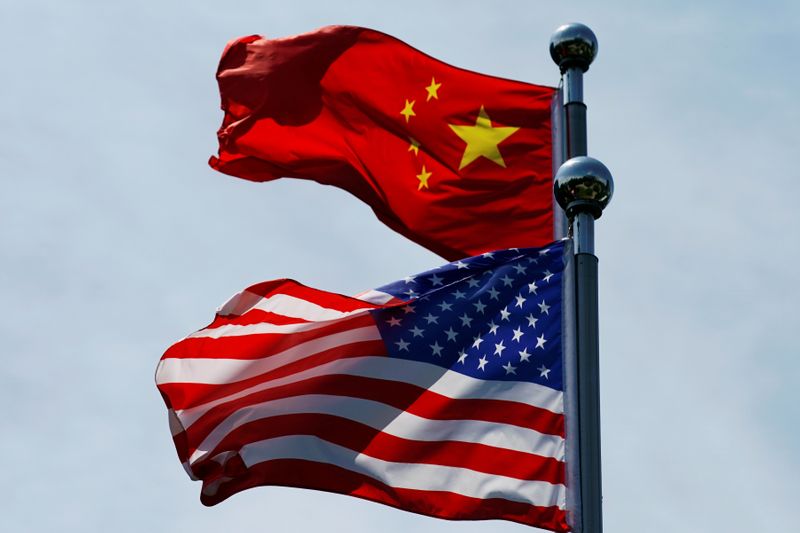 © Reuters. Chinese and U.S. flags flutter near The Bund in Shanghai

By Kane Wu and Echo Wang

HONG KONG/NEW YORK (Reuters) – President Donald Trump raised barriers for Chinese companies seeking to invest or raise money in the United States that will have a lasting impact even if he does not win a second term, according to dealmakers and policy experts.

Chinese acquisitions of U.S. companies dropped to $1.86 billion last year, a tiny fraction of the $61 billion they totaled in 2016, when they were at their peak right before Trump came into office, according to Refinitiv data.

Chinese venture capital investments into the United States, which peaked in 2016 at nearly $15.7 billion, totaled just $6.7 billion as of Oct. 27, according to PitchBook data.

Foreign direct investment from China into the United States has declined by 90% to $4.7 billion so far this year compared to 2016, according to the Rhodium Group.

Much of this is the result of Trump’s policies. The United States blocked many Chinese acquisitions, especially of U.S. technology firms, on national security grounds, and even ordered some Chinese firms such as the owners of social media apps TikTok and Grindr to divest them. U.S. stock exchanges raised their listing standards after many investors got burnt in auditing scandals involving Chinese firms, including coffee chain operator Luckin Coffee (OTC:). And Chinese nationals found it harder to secure U.S. work permits.

This trend could continue, even if China-U.S. tensions over hot-button issues such as trade and the future of Hong Kong eased, dealmakers say. This is because concerns about corporate China abusing its technologic prowess and misleading investors are shared by both Republican and Democratic U.S. lawmakers.

“The United States no longer views China as a partner, but an enemy and a threat… America has become very unfriendly soil to anything Chinese,” said Fred Hu, chairman of Chinese private equity firm Primavera Capital Group, which has investments in U.S. companies. He added that U.S.-China relations were unlikely to improve in the short term.

Under Trump, the Committee on Foreign Investment in the United States (CFIUS), which scrutinizes deals for potential national security risks, toughened its stance on Chinese companies.

CFIUS reviews are confidential, and the secretive government panel does not disclose how many deals it blocks each year. But in its annual reports to the U.S. Congress, CFIUS has revealed its heightened scrutiny of Chinese deals; it reviewed 140 deal applications by Chinese acquirers in the first three years of the Trump administration, more than those from any other country, compared to 20 such applications in the first three years of Barack Obama’s administration. This is despite Chinese applications with CFIUS for U.S. deals declining from 60 in 2017 to 25 in 2019.

The U.S. crackdown spilled over into venture capital investments. Many Chinese venture funds and some state-backed ones, who flooded into Silicon Valley several years ago in the search for reasonably valued unicorns, left the U.S. in the last couple years, as CFIUS also scrutinized sizeable minority stake investments. Some Chinese investors into U.S. venture capital firms also retreated.

“Now we have zero Chinese investors in our fund,” said Edith Yeung, general partner of Silicon Valley-based venture capital fund RaceCapital. She said she had to reject many Chinese investors from her fund due to the regulatory risk.

Trump said this year he was also looking “very strongly” at the possibility of delisting Chinese companies that do not comply with U.S. accounting standards from U.S. exchanges, but did not follow through on that threat.

While the total value of Chinese companies listing in New York has reached $2.5 trillion so far this year – almost double the total four years ago before Trump came into office – Nasdaq has updated its rules to make it more difficult for small Chinese firms to float on their exchanges.

As a result, only five Chinese IPOs under $25 million landed in New York this year, compared to nine last year.

Policy experts said deep U.S. suspicion of China’s economic power, technological advances and accounting standards will likely result in many of the hurdles to cross-border investments remaining in place even if Trump’s Democratic challenger Joe Biden succeeds him in January.

“Our take is that the U.S. containment on China is bipartisan,” Natixis economists wrote in a note last week.