Biden farms for crucial votes in Trump Country By Reuters 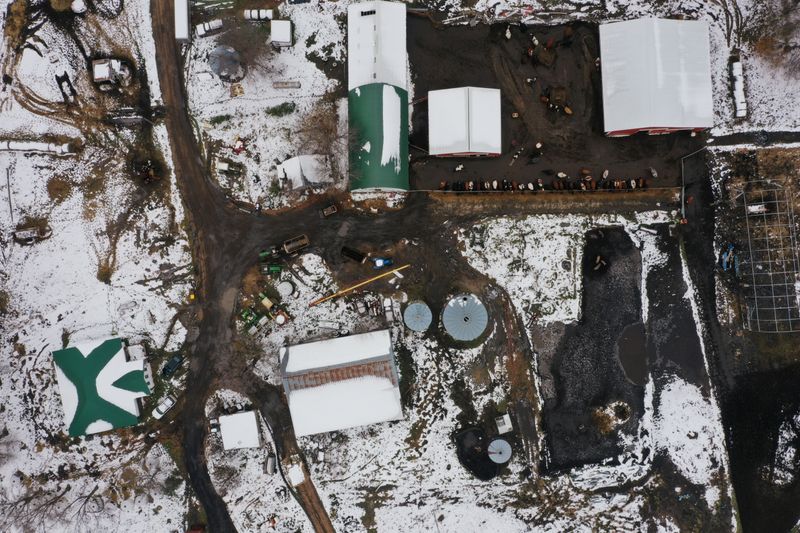 By P.J. Huffstutter and Tom Polansek

(Reuters) – By planting a sign in early October supporting Joe Biden on a country road near her Minnesota dairy farm, Meg Stuedemann initially stood out from her neighbors.

The 54-year-old, who runs Derrydale Farm in Belle Plaine with her husband, supports the former vice president, a Democrat, for president because of his pledges to combat climate change and promote renewable energy.

“Out here, you feel like you’re alone in supporting Biden,” said Stuedemann, who doesn’t recall seeing a single sign for Democratic candidate Hillary Clinton four years ago. “But then you look around and begin to realize, you’re not. Each sign you see, you sit up a little straighter and think, ‘Maybe things are going to change.'”

Biden’s campaign is making inroads in rural America, striving to peel off voters in conservative communities that went heavily for Trump in 2016 over Clinton. That’s one reason the former vice president is stumping in Iowa and Wisconsin on Friday, and in Pennsylvania and Georgia in the precious last days of the race.

Although Biden is unlikely to capture majorities of rural voters, who surveys show strongly favor Trump, his campaign sees cutting into the president’s margins as essential in battleground states where the candidates are polling even or are separated by single digits.

“You cannot win the presidential race if you ignore rural voters,” Tom Vilsack, a former Iowa governor and U.S. agriculture secretary who is campaigning for Biden, told Reuters.

Trump’s campaign is seeking to energize these and other voters in his base, touching down this week in Wisconsin and Pennsylvania, where he narrowly won in 2016, and visiting Iowa earlier in the month.

“We’ve had a permanent presence in key states around the country for years that has allowed us and the president to connect with rural voters on a personal level about the issues that matter,” Samantha Zager, deputy national press secretary for the Trump campaign, said in a statement.

“As a result, the Trump campaign is confident that we’ll win with rural Americans, and we’re not ceding any ground because we know Biden’s failed record on trade and his plans to destroy rural access to health care would disproportionately hurt these hardworking families.”

Polls point to some openings for Democrats. A recent Reuters/Ipsos poll, for instance, reveals that the number of rural Americans who believe the country is headed in the “right direction” dropped from 41% in March to less than a third in mid-October.

In 2016, Clinton’s campaign largely surrendered farm-state voters to Republicans, helping to fuel Trump’s White House win, as well as sweeps of the House and Senate. Biden’s team is determined not to make the same mistake.

In Iowa and Wisconsin – where Trump beat Clinton in 2016 by nearly 10 percentage points and less than 1 point, respectively – Biden’s campaign has touted his support for corn-based biofuels for weeks on rural radio and local television stations. [L1N29B1Q9]

Biofuel plants are an important source of demand for farmers’ corn, used to make ethanol. Trump’s Environmental Protection Agency has angered growers by exempting oil refiners from requirements to add ethanol to their gasoline.

When the cash-strapped Trump campaign canceled millions of dollars in TV advertisements in Iowa last month, the Biden campaign snapped up those spots, according to Biden’s advisers. Among their goals: to reach farmers spending long days inside their combines as they harvest their corn and soybeans.

And as former President Barack Obama’s campaign did in 2008, the Biden campaign set up rural councils in six battleground states, dedicating staff to work on rural messaging and voter outreach. By reviving the councils abandoned by the Clinton campaign, Democrats hope to be competitive in legislative and local races as well as the presidential contest.

CRACKS IN THE FORTRESS

Rural America remains Trump country. Nationally, voters who identify as living in rural areas support Trump over Biden by 19 percentage points, up from a 14-point advantage in March, according to Reuters/Ipsos polls.

Perhaps bolstering that lead was China’s move, following an interim trade deal with Washington in January, to increase soy and corn purchases this summer and fall. Commodity prices rose to multi-year highs and brought some financial relief to the Midwest.

That was reassuring news to some rural Republicans, who had been rankled by Trump’s trade war with China, which cost U.S. grain farmers billions of dollars in lost sales. Other farmers have never wavered in their support for their president’s policies, including the trade war, touting their views in coffee shops, on Twitter and with flags on their trucks and tractors.

“China was taking advantage of us forever,” said Gary Vetter,60, who raises cattle and grows corn, soybeans and alfalfa in Westside, Iowa. “At least (Trump) is active and trying to do something.”

But there are cracks in Trump’s rural fortress, especially in areas hit hard by the coronavirus.

In Wisconsin, for instance, where hundreds of people have been recently hospitalized, Trump’s lead among rural voters shrank to 2 points in polls conducted Oct. 20-26, from nine points a month earlier, according to the Reuters/Ipsos polls.

In agrarian Winneshiek County, Iowa, where Trump beat Clinton by just 90 votes in 2016, Democrats have become the largest bloc of active registered voters for the first time since at least 2000, said Nathan Thompson, chairman of the Winneshiek County Democrats. Ahead of the 2016 election, Republicans and voters with no affiliation each outnumbered Democrats.

Voters are focused on healthcare and the pandemic, Thompson said.

In a bad sign for the Trump campaign, rural voters appear less inspired to cast ballots this year: According to the Oct. 14-20 Reuters/Ipsos data, 60% of them say they are “certain” to vote, down six points from a similar poll in late September and early October.

Republican leaders and many Democrats had assumed Iowa would be an easy win for Trump. But a recent poll by Quinnipiac University shows Trump and Biden running nearly even, with 47% and 46% of the vote respectively.

Particularly in this top corn-growing state, farmers have fumed as the Trump administration repeatedly granted oil refiners waivers from mandates requiring them to use biofuels, saying that lowers demand and prices for their crops.

In September, Republicans said the Trump administration supported farmers by rejecting scores of requests from oil refiners for waivers.

But for some Biden backers, the move was too little, too late.

The waivers “actually destroyed the demand for 4 billion gallons of ethanol, which translates in the U.S. to 1.5 billion bushels of corn,” said Pam Johnson, an Iowa farmer and former National Corn Growers Association president who is backing Biden. “It’s gone. There’s no getting it back.”

Mark Mueller, chair of the Iowa Corn Growers Association’s political action committee, said some of the group’s members will vote for Trump no matter what. Others will simply sit out the 2020 election.

“There are a lot of farmers who are disgruntled with our president and saying, ‘Screw it, I’m just not going to vote,'” Mueller said.

With urban and minority voters vastly favoring Biden, more farming families moving to Biden or sitting out the election could tip states like Iowa in his favor.

“We depend on the natural resource base and climate is a part of that,” she said. “Cows don’t like it hot.”

Stuedemann explained that climate affects crop disease, animal health and animal production. She said she was “embarrassed” Trump withdrew from the Paris Agreement, a global pact to fight climate change. Biden said he will recommit to the accord.

Supporting Biden can come at a price in rural areas, however.

In Ohio, soybean grower Christopher Gibbs said he and his family were shunned by fellow-farmers after he began writing op-eds for local newspapers criticizing Trump. Men ridiculed him at the local diner. Gibbs, who voted for Trump in 2016, said he left the Republican Party in part over the China trade war.

“I’ve had women walk up beside me and refuse to make eye contact, because they don’t want anyone to see them talking to me,” Gibbs said. “They’ll say under their breath, ‘Keep doing what you’re doing,’ and then quickly walk away.”