Biden Has Officially Won: What’s Next For Traders?


After one of the most contentious and acrimonious campaigns in history, the end is finally upon us.

While states like Georgia, Pennsylvania, Arizona, and Nevada are still putting the finishing touches on their vote counts (and President Trump is still threatening litigation over the ballots and recounts in several states), former Vice President Joe Biden has officially been declared the winner of the 2020 US Presidential Election by the AP, NBC, CBS, ABC, Fox News, and CNN.

Meanwhile, control of the Senate still hangs in the balance, with the Republicans likely to land on 50 Senators while the two Georgia races head to a special election on 5 January 2021 (note that we’re assuming a couple of unofficial results will go for Republicans, in-line with historical precedent). Assuming Biden takes the White House, Vice President Kamala Harris would cast the deciding vote in the event of a tie, so Democrats would need to win both of these races in the traditionally Republican state to “control” the Senate by the narrowest of margins. While it’s certainly possible Dems could win both, the market appears to be pricing in a split government (Democratic President, Republican Senate, Democratic House of Representatives) for at least the next two years.

What can we expect next from markets moving forward? As we’ve noted repeatedly, traders are a forward-looking bunch, so we can look at the moves we’ve seen since election night as a harbinger of the short-term trends to expect in the coming days and weeks:

When it comes to the FX market, “King Dollar” has been more “Pauper Dollar” this week. The is by far the week’s weakest major currency, falling by more than 1% against all of its major rivals, and by over 3% against the resurgent . The buck is also probing its lowest level in nearly six years against the : 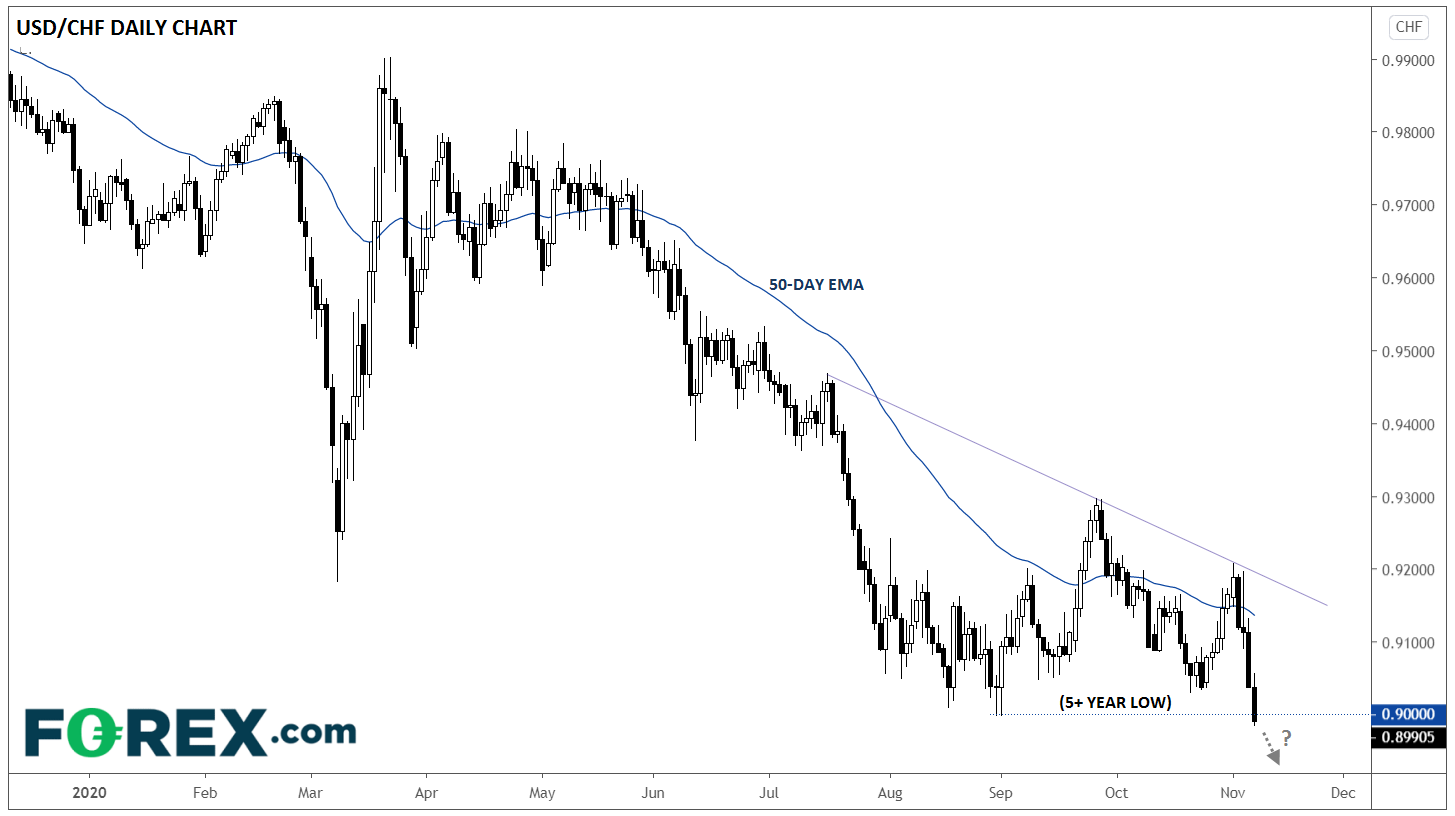 The cleanest narrative for this move is that, with COVID cases growing exponentially across the US and a split government likely, a massive $2-3T+ stimulus package is looking increasingly unlikely. If that view proves correct, the nascent US recovery could stall as we move through the winter, making other currencies with more responsive fiscal authorities and a better control of the virus more attractive.

Equities: More of the Same

Uninhibited, capitalism tends toward dominant oligopolies and monopolies. That’s exactly what we’ve seen over the past couple of years when a Republican President and Democratic-controlled House of Representatives were unable to unite against the technology behemoths that continue to gobble up market share. With another rough couple of months expected for “main street” brick-and-mortar businesses slowed by COVID-19, the FAAMG stocks may continue to gobble up market share and put their smaller rivals out of business.

This scenario would be bullish for tech-heavy, large-cap indices like the , especially at the expense of their smaller capitalization rivals like the , a trend that has been unstoppable over the last couple years already: 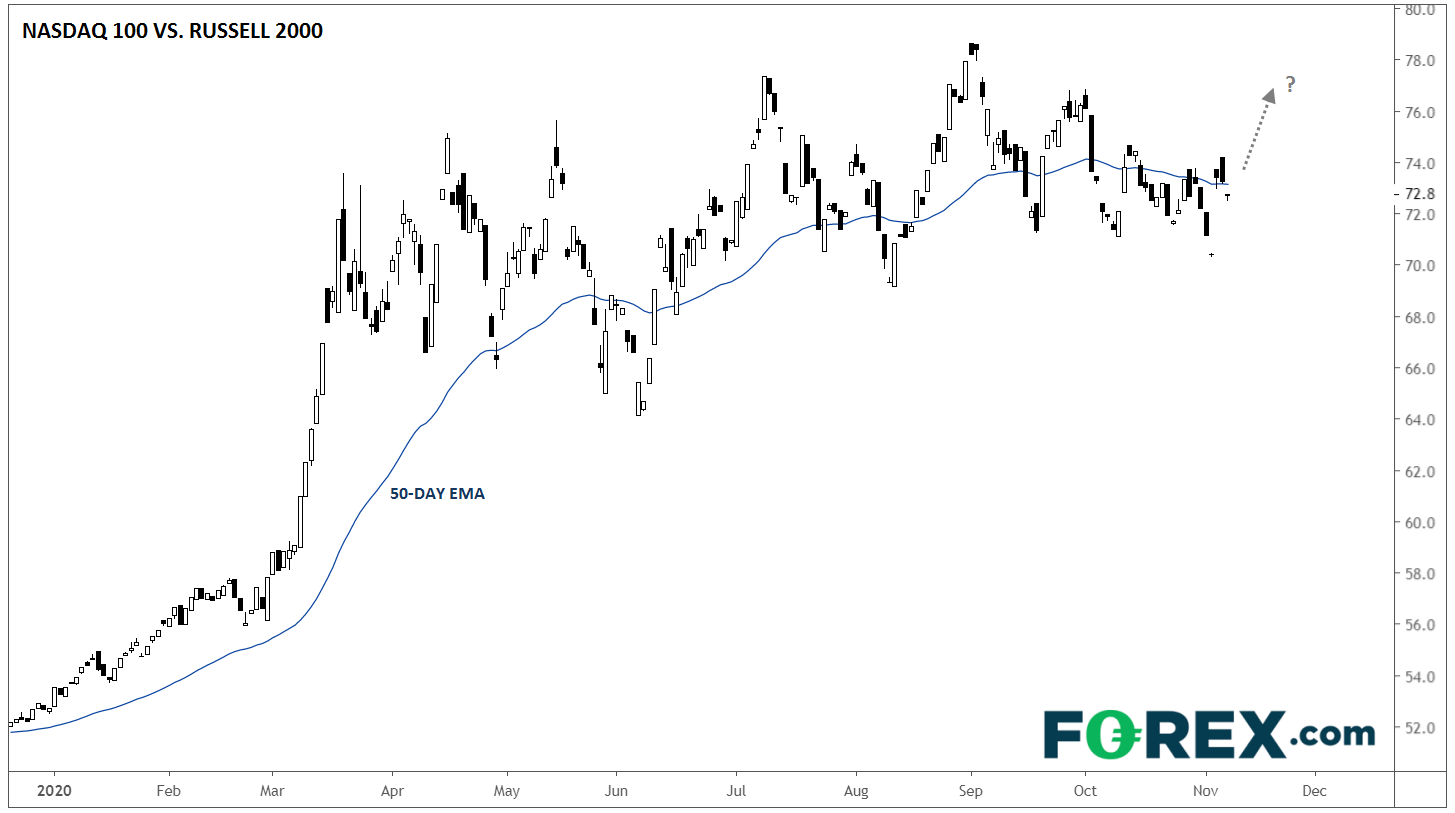 Commodities: Fed to Keep its Foot on the Accelerator?

Finally, tying together the comments above, the Federal Reserve will likely have to leave the monetary spigots wide open to account for an expected lack of action from US fiscal authorities. With asset purchases and near-zero percent interest rates likely to remain in place for years to come, commodities like and that are priced in the US dollar may see a tailwind under the expected US political regime. As we can see below, gold has already caught a bid this week and could soon make a run back toward the psychologically-significant $2000 level next. 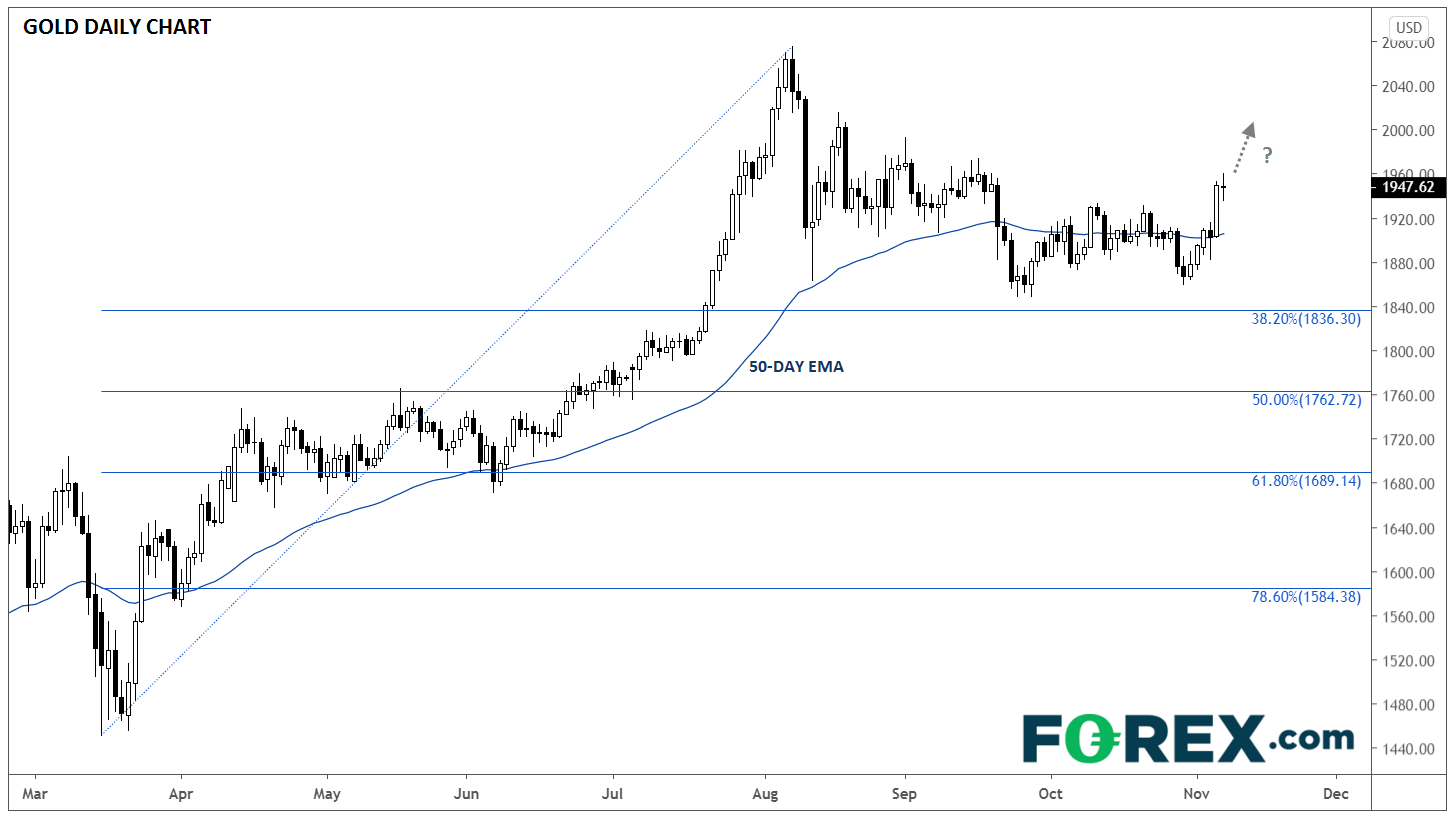 Of course, there are many factors beyond just US politics influencing all of these global markets, so traders should continue to monitor the virus data, market trends, global geopolitical developments, and the prospects for fiscal/monetary policy in other countries as well. In fact, we’re looking forward to returning to a more “normal” environment that isn’t so focused on US politics in the days and weeks to come!