is the main newsmaker of recent times, returning to the role of crypto leader. The benchmark coin spiked 4.5% in the last 24 hours and changes hands at $12,800. Since the beginning of the week, Bitcoin climbed by more than 11%.

At first, the coin was supported by investment news from major institutional companies, including Square (NYSE:), MicroStrategy (NASDAQ:), and Stoneridge (NYSE:).

It was later reported that the British fintech company Mode Global Holdings (LON:) will allocate up to 10% of capital to buy BTC as a reserve asset. However, the impact of this news is nothing compared to PayPal’s (NASDAQ:) announcement about the ability to buy and sell cryptocurrencies, including Bitcoin. 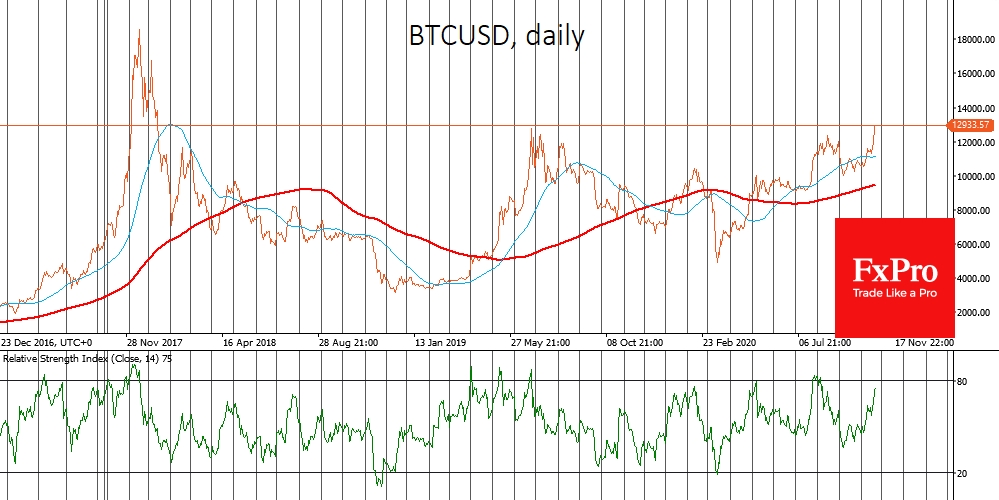 At current levels, Bitcoin is testing cyclical highs. Since the beginning of 2018, it has not been able to gain a foothold at levels above $12,000. It is equally important that at new highs, indicators like the RSI are far from the overbought condition, indicating significant potential for further growth.

Closing the week above $12,800 would be the highest level in two and a half years, opening a direct path of growth to the historic highs of $20,000 that we saw three years ago.

As of the second quarter of 2020, PayPal had nearly 350 million active users worldwide. The company processed more than $200 billion worth of payments in the second quarter. PayPal’s cryptocurrency payments will be proceeded using Fiat, including the American . Thus, sellers will receive payments not in the form of digital currency, the price volatility of which did not allow it to become a massive means of settlement.

Besides Bitcoin, it will also be possible to buy , , and . All these coins have shown growth over the last 24 hours, but in the case of LTC, it was particularly noticeable as the coin spiked by 14%. It appears we are witnessing such a massive growth because of the oversold condition of the cryptocurrency.

Bitcoin breaking through two round levels of $12K and $13K opens doors for further growth. The current price dynamics led the coin to re-test the peak of July 2019, which at that time was the highest point of the rally. Nowadays, purchases take place against the background of confidence that Bitcoin has more and more supporters in the traditional financial world.

Against the extreme turbulence in finance, geopolitics, and epidemiology, investors are increasingly paying attention to Bitcoin, which is growing faster than the stock market. Since early 2020 it has grown by 77%. The average BTC transaction size has also grown significantly since July this year. Four months ago the average transaction was about $25,000, but by October 2020 it has jumped to $150K.

Crypto market participants attribute the growth to the demand from institutional investors, the growth in the dominance of the first cryptocurrency, as well as the launch of “post-halving” potential. Of course, the future of the coin will fully depend on the ability to consolidate around current levels and show consistent growth.