Bitcoin Cash Fork Has Exchanges Scrambling For A Solution


Various cryptocurrency exchanges have detailed their plans to handle an upcoming hard fork, which could split the cryptocurrency into two separate coins next week.

Exchanges Will Support Both Coins

At least five exchanges have announced that they will support both Bitcoin Cash tokens if a split occurs.

Binance believes it is “likely that there [will be] a chain-split between the two main BCH clients,” while Huobi Global says that it will “support the BCH hard fork.”

Though their exact policies vary, these exchanges will allow users to hold coins under two separate market tickers: BCHN (for Bitcoin Cash Node) and BCHA or BCHABC (for Bitcoin Cash ABC). This also means that BCH holders will be airdropped a coin from the minority chain at a 1:1 ratio, the same as would happen if they were holding Bitcoin Cash in a non-custodial wallet.

However, that outcome is only possible if the Bitcoin Cash community decides to maintain the forked chain for a significant amount of time. If the community quickly abandons the minority chain, the situation may be immediately resolved.

The dominant coin will likely be designated BCH, even if a second coin exists.

So far, only Gate.io has hinted at the possibility that the two forked coins will last long enough for regular trading: “If we are going to support the trading of “Candy” [the minority coin] we will let you know by posting it on our announcement.”

Other companies have also weighed in on the fork. Hardware wallet manufacturer Trezor, for example, says that it will only choose one coin to support, favoring the chain with greater mining power.

Will Bitcoin Cash Split in Two? 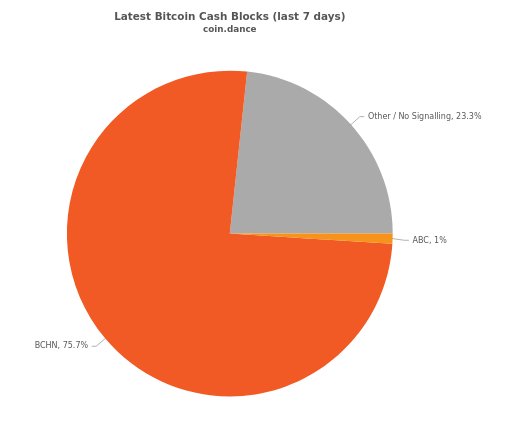 The central issue during this fork is an Infrastructure Funding Plan (IFP) that was proposed by Bitcoin Cash ABC earlier this year. That proposal taxes miners to fund BCH development, which caused significant backlash within the Bitcoin Cash community. Several mining companies denounced the plan in August.

However, Bitcoin Cash ABC was once the dominant node software, and parts of the Chinese mining community favor the IFP. As such, it will not be clear how the hard fork plays out until it actually occurs. The fork is set to take place on Nov. 15, 2020.