Bitcoin Crashes. You’ll Be Surprised To Hear What’s Next

Our team also believes that once Bitcoin cleared the previous Fibonacci Arcs, a bit of a “reprieve” took place in price where a moderate upside price rally too place. As we neared the Triple Fibonacci Arcs, price activity muted and reversed. Could it be that price reacts to frequency levels we are not seeing on the charts? 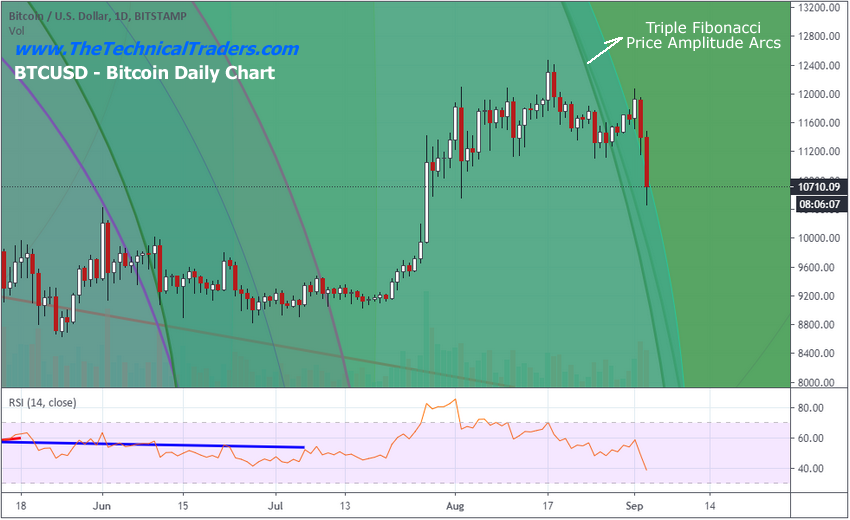 The Weekly BitCoin chart, below, highlights many of the origination points (peaks and troughs) of the Fibonacci Price Amplitude Arcs. We anchor them to price peaks or troughs as a way to use and study them, measuring critical price waves (up or down) using Eclipse drawing tools, then drag them and anchor them to current or past peaks or troughs. Then we study the levels to determine if the frequency of price validity is accurate or not. If we believe we have drawn a Fibonacci Price Amplitude Arc that is valid, we’ll keep in on the chart for future reference. 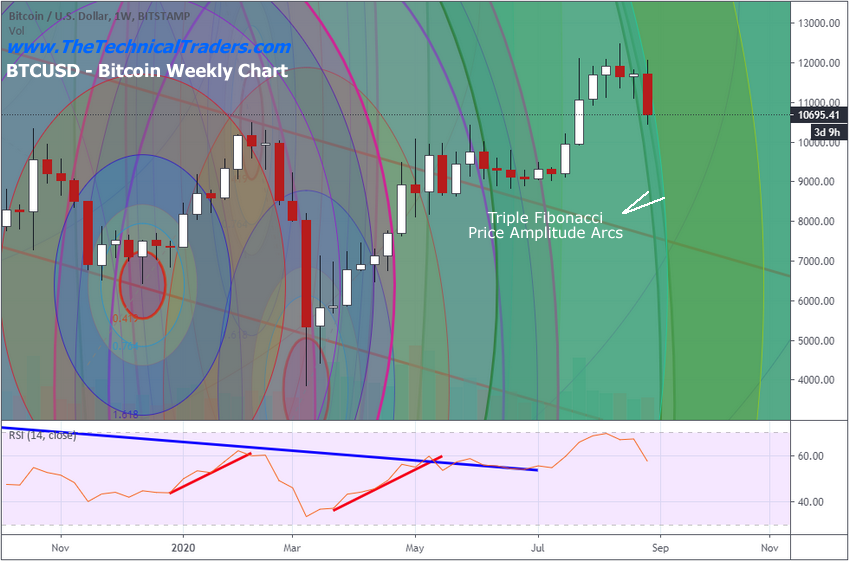 We believe this current Triple Fibonacci Arc pattern may be present in other symbols given how the US stock markets have reversed recently. It may be that these critical price inflection points operate across major indexes like tides in the ocean work across multiple ports and harbors. When a big or critical Fibonacci Price Amplitude Arc hits, we believe it results in a broad market reaction.

If this breakdown in Bitcoin Continues, the $8k level would be the next downside price target. Beyond that, possibly $7k and maybe as low as $6k. We will have to see how Bitcoin reacts to this Triple Fibonacci Price Amplitude Arc and how deep price corrects at this time. It is very likely that Bitcoin price levels will fall below the May through July levels, near $9k in an attempt to identify new support levels.

We also believe Gold and Silver will move lower as a price collapse in Bitcoin suggests the general market fear is hitting all global assets. The US dollar may attempt to form support as well because of this move. As other assets decline in valuation levels, some primary currency will likely be viewed as the strongest alternative asset – this will likely be the US dollar. Eventually, after what we believe could be a moderate downtrend in Gold and Silver, precious metals will begin to move dramatically higher as foreign currency and Bitcoin prices continue to fall. Capital will always seek out the best, least risky, investment solutions at times of chaos and risk. If Bitcoin becomes highly volatile and continues to fall, then alternate assets present very real opportunities.