History of Money and Gold

The seeds of the 1970 bull market in gold were sown back in 1944. After World War II, forty-four countries signed the Bretton Wood Agreement, which shaped the global currency market until 1973.

The agreement pegged the U.S. dollar to and all the other currencies against the dollar. It attempted to build a regime where the U.S. dollar was equivalent to gold as a reserve currency.

And, the U.S. became quite successful in achieving this vision.

However, with global industrialization and inflation in the dollar, the preference for gold and other currencies began growing. This caused a gold rush by 1970, as people rushed to swap their bills for the precious metal. Hence, in 1971 US president Richard Nixon broke the ties between greenbacks and gold, giving birth to the fiat regime that we now know.

With a relatively free currency market, gold’s price grew enormously for the next 50 years.

The monetary inflation and devaluation of the greenback are the basis of Fitzpatricks’ comparison of Bitcoin with gold. The report reads:

“Bitcoin move happened in the aftermath of the Great Financial crisis (of 2008) which saw a new change in the monetary regime as we went to ZERO percent interest rates.”

Fitzpatrick pointed out that the first bull cycle in Bitcoin from 2011 to 2013 when it increased by 555 times resulted from this.

Currently, the COVID-19 crisis and the government’s associated monetary and fiscal response are creating a similar market environment as gold in the 1970s. Governments have made it clear that they will not shy away from unprecedented money printing until the GDP and employment numbers are back up.

The above analysis is music to the ears of any Bitcoin enthusiast. What has been oft-preached across crypto forums is finally going mainstream.

Fitzpatrick did not stop there; his price prediction chart sees Bitcoin price at $318,000 by December 2021. 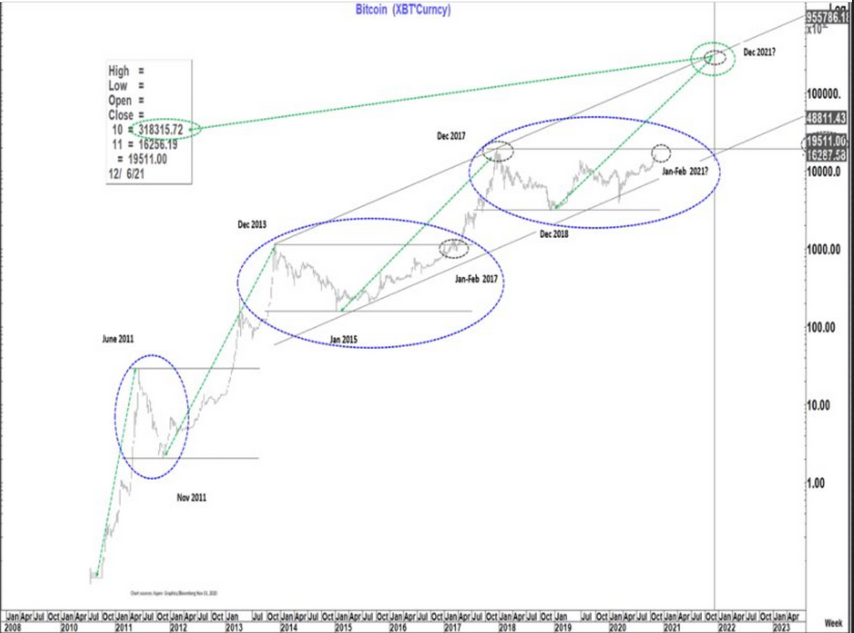 “You look at price action being much more symmetrical or so over the past seven years forming what looks like a very well defined channel giving us an up move of similar timeframe to the last rally (in 2017).”

Fitzpatrick also pegs gold at $4,000-$8,000 based on an imminent economic crisis in another report.

Therefore, in all likelihood, the targets for BTC might seem exaggerated to traditional investors. Nevertheless, the principle theory of a paradigm shift in the global currency market is not new. Economist Ray Dalio has hinted at the debasement of the dollar and a paradigm shift as well.

Bitcoin might be the missing link in the new paradigm.

Moreover, the exposure of such a target to America’s largest bank’s institutional clients is alone bullish for the market sentiments.