Bitcoin ETFs Have Arrived…They’re Not The Cryptocurrency, But They’re Close


This article was written exclusively for Investing.com

Tuesday, Oct. 19, was another milestone for the cryptocurrency asset class as the ProShares Bitcoin Strategy ETF product (NYSE:) began trading on the NYSE. BITO started trade at $40.89, with at $61,905 per token at the open. The ETF allows market participants exposure to the leading cryptocurrency without venturing into the futures arena, owning a computer wallet in cyberspace, or trusting a custodial exchange.

BITO is not a direct investment in Bitcoin as it tracks a derivative, the Bitcoin futures contract on the Chicago Mercantile Exchange, another derivative of the cryptocurrency. There are no guarantees that the futures and the BITO product will fully correlate with Bitcoin prices. However, the listing is the first ETF product that comes close.

A second ETF product which also tracks CME Bitcoin futures, the Valkyrie Bitcoin Strategy Fund (NASDAQ:), began trading on the NASDAQ later the same week, on Friday, Oct. 22. However, this post will be focusing on BITO primarily.

Cryptocurrency devotees have been critical as they would prefer a product that holds the physical Bitcoins much like the SPDR® Gold Shares ETF (NYSE:) holds . However, BITO is another small step towards moving cryptocurrencies into the mainstream investment landscape.

In 2017, when the CME rolled out its first crypto futures contract, Bitcoin rose to a record high. On Apr. 14, the Coinbase Global (NASDAQ:) listing pushed the price to another all-time peak. Last week’s introduction of the first futures-based ETF did the same.

The ETF got off to an impressive start with $1.224 billion in assets under management. BITO charges a 0.95% management fee.

The SEC can monitor and regulate futures

The CFTC oversight allows regulators to monitor all activity.

Meanwhile, the US Securities and Exchange Commission (SEC) has been reviewing Bitcoin and ETF applications over the past years. Gary Gensler, the current SEC Chairman, was the former CFTC chief. The SEC decided that the best route for oversight was to approve futures-based ETFs as the futures contracts were already under a regulatory umbrella, making regulation consistent.

Applications from ETF products that propose to hold physical Bitcoin or other cryptocurrencies present a particular regulatory challenge for the SEC.

Two of the primary issues facing cryptocurrencies are custody and security. Hacking, ransomware demands, and other hazards surrounding cryptocurrency holdings in cyberspace are unique challenges for the regulators.

Opting for a futures-based product kills two birds with one stone. The ETF satisfies the market’s demand for a product that will replicate the price action in the increasingly popular leading cryptocurrency. Meanwhile, the BITO product—which reflects futures and not physical prices—affords regulators a two-pronged approach to control and manage potential manipulation and other areas of concern.

The SEC bought time with its BITO approval. Henry Clay was a US Senator in the 1800s known as the Great Compromiser. He once said that the perfect compromise occurs when both sides of a dispute walk away from the negotiating table unhappy. I look at BITO as a great compromise.

Cryptocurrency devotees would prefer to see an ETF product like the successful SPDR Gold Trust ETF that holds physical gold and is not a futures-based derivative. Opponents who believe cryptocurrencies have no intrinsic value have no time for any market products.

Moreover, governments that favor the status quo are likely concerned that the growth of the burgeoning asset class is a threat to their control of the money supply. As such, governments would like them to remain minor sideline assets, at best.

Square is working on the problem, will mine for cryptos

Square (NYSE:) is a payment company. SQ’s founder and CEO, Jack Dorsey, has said his company is building a Bitcoin mining system that would bring in new software to aid the activity of the leading crypto among users. On Oct. 15, SQ’s CEO—who is also the founder and CEO of Twitter (NYSE:)—tweeted: 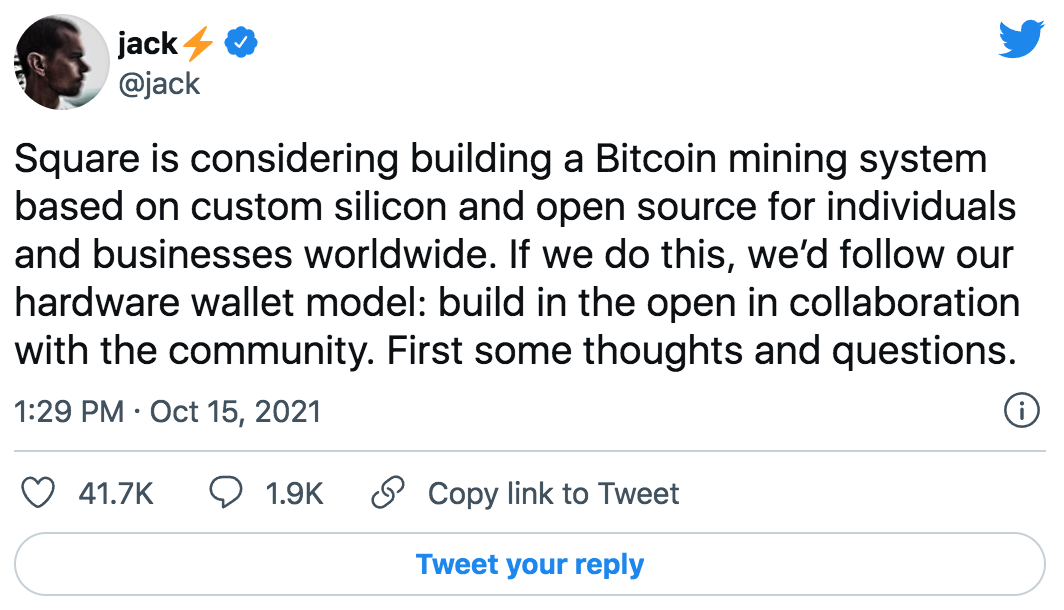 Mr. Dorsey is a huge proponent of cryptocurrencies, which he calls the “currency of the internet.” A robust custody and security solution would go a long way in advancing the asset class and increasing the addressable market of companies, individuals, and even governments’ use of crypto and digital currencies.

Cryptocurrencies are global means of exchange that Mr. Dorsey believes will “unite the world.” Last weekend, he warned that hyperinflation is a clear and present danger, saying, “Hyperinflation is going to change everything. It’s happening.”

Bitcoin’s limited supply makes it an effective inflation hedge so long as it has widespread acceptance, which appears to be Mr. Dorsey’s bet and motivation.

If successful in addressing the custody and security issues, Square could set the stage for a robust physical Bitcoin ETF along with products for other cryptos or baskets of cryptocurrencies. ETFs bring alternative investment choices to individuals through their standard stock market accounts and expand the audience for investment and trading activity.

Mr. Dorsey is a globalist, a visionary, and a leading technology leader. Whether you embrace his global vision or not, he is making waves. Governments are likely not his biggest fans as his work is a direct challenge to their control of the world’s purse strings. Money and power are linked. Returning the power of the money supply to a collective of individuals via the cryptocurrency asset class is a departure from the status quo. Governments will not give up that power without an epic battle.

Performance in the early days

The early performance of the BITO ETF is a sign the market is starving for cryptocurrency products. The ascent of Bitcoin creates a speculative frenzy as everyone wants to participate in a bull market. There have been few bulls in history like Bitcoin.

The ideological side of the coin is perhaps more significant. The rise of the crypto asset class is a rejection of fiat currencies that derive values from the full faith and credit of the governments that issue legal tender. The rise of cryptos reflects the erosion of fiats. If Mr. Dorsey is correct, hyperinflation will rapidly eat away at fiat values. 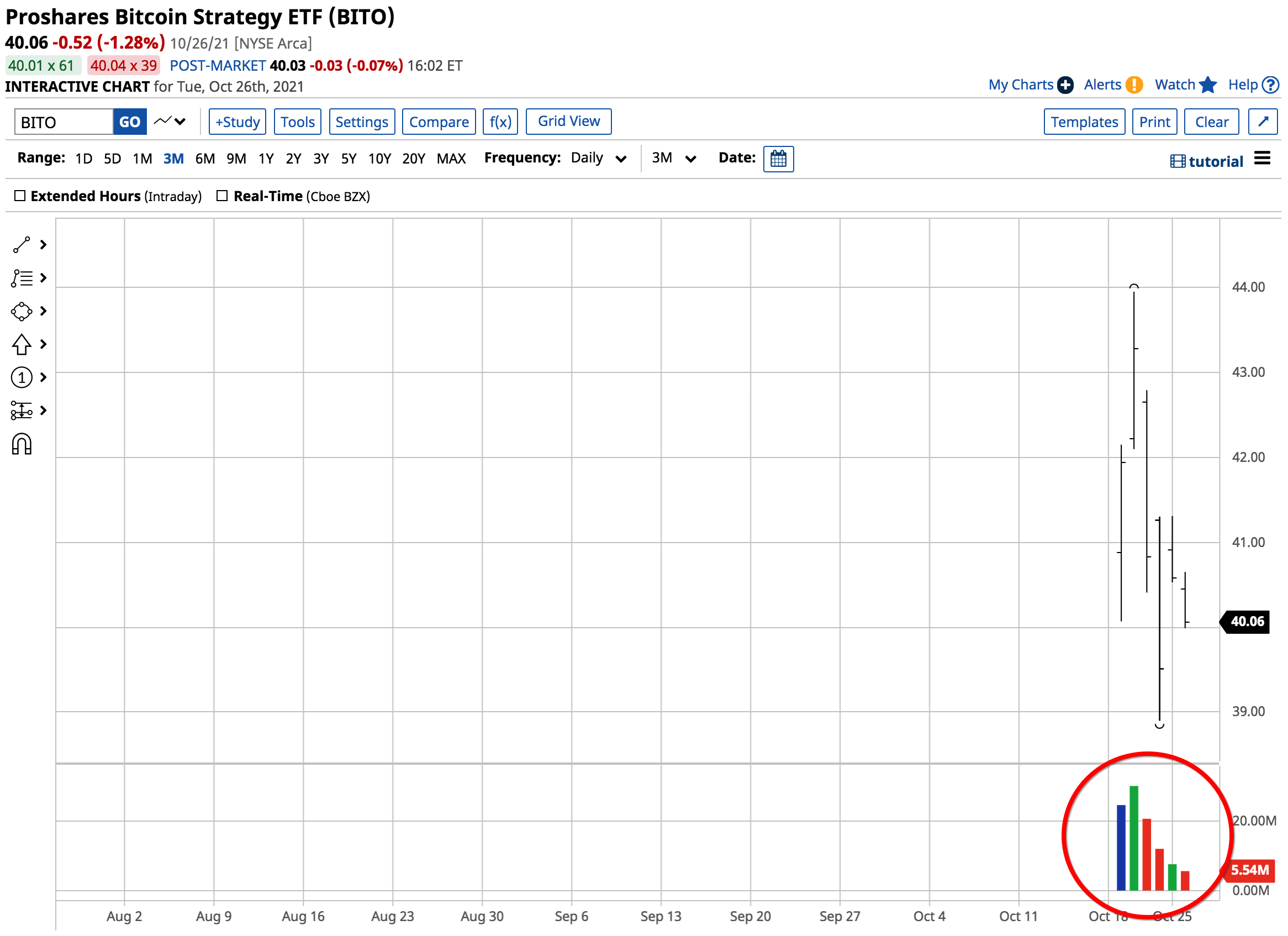 As the chart shows, the volume was impressive during the first two trading days. The volume has been trending lower since reaching a peak of nearly 20 million shares on Oct. 20, the day Bitcoin reached a record high.

BITO followed Bitcoin futures higher and lower, but there was some slight performance deviance. Bitcoin futures and BITO are not Bitcoin, they are derivatives of the leading cryptocurrency.

Bitcoin trades around the clock, seven days a week. The futures and ETF only trade during market hours. The ETF has limited hours as it is only available when the stock market is open for trading.

Over the first days, volume was robust, but it has been trending lower. Bitcoin futures are not Bitcoin; they are a proxy. And BITO is a proxy’s proxy.

While BITO is a step in the right direction, a physical ETF that reflects Bitcoin as GLD reflects gold is the next step in the asset class’s evolution. Mr. Dorsey is a revolutionary mind, and he is working on the custody and security issues that will give the regulators comfort to allow a physical product. Meanwhile, no product will address the ideological divide over the money supply.

The battle of global fintech versus the status quo of government and traditional banking is only getting underway.