Bitcoin Is Overbought But Crowd Excitement Supports It


is again the focus of mainstream media attention, as the benchmark crypto coin has jumped up 54% in just one month. This is probably what allows BTC to so far avoid a full-scale correction. In addition to institutional investors, demand can also grow among retail buyers. The truth is that BTC attracted the main attention of large investors after the March collapse when it was bought back at $4.5K. However, nobody likes losing stories, and this is what the market is all about. The enthusiasm among the general public begins only when the asset is already at the peak of the bullish cycle. 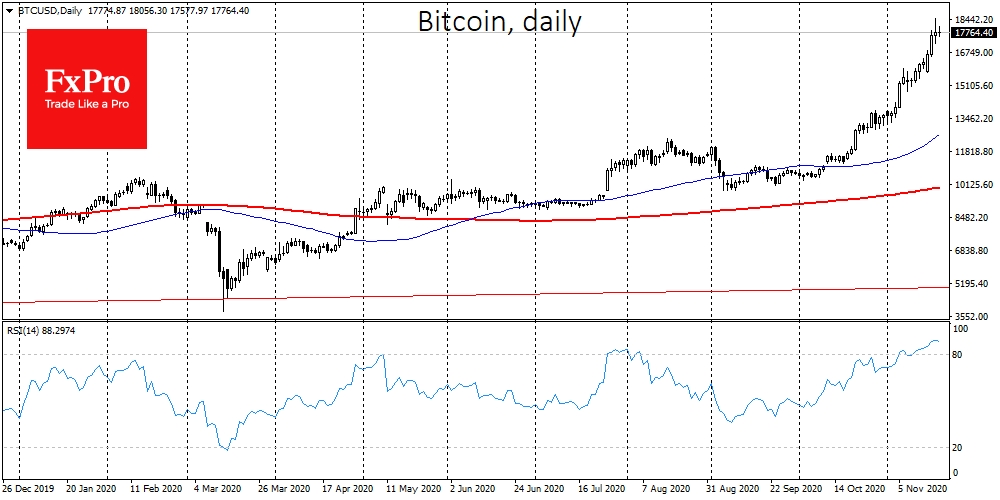 Of course, the current highs are not final, and Bitcoin is likely to exceed $20K, but a real roller coaster awaits the cryptocurrency along the way. The hypothetical retail investor is now asking only one question: isn’t it too late to buy Bitcoin? It is not too late if there is a willingness to take the risk, quietly watching the massive rollbacks, and then taking a relatively small profit and then waiting for some time continued growth. A really good time to buy was back in March when everyone was fearful.

At this point, Bitcoin will have to pass a serious test. The BTC is at a very high price level, with technical indicators showing that it is extremely overbought. Thus, the Crypto Fear & Greed Index for Bitcoin and the largest cryptocurrencies has reached “94”, which corresponds to the “extreme greed” mode. Of particular concern is the fact that the indicator was at these maximum values at the end of June 2019, when the crypto market passed the peak of the rally and started the correction. In addition, the RSI index is at its highest levels since June 2019, the last time that there was a prolonged correction after growth. 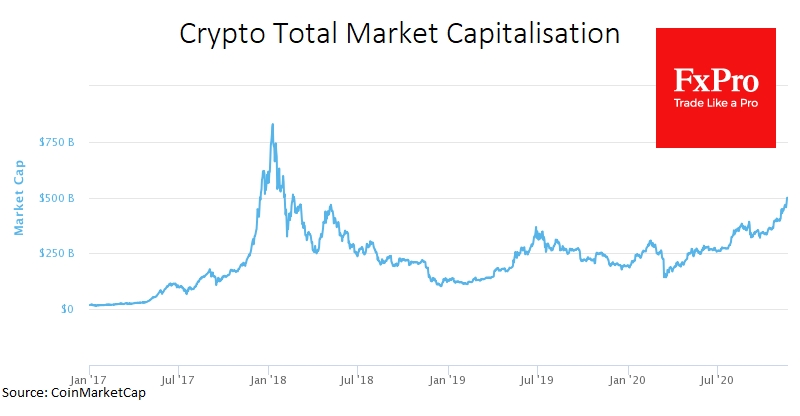 These are factors against continued Bitcoin growth, however, market indicators are impressive with the total capitalization exceeding $500 billion. It should be noted that this threshold was only surpassed during the historic crypto market rally in 2017. The Bitcoin Dominance Index is also very high, currently at 66.2%. In December 2017, it was around 63%, after which it began to decline rapidly due to the growing popularity of altcoins. Now the main focus is on Bitcoin, but as the number of mentions of cryptocurrencies in the media increases, interest in altcoins will also begin to intensify, as retail investors will be looking for options for successful investment at relatively low prices.

Grayscale Investments reported that their investments in crypto assets exceeded $10 billion, contributing to the growth of cryptocurrencies. The fund includes leading crypto coins including BTC, , , , , and . Bitcoin has been growing rapidly lately and the transformation of past resistance levels into reliable support levels, the exit of technical indicators from the extremely overbought zone, and the possibility of aggressive asset buyback at a discount could well form the basis for the rally to continue.