is clinging to $16K and is even showing attempts of further growth. At the start of a new working week, BTC adds more than a per cent and trades above $16,300. Approaching $16,500 on November 13th was a serious test, which briefly pushed the price to $15,800. This level of support was stronger than the bears’ intentions and the coin bounced up. Since then, a tug-of-war between bulls and bears has been taking place around $16K. Thus, the ability of Bitcoin to overcome the area of $16,450 – $16,600 can clear the path for the coin to $17,200 and higher. 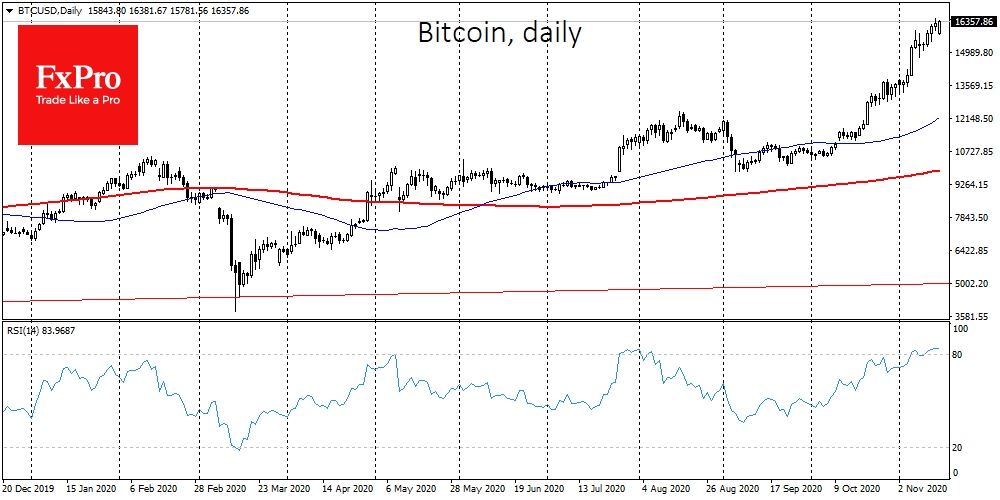 The Crypto Fear & Greed Index is in the “extreme greed” mode at “90” since last week. In theory, the higher the value of the index, the sooner the sell-off, however, FOMO (fear of missed opportunities) does not allow market participants to start a full-scale correction. As long as the dynamics remain positive, the Bears’ attempts to launch a correction are crushed by high demand from buyers. At the first signs of slippage, we could see a sharp drop in the price, as sellers may rush to take profit.

Judging by the reduced trading volumes, some players have already switched to standby and are waiting for new triggers. In this case, the following rule may play out, which for a long time was especially relevant for the crypto market: what does not grow, then falls. But this won’t necessarily bring a negative message, as a moderate rollback may attract new buyers who are afraid to enter a constantly growing market.

As the end of the year approaches, analysts are beginning to sum up the interim results. The current year has brought negative outcomes for most industries, but Bitcoin jumped by 125% against this background. The main difference compared to 2017 is that back then, the price was growing on retail demand. Now, institutions play on the side of Bitcoin. In 2017 after the launch of futures, it began to decline sharply, but now it is large investors keeping it from correction.

However, one of the most famous bulls, Cameron Winklevoss, believes that the process of institutes entering Bitcoin is still just beginning, so $16K is a low price. Bitcoin shows a significantly higher yield compared to gold, while the market capitalization of BTC is just over 2% of the gold capitalization. This fact cannot be ignored by large capital, so the end of 2020 may be bad for most assets but not for Bitcoin.