Bitcoin, The Sky Is The Limit


has decoupled from markets. It is running on its own now. Legendary investor Stanley Druckenmiller said: “I’m a bit of a dinosaur, but I have warmed up to the fact that Bitcoin could be an asset class that has a lot of attraction as a store of value”. Bitcoin, the sky is the limit.

When birthed in 2009 it took great foresight of the essential need of Bitcoin in the future. Now it is in plain sight how well this limited supply cryptocurrency fits a world in financial crisis. With governments having run out of options stirring towards the cliff through printing seemingly unlimited fiat currencies we are lucky to find a way on how to preserve our wealth.

In our last weekly crypto chartbook we pointed out principles why Bitcoin fits the bill so well. Today our focus is on timing and possible rewards. While post-election drama and covid numbers stirring into the cold, the crypto winter just ended. 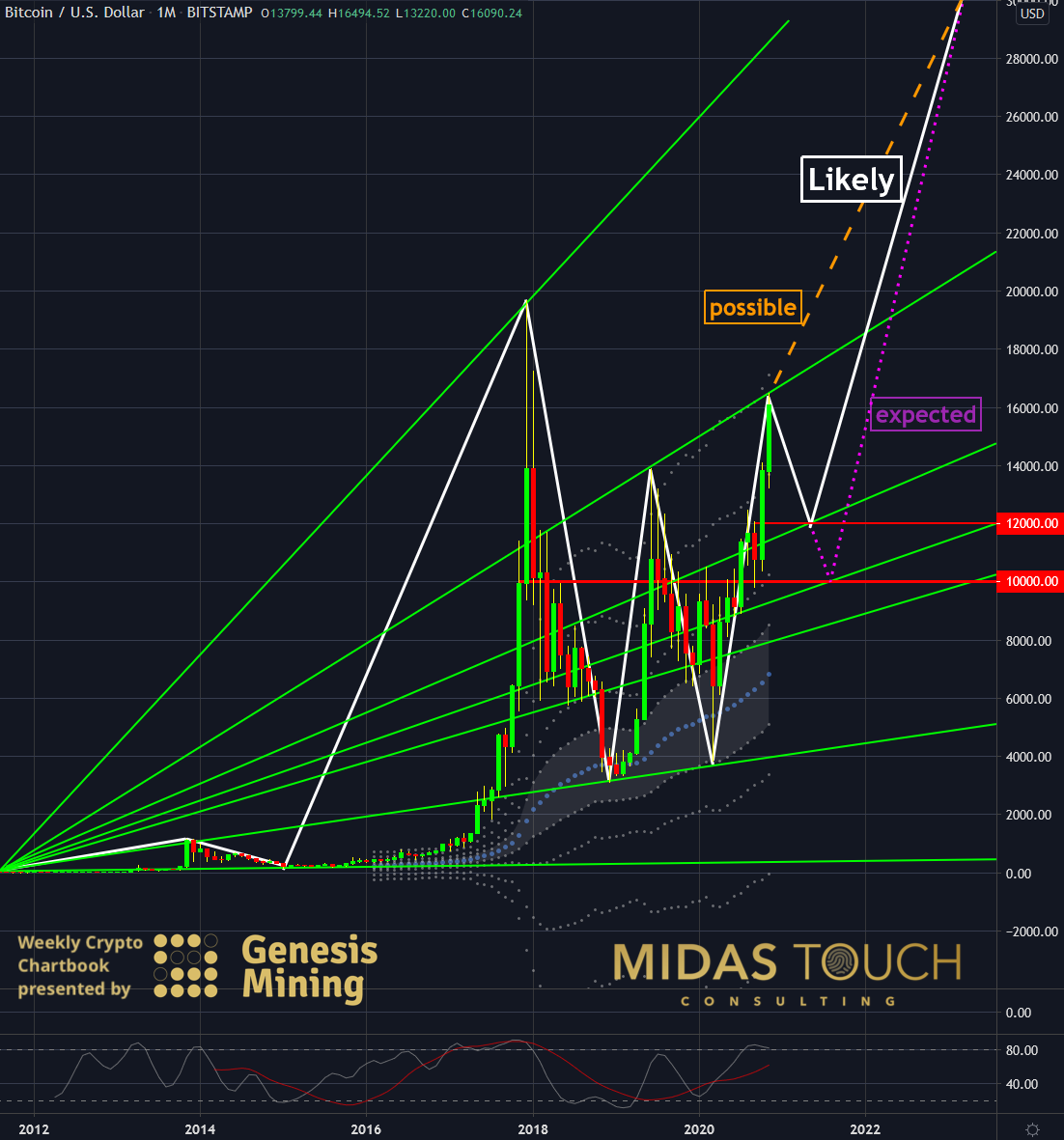 Timing is always pure speculation. There have been certainly way more misconceptions made about timing than price levels. The great thing in regards to bitcoin is that timing is less essential. When you have a limited supply all you know is that when eventually the news reaches everybody’s ear and circumstances have made the item more essential in its use, its value will rise. That being said, we are less worried about timing since the goal isn’t necessarily to sell at the right time but rather to accumulate at least a small amount at reasonable prices. Reasonable, that doesn’t necessarily mean cheap in the aspect to where prices are right now but rather fair priced and still cheap in aspect to where prices might be heading.

The trick here is to give oneself an option to participate in all eventualities through money management (= position size) and not rule out any likelihoods. 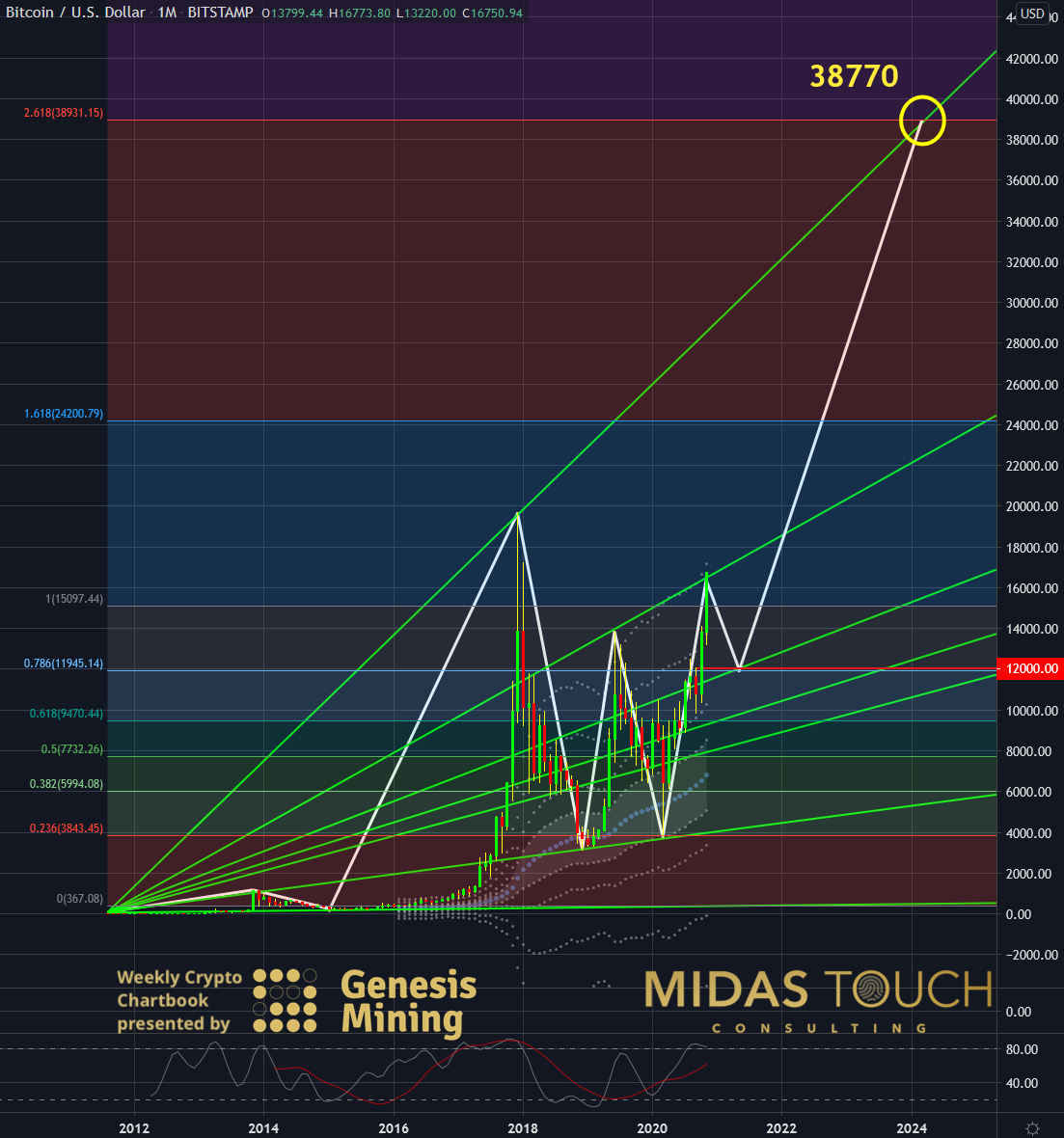 There are all sorts of speculation what Bitcoins final, highest target price level might be. Maybe this is the wrong way of thinking? If you have a limited supply of something that everybody wants and you have certainty that no new supply can ever delude the value. Don’t you want to have some of that? Better said, don’t you just need some of that. We think that it is less relevant how cheaply you got it, but that at least a small amount of something with that characteristic is a good thing to call your own.

Again we are looking at the monthly chart of bitcoin above. This time with our next significant target projection from a Fibonacci perspective. 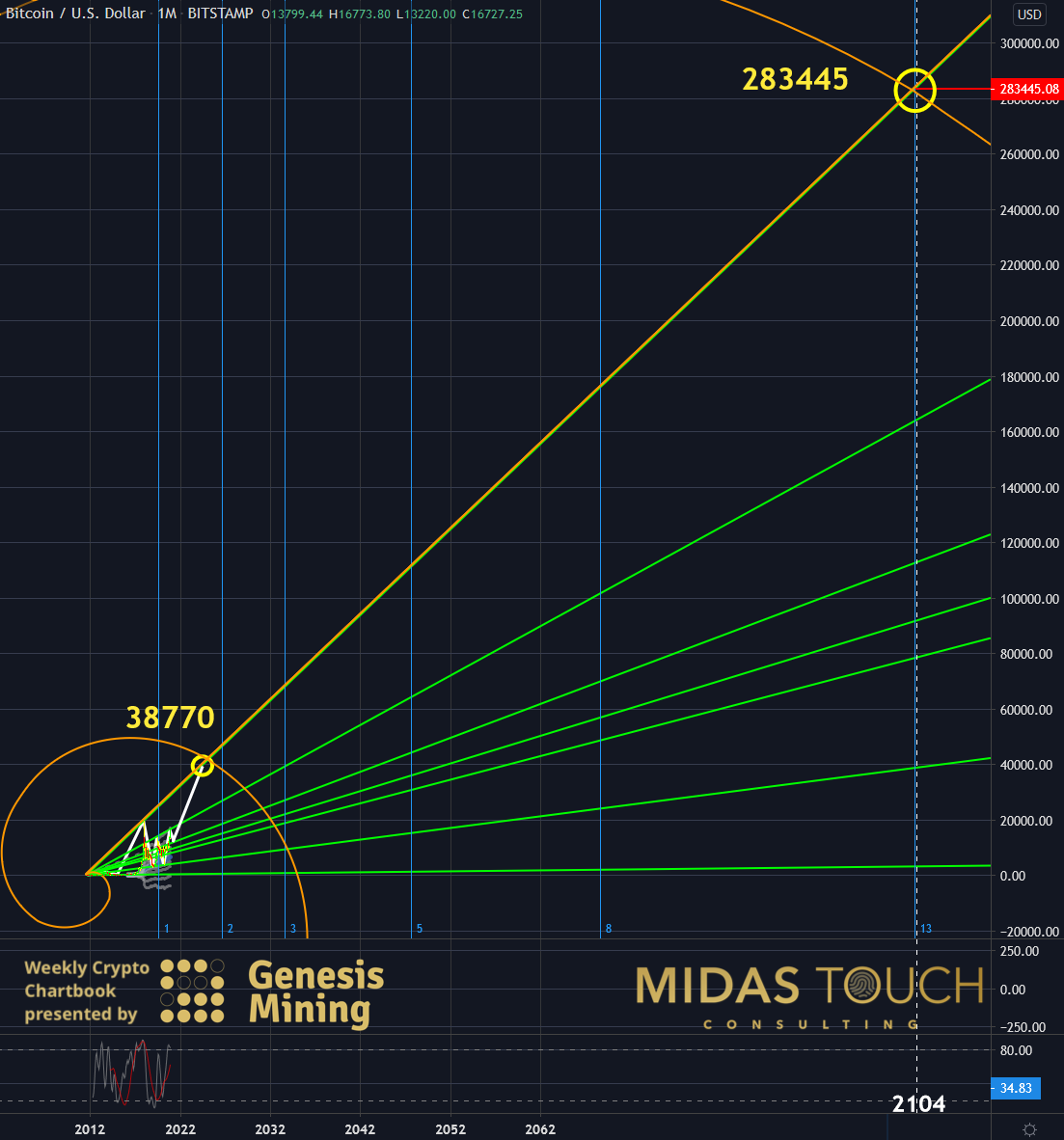 The average life span of global reserve currencies from 1450 to 1920 is 94 years. By 1920 the US dollar had replaced the British pound as the world’s leading currency. This gets the dollar past the expiration date with its one hundred year existence. The monthly chart again extended on its horizontal time span, projects these figures as ballpark onto Bitcoin. (with a 95-year projection, including now the dollar and assuming its near end.)

Stanley Druckenmiller isn’t the only old school wall street tycoon who favors Bitcoin. Bill Miller recently said about Bitcoin that “its staying power gets better every day.” To us, it carries much value when highly experienced traders and investors more and more validate this more “modern” asset class. We find that many who originally spoke out against Bitcoin, are now joining in, to not miss out on a lifetime opportunity.

Bitcoin, the sky is the limit

We have seen Bitcoin in the past rise with phenomenal speed to unimaginable highs of price. It is typical for this asset class. There is much talk about the much anticipated deep retracement where one can cheaply load up on a long position. But many had long faces in 2017 as well seeing the trend simply continue on Bitcoin and missing the ride.

We don’t mean to say to chase a trade or hodl or in any other way buy blindly. What we find prudent though is to take low-risk entries in the direction of the trend. With the quad exit method, you find yourself over time in a compounding accumulation of low-risk rest positions for the long term hold.