Bitcoin: Time To Be Greedy When Everyone Is Scared?

The crypto market has started a healthful correction. Crypto prices can show sharp fluctuations, so the main thing to know is that this stage was needed to continue the rally. Technical indicators have been in the extreme overbought territory for too long. The rally started to “choke up” on the way to $20K. This is a very serious psychological and technical level of resistance for the market, and there was no doubt that this obstacle would test investors’ optimism. 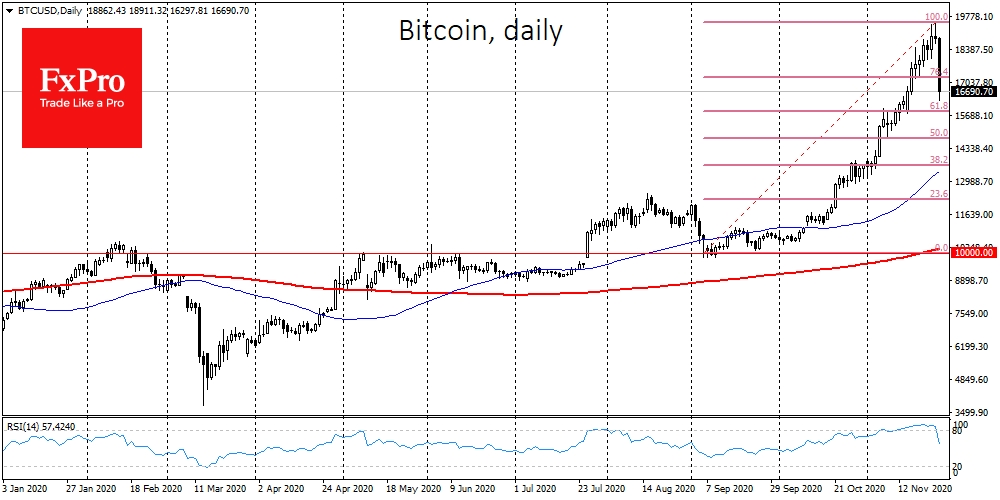 At the time of writing, is declining by 11% and is changing hands at $16,800, completely losing its positive price dynamics for the last 7 days.

The technical indicators, including the Fear & Greed Index and RSI, which have long been in an overbought state, have worked well, similar to June 2019, when the correction began.

The rally started in the area at $10K up to the ceiling at $19.5K. The rollback to $16K is within the scope of the Fibonacci correction, but a rapid decline below that level will wipe out all the upward movement of October-November.

It seems that some investors decided to take the profit from growth in the run-up to the weekend in the U.S. Earlier in 2017, the Bitcoin rally abruptly turned around just before Christmas. Perhaps this is due to expectations that many retail investors will take profit in “fiat” after the growth. But this movement is unlikely to have been generated by retail investors.

CoinTelegraph reported that shortly before the correction began, the All Exchanges Inflow metric showed an increase in bitcoin placement on exchanges, which is a direct indication of the whales’ intention to sell their assets. This promises increased turbulence in the near future.

Altcoins have recently shown much more positive dynamics than Bitcoin, gaining hundreds of per cent in just a few days. Of course, they are now declining faster than before. During the day, retail investors can find great opportunities to enter with a large discount in price. The main thing to understand is whether now is the time to be greedy?