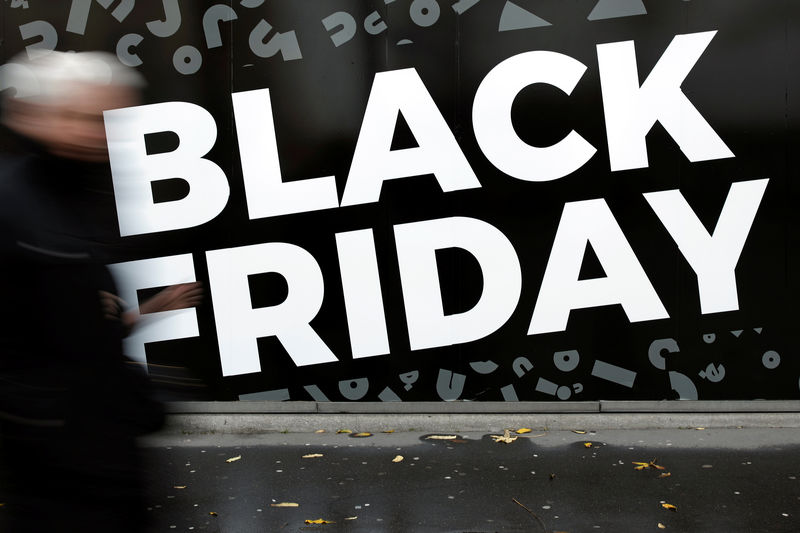 Investing.com — Black Friday is here, but the shopping season is set to different with online sales likely to surge. European banking consolidation is put on hold in Spain, while AstraZeneca (NASDAQ:) is unlikely to feel much love as Wall Street returns from its Thanksgiving holiday. Oil is trading mixed as a crucial OPEC+ meeting looms, while sterling retains strength and stocks are seen continuing the recent positive trend. Here’s what you need to know in financial markets on Friday, November 27th.

1. Black Friday arrives, but with a difference

It’s Black Friday, traditionally the busiest shopping day in the United States, but this being 2020, things are set to be different.

Pictures of shoppers fighting to get into shops in the search for bargains have been the staple of news channels for years, but Covid-19 restrictions have forced shops to divert most purchases online.

Many major retailers, hit hard by the pandemic, started offering their Black Friday promotions much earlier than usual, taking their lead from Amazon (NASDAQ:) hosting their Prime Day in the middle of October, in order to capture as much holiday-related as possible.

It’s still likely to be a bumper period for the major retailers, with the National Retail Federation forecasting U.S. holiday retail sales will increase between 3.6% and 5.2% over 2019, for a total of $755.3 billion to $766.7 billion. This compares with an average annual increase of 3.5% over the past five years.

Banco Sabadell stock slumped 12% after its potential merger with rival BBVA collapsed, just two weeks after the two Spanish banks announced plans for a tie-up. The disagreement seems to center around the price of the deal, which would have resulted in a bank with a market capitalization of around 27.5 billion euros ($33 billion).

BBVA, Spain’s second-largest bank, said it was in no rush to scale up its operations given it already has around 15% of Spain’s market share, while Sabadell said it would launch a new strategy to prioritise domestic business.

European lenders have been under considerable pressure, with the financial challenges surrounding the Covid-19 pandemic adding to their woes. Consolidation of the region’s fragmented banking sector has been seen as a way forward, and even before this CaixaBank and Bankia had announced plans to merge in a deal that would create Spain’s largest domestic bank, with a combined market capitalisation of almost €17 billion.

U.S. stocks are set to open higher Friday, although gains are likely to be limited with the market set to close early in the aftermath of the Thanksgiving Holiday.

Generally positive coronavirus vaccine news and emerging political certainty in the U.S. have prompted strong gains on Wall Street, with the topping the 30,000 mark for the first time earlier this week.

President Donald Trump said on Thursday he will leave office if the Electoral College votes for President-elect Joe Biden. This is the closest he has come to conceding the election, and adds to the feeling of normalcy returning to U.S. political circles.

AstraZeneca (LON:) will be in focus when Wall Street opens, after Moncef Slaoui, head of Operation Warp Speed, expressed concern over the viability of the data used to create the 90% efficacy level for the drug maker’s Covid-19 vaccine candidate.

Sterling remains near three-month highs against the U.S. dollar, despite U.K. Finance Minister Rishi Sunak’s horrific spending review a couple of days ago.

Sunak laid bare the weak state of the U.K.’s finances, saying that Britain is set to borrow almost 400 billion pounds ($533 billion) this year, equivalent to 19% of GDP, the highest ever in peacetime. He added that the British economy is set to contract by 11.3% in 2020, the largest fall for more than 300 years.

Yet, despite this, sterling remains relatively strong with traders continuing to expect late progress on Brexit talks between the U.K. and the European Union, with EU chief negotiator Michel Barnier traveling to London late Friday as the two sides try to resolve differences over fishing and competition policy.

“Once again, the make-or-break moment for sterling (with asymmetrical downside risks in case of no deal) looks around the corner, but timing remains a big question mark,” said analysts at ING, in a research note.

Crude oil prices traded mixed Friday, but still close to their post-pandemic highs as attention turns to next week’s crucial meeting of OPEC+.

Reuters reported Friday that the leading oil producing countries, a group known as OPEC+, will hold informal online talks on Saturday prior to next week’s key meetings.

The group has come under pressure to maintain the current level of oil production, given sluggish oil demand and fallout from the coronavirus pandemic. OPEC+ had previously agreed to increase output by 2 million barrels a day in January as part of a steady easing of record supply cuts as oil prices rose.

Facebook
Twitter
Pinterest
WhatsApp
Previous articleFacebook cryptocurrency Libra to launch as early as January but scaled back: FT By Reuters
Next articleBrazil’s jobless rate rises to 14.6 percent in quarter through September By Reuters