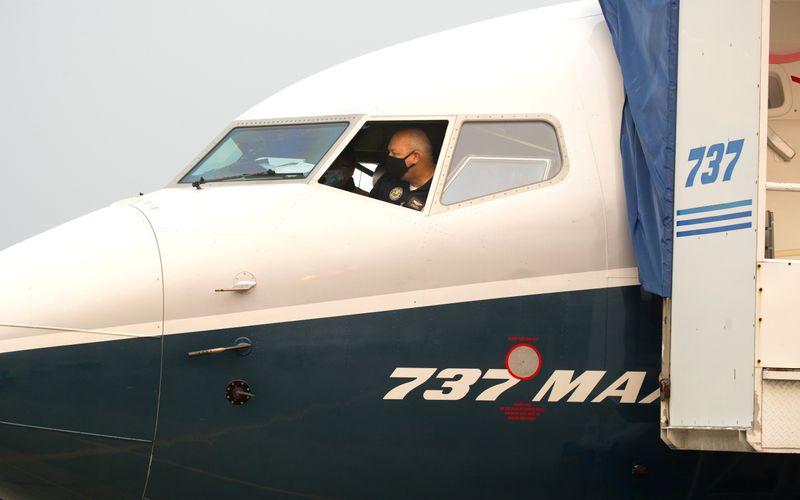 SEATTLE/CHICAGO (Reuters) – Delta Air Lines (N:) is among airlines Boeing Co (N:) has approached to buy dozens of 737 MAX jets built for clients that have since scrapped their orders or gone bust, two people familiar with the matter said.

As the 737 MAX edges closer to commercial flight after an 18-month grounding, Boeing is scrambling to find buyers for the so-called “white tails” – jets painted white, awaiting an airline livery, or whose color schemes need to be swapped.

The 737 MAX’s ban following two fatal crashes had already caused some carriers to walk and the number of unsold jets has soared as the COVID-19 pandemic decimated demand for air travel and new aircraft.

Boeing has had discussions with Delta to take 40 of the 737 MAX “white tails,” the people said.

Of the top four U.S. airlines, Delta is the only one without the MAX. An order from the Atlanta-based carrier, whose relations with Boeing have been frayed in recent years, would be a surprise, market sources said.

Its $14.2 billion in commitments as of June 30 are primarily for Airbus (PA:) jets. Battling the pandemic, Delta has parked jets and Chief Executive Ed Bastian said in July he was seeking to minimize deliveries over the next two years and did not intend to spend cash on aircraft “for some period of time.”

Boeing’s unsolicited offer illustrates one of the key challenges it faces once a modified MAX with safety upgrades receives approval to fly again.

These include restoring confidence in the plane, clearing a backlog of undelivered jets at a time when the industry is shrinking, and boosting production rates.

Boeing has built some 460 737 MAXs whose delivery has been frozen since the March 2019 grounding. Jefferies (NYSE:) analysts estimate that ties up $16 billion in inventory.

Customers have scrubbed more than 400 737 MAX orders this year after delays exceeded a year, triggering a walkaway clause, and analysts say dozens of these come from the stockpile of aircraft already built and waiting to be delivered.