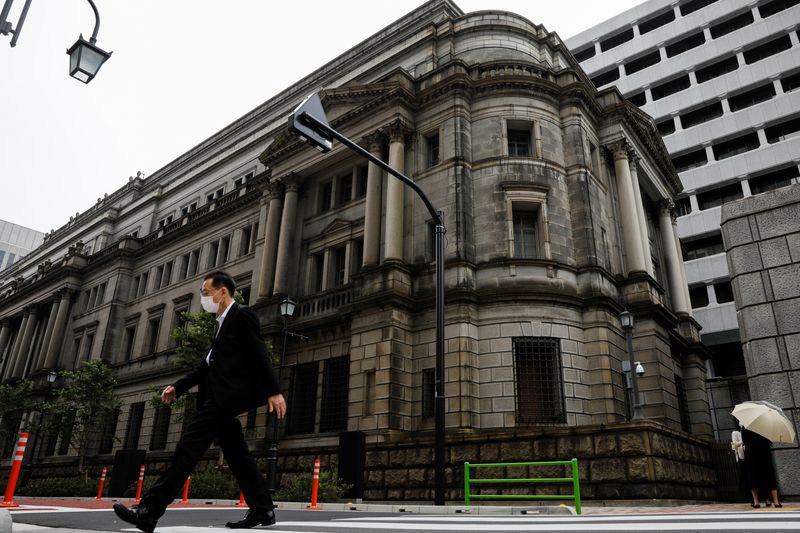 © Reuters. A man wearing a protective mask walks past the headquarters of Bank of Japan amid the coronavirus disease (COVID-19) outbreak in Tokyo

By Leika Kihara and Daniel Leussink

TOKYO (Reuters) – The Bank of Japan on Thursday trimmed its economic and price forecasts for the current fiscal year but offered a more upbeat view on the recovery outlook, signalling that it has delivered enough stimulus for the time being.

The central bank, however, warned the outlook was highly uncertain as the pandemic weighs on service-sector spending and a resurgence of infections in Europe dampen prospects for a sustained global recovery.

As widely expected, the central bank kept monetary policy steady, including a -0.1% target for short-term interest rates and a pledge to guide long-term rates around 0%.

The BOJ also made no changes to a package of steps aimed at easing corporate funding strains, which has become its primary tool to deal with the pandemic-stricken economy.

BOJ Governor Haruhiko Kuroda will hold a news conference at 3:30 p.m. (0630GMT) to explain the decision.

In a quarterly report on the outlook, the BOJ trimmed its growth forecast for the current fiscal year ending March 2021 to a 5.5% contraction from a 4.7% slump projected in July, reflecting sluggish service spending during the summer.

It also downgraded this fiscal year’s core consumer price forecast to a 0.6% fall from a 0.5% drop seen in July.

However, the BOJ revised up its forecast for the next fiscal year beginning in April 2021 to a 3.6% increase, against a 3.3% expansion seen in July.

It also upgraded its assessment on exports and output to say they were “increasing.” That compared with the view in July, when it said they were falling sharply.

“Japan’s economy will likely improve as a trend as the impact of the coronavirus pandemic gradually subsides, though the pace of recovery will be moderate,” the report said.

“Risks to the economic and price outlook are skewed to the downside,” it said, adding the BOJ’s projections are based on the assumption that Japan can avert another lock-down triggered by a huge second wave of infections.

Japan’s economy is bottoming out after suffering its worst postwar slump in April-June, thanks in part to a rebound in exports and output. But weak consumption and capital spending is likely to keep any economic recovery modest, analysts say.

While Kuroda has repeatedly vowed to ramp up stimulus if needed, a dearth of policy ammunition may mean there is not much the BOJ can do beyond rolling over its crisis-response programme or hope the government will deliver another spending package.

Prime Minister Yoshihide Suga said on Thursday he would consider taking “budgetary steps” to support an economy hit by the pandemic, suggesting the chance of a third extra budget to fund new stimulus.

“If the government decides to roll out another package of steps to respond to the health crisis, the BOJ may respond by taking steps to aid corporate financing,” said Izuru Kato, chief economist at Totan Research.