Betting against long-term bonds has been a losing strategy for several decades and this form of contrarian pain has been especially deep in the past two years. It’s debatable if it’s different this time, but bond bears have a new reason to hope as rising yields weigh on long Treasury prices, which have fallen below a key technical support level.

Over the past week, long maturities for US government bonds led a broad decline in fixed income, based on a set of ETF proxies through Oct. 21. The iShares 20+ Year Treasury Bond (NASDAQ:) has tumbled for five straight days, leaving the ETF below its 200-day moving average for the first time in nearly two years.

Bond funds generally have followed suit in recent days, albeit in varying degrees. The shorter-maturity footprint via iShares 7-10 Year Treasury Bond (NYSE:), for example, slipped to a four-month low yesterday, although it remains moderately above its 200-day average.

For the year-to-date window, longer is still better for trailing returns so far in 2020. But a new round of bearish questions are weighing on the bond market’s outlook. 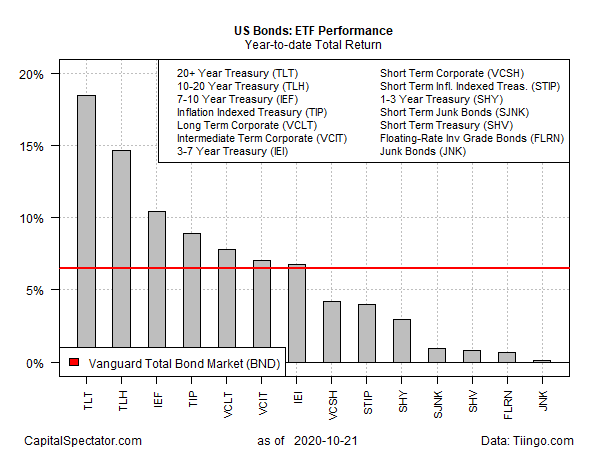 Notably, the benchmark yield is reflecting an upside bias when compared with several moving averages. For example, for the first time this year the 10-year rate’s 50-day average has ticked above the 100-day average in recent days, based on daily data published by Treasury.gov. 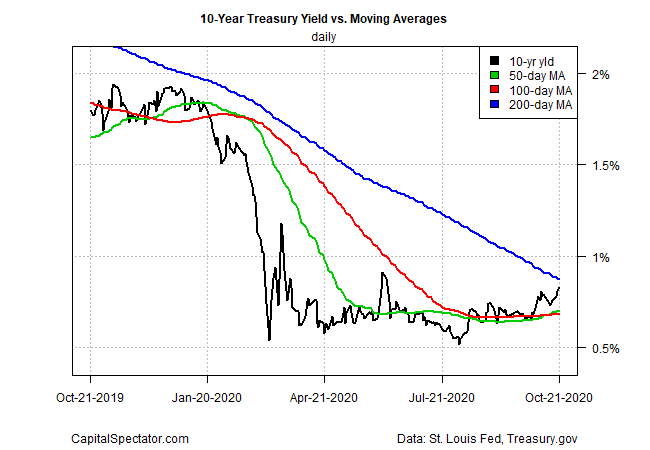 Although it’s widely expected that the Federal Reserve will leave its target interest rate unchanged and near zero over the next 12 months, based on Fed funds futures, longer-dated Treasuries are beginning to flirt with an alternative outlook for yields.

“Broadly speaking the rise in yields this week can be attributed to optimism on the stimulus package,” says Subadra Rajappa, head of US rates strategy at Societe Generale.

“As time goes by it feels more and more likely it’s going to be a bigger package given that the Dems seem to be driving the discussion.”

The assumption is that as the federal government spends more to support the economy as it struggles with the coronavirus crisis, inflation pressures will accelerate. In addition, the Federal Reserve has announced that monetary policy will become more dovish via the rollout of “average inflation targeting” rules recently. The bearish sentiment for bonds is further strengthened by forecasts that Joe Biden is favored via polls to win the election. Democrats, the thinking goes, are more likely to favor fiscal spending/stimulus relative to President Trump and the Republicans.

Adding to investor wariness for bonds: forecasts that fixed-income’s historical role as a diversification tool is fading because yields are at or near record lows.

“US Treasury bonds are not likely to repeat their spectacular performance as income-producing risk reducers in portfolios of the past four decades,” predicts Van Luu of Russell Investments. He adds:

“While bonds still have an important role to play in some settings (e.g., liability hedging for retirement plans), we believe investors should look at alternatives for diversification, including inflation-protected securities, gold, defensive currencies and stocks and option protection.”

Despite a cautious outlook, Luu adds that “we believe that no other asset class alone can fulfil all the functions that bonds played. We think it’s prudent for investors to consider a balanced combination of the bond alternatives we identify here.”

Despite these views, predicting policy changes in Washington is especially challenging at the moment while market forecasts are as uncertain as ever. A key question is whether additional stimulus will offset the disinflationary pressure that flows from economic headwinds born of the coronavirus crisis?

Unclear, in part because the future path of the virus and the timing of a vaccine rollout are unknown. Nonetheless, some analysts eye the possibility that regime shift is stalking the bond market, albeit after many failed predictions of the same over the years.

Despite the risk of trying to anticipate the future path of Treasury yields, Jim Caron, head of global macro strategies at Morgan Stanley Investment Management, thinks it’s finally different this time. He says:

“This is an inflection point in the sense that stimulus is coming,” he says. “It’s not if, it’s when, and we’re getting closer to the point of I think no matter who wins the presidency you’re going to get fiscal stimulus. It’s just a matter of how much and what the process is.”

For now, the bond market seems inclined to agree and is repricing fixed-income securities accordingly. Only time will tell if this another edition of noise or the end of the road for the 40-year bull market in bonds.