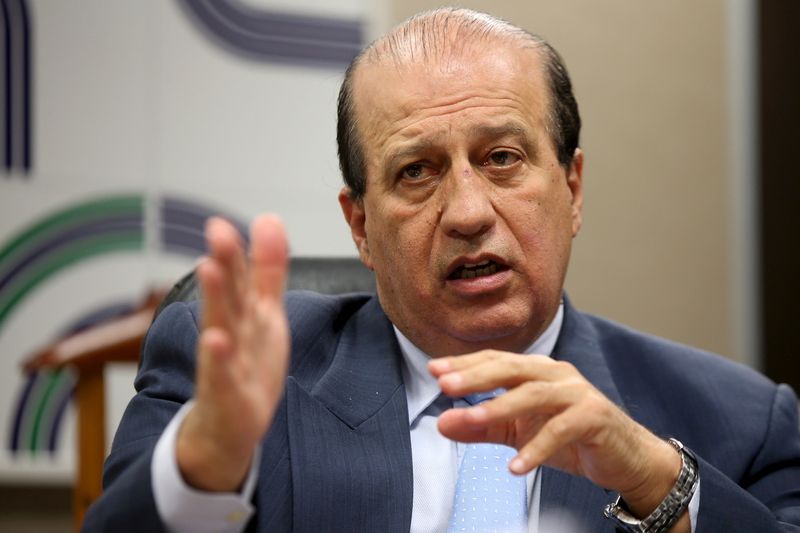 © Reuters. FILE PHOTO: Judge Augusto Nardes of the Federal Accounts Court, or TCU, speaks during an interview with Reuters in Brasilia, Brazil, in this June 30, 2015, photo. REUTERS/Adriano Machado/File Photo

BRASILIA (Reuters) – Brazil’s government should be allowed to set aside a constitutional spending ceiling temporarily so it can spend its way out of the economic crisis brought on by the coronavirus pandemic, a judge on the federal audit court (TCU) told Reuters.

Augusto Nardes, whose review of spending under former President Dilma Rousseff found she broke a fiscal responsibility law, leading to her impeachment in 2016, said the current crisis is so bad that Congress should change a government spending cap.

“Brazil is living through a social war caused by the pandemic, and Congress should reach a national pact lasting a minimum of three years to restore economic growth,” Nardes said in an interview late on Thursday.

His comments add to a growing chorus in Brasilia calling for fewer restrictions on government spending, even among those who once held the line on fiscal discipline. The shift has rattled markets nL1N2RH29S, led Treasury officials to quit https://www.reuters.com/world/americas/brazil-stocks-currency-plunge-rate-futures-rise-fiscal-fears-2021-10-21 and forced the central bank to step up https://www.reuters.com/article/brazil-economy-rates/update-2-brazil-fiscal-fears-spur-more-aggressive-150-bps-interest-rate-hike-idUSL1N2RN3A9 the world’s most aggressive tightening cycle.

Rousseff’s successor amended the constitution to cap annual spending growth at the rate of inflation. However, after the Brazilian economy shrank 4.1% last year, President Jair Bolsonaro’s government is scrambling to find a way to fund more cash payments to 17 million families hit by the pandemic.

Economy Minister Paulo Guedes suggested https://www.reuters.com/world/americas/bolsonaro-says-new-welfare-program-respect-brazil-spending-cap-2021-10-20 a loosening of the spending ceiling, and allies in Congress have proposed legislation to allow nearly 100 billion reais ($17.7 billion) of additional spending next year.

“The spending ceiling law cannot be maintained in this social war, but it is up to Congress to decide,” Nardes said.

“The Japanese, the Americans, the English are already increasing their debts to get out of the crisis,” he added.

While the U.S. government is investing $3 trillion, Brazil is investing just 60 billion reais in infrastructure, Nardes noted. Japan is spending more, even with a public debt at 200% of GDP, whereas Brazil’s debt is less than 100% of GDP, he said.

Nardes said on Thursday he had proposed a national pact on the issue to lower House Speaker Arthur Lira and the head of the Senate, Rodrigo Pacheco.

On another of Bolsonaro’s recent proposals, to privatize state-controlled oil company Petrobras, Nardes said he agreed in theory.

The court would evaluate any move to sell the government’s stake in Petrobras as it does for all public concessions in Brazil, he said, adding there was a clear need to reduce the size of the oil-producing giant.

“There is no way we can maintain this gigantic structure, because using oil could end in 10, 20 or 30 years. Brazil needs to develop sustainable alternatives,” he said.