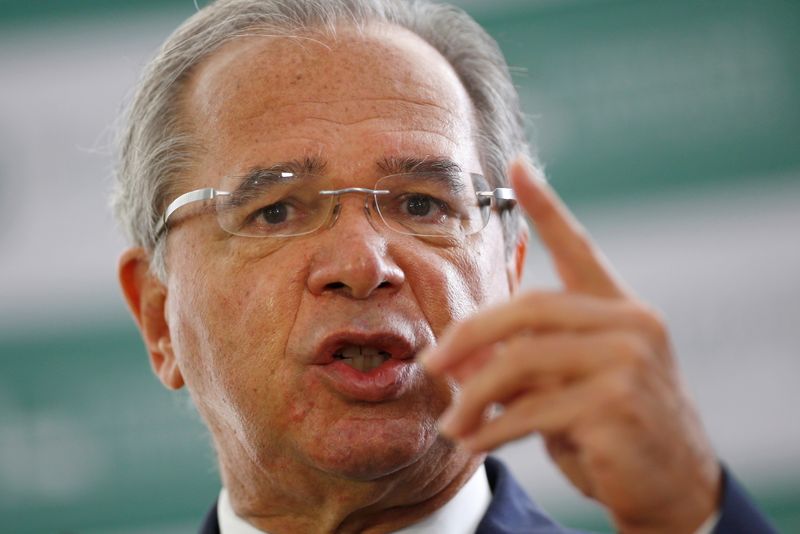 By Marcela Ayres and Jamie McGeever

BRASILIA (Reuters) – Brazil’s Economy Minister Paulo Guedes said on Tuesday that the full payment of 90 billion reais ($17 billion) of federal court orders potentially slated for 2022 would hit the government budget like a “meteor”.

In a live event hosted by online media outlet Poder 360, Guedes said the government has already drawn up a draft constitutional amendment to address these potential liabilities, noting that the federal government’s discretionary budget is 96 billion reais.

These payments are court-ordered outlays, often comprising compensation, benefits and tax refunds that the government must make following legal defeats in court.

That has suddenly soared to 90 billion reais, Guedes said, adding that he was not sure how that happened.

“Maybe we fell asleep at the wheel,” Guedes said, adding that the government may have “failed” somewhere along the line. But he denied the situation could have been too different because these issues are largely “out of our reach.”

This renewed focus on Brazil’s fiscal challenges weighed heavily on the currency on Tuesday, with the U.S. dollar rising 2% to 5.27 reais.

Guedes also said on Tuesday that the beefed-up nationwide Bolsa Familia welfare program slated to be rolled out after November has been budgeted for and will not threaten the government’s ‘spending cap’ fiscal rule.

But the potential 90 billion reais of court-ordered payments, if enforced, would affect all government spending, he warned.