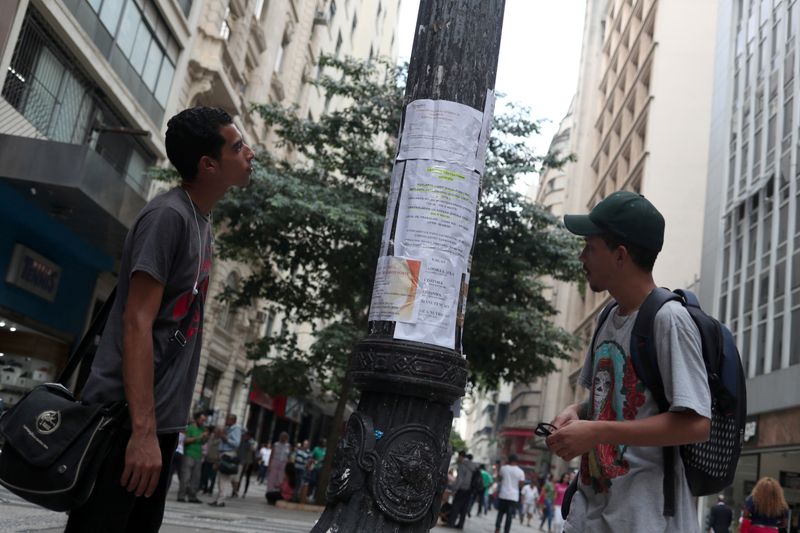 BRASILIA (Reuters) – Formal job creation in Brazil surged to a record high in October, figures showed on Thursday, as the dominant services sector roared back to life to account for around 40% of new jobs.

A net 394,989 formal jobs were created in October, the economy ministry said, marking the fourth month in a row of gains and significantly more than the 233,500 forecast in a Reuters poll of economists.

The economy ministry chart below shows the scale of job growth in October compared with the same month in previous years.

That reduced the net number of formal job losses in the first 10 months of this year to 171,139, the ministry said, also significantly less than 2015 and 2016 when Brazil was last in recession.

Hailing the record figures, Economy Minister Paulo Guedes said that Brazil could end this year not having lost any formal jobs at all as the economic rebound in the second half of the year claws back most of the jobs lost in the first half.

“In this recession … we didn’t lose focus, we got back up, and we are creating jobs at a rapid pace. We can get to the end of the year with zero formal jobs lost. Zero,” Guedes said, adding that this woulds represent a “historic year for the Brazilian economy.”

The figures also showed that the formal labor market in October consisted of 38.6 million workers, the highest since March this year as discouraged workers returned to look for work.

Official labor market data for the three months to September will be released next week. The unemployment rate is expected to rise to a new series high of 14.9% from 14.4%.