Brazil raises key interest rate by the most since 2003

Sign up to myFT Daily Digest to be the first to know about Banco Central do Brasil news.

Latin America’s most populous nation is witnessing a sharp acceleration in prices as its economy recovers from the Covid-19 pandemic, pinching households and putting pressure on the Banco Central do Brasil, or BCB, to act.

A weak exchange rate, buoyant worldwide demand for raw materials and rising electricity bills because of the worst drought in almost a century have all contributed. Inflation in Brazil exceeded 8 per cent in the 12 months to June, more than double the official target of 3.75 per cent for 2021.

Wednesday’s decision was in line with forecasts from economists polled by Reuters, who had expected the Selic — the BCB’s key interest rate — to be lifted from 4.25 per cent to 5.25 per cent.

It was the central bank’s fourth consecutive increase to the benchmark, which was at a historic low of 2 per cent until March.

The central bank has a difficult job ahead of it, which is to reduce the inflation rate by more than 50%

The full percentage point jump is a step up from the three previous 75bp rises announced this year by the rate-setting committee, known as Copom. It was also the sharpest since its last 100bp rise in 2003.

The BCB said it expected another 100bp increase at its next meeting. Among other factors, it cited “the evolution of the Covid-19 Delta variant” as adding “risk to the recovery of the world economy”.

As a commodities boom and pandemic-related bottlenecks in global supply chains feed an international debate about whether a return of inflation will be temporary or long-lived, central bankers in some countries are tightening monetary policy.

Russia, Mexico and Chile have all recently raised interest rates, while the US Federal Reserve is edging closer to a decision on slowing its massive monetary stimulus.

The BCB, which gained formal autonomy this year, is at the forefront of emerging markets pursuing an aggressive approach, said William Jackson, chief EM economist at Capital Economics.

However, he noted Brazil’s gross domestic product was still below the level of 2014, before a deep recession struck.

“That would suggest the economy is operating below its potential and that monetary policy should be stimulative,” Jackson said. “But with the inflation threat as it is, there’s a belief that can’t continue for the time being.”

In a country that experienced runaway prices and hyperinflation only a generation ago, monetary policymakers will have to strike a balance between shielding consumers and encouraging growth. 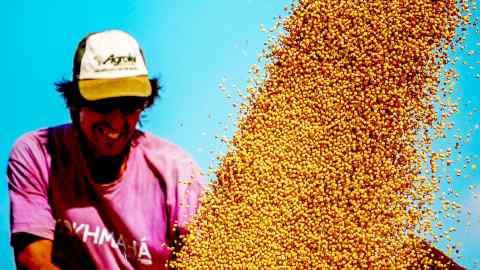 “In 2022, the centre of the inflation target is 3.25 per cent, but inflation in the previous year should be close to 7.5 per cent. In other words, the central bank has a difficult job ahead of it, which is to reduce the inflation rate by more than 50 per cent.”

Higher food costs have pushed millions of people into hunger in Brazil, with unemployment near a record level since a data series first began in 2012. Transport and housing have also become more expensive lately.