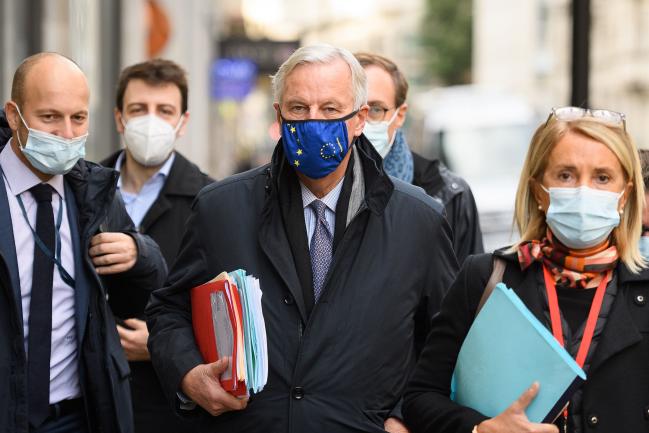 (Bloomberg) — Brexit negotiators will begin a brief break on Wednesday, with time running out for both sides to reach a breakthrough over their biggest disagreements.

The U.K. and EU teams, which have been working round the clock in Brussels since last week, each plan to hold internal discussions before formal talks resume in London on Sunday.

The EU’s chief negotiator, Michel Barnier, will brief ambassadors from the bloc’s 27 countries, most likely on Wednesday, while his opposite number, David Frost, is set to update Prime Minister Boris Johnson.

Johnson is now unlikely to speak with European Commission President Ursula von der Leyen this week, as had once been considered, but may do so at the end of next week if a final political push is needed to seal a deal, two people familiar with the discussions said.

Officials on both sides say an accord is in sight, and could be reached between Nov. 13 and Nov. 16 — but they caution that the negotiations could still break down. While the two sides have made progress in recent days toward narrowing their differences over fishing, the level competitive playing field and how any deal will be enforced, they haven’t yet reached an accord.

Without one, millions of businesses and consumers will face the disruption and additional costs of tariffs and quotas when Britain leaves the EU’s single market on Dec. 31. Because any deal requires the approval of both the U.K. and European parliaments, it needs to be struck by mid-November if it is to be ready in time.

“There’s obviously a lot of work still to be done,” European Commission spokesman Daniel Ferrie told reporters in Brussels. “Negotiations are ongoing on all fronts.”

Both sides have made concessions on the level playing field and have reached agreement on some areas, including the parameters of the U.K.’s future state aid policy, officials said. The biggest remaining conflict is over the EU’s push to include so-called ratchet clauses in any accord, something that would bind the U.K. to the EU’s standards as they evolve.

On fishing, the two sides are closer to a tentative compromise that would allow the U.K. to claim it has regained control of British waters — but decisions about future quotas could be left to a later date. Officials stressed, however, it shouldn’t be called a breakthrough yet. France and other coastal states such as Belgium are pushing strongly for continued access to waters between six and 12 miles off Britain’s coast, something they enjoyed under an agreement that pre-dated Brexit.

Separately, the European Commission held off launching legal action immediately against the U.K. over Johnson’s plan to rewrite parts of the Brexit divorce deal, saying it is still considering its next move.

The bloc had given the U.K. until Oct. 31 to respond to its demand to withdraw parts of the Internal Market Bill that breach the Withdrawal Agreement Johnson struck with the EU last year. A Downing Street spokesman said on Tuesday the U.K. hadn’t replied to the request.

The legislation had threatened to sour relations between the U.K. and EU and put a trade deal between the two sides in jeopardy. But with talks over an accord progressing, people close to both sides of the negotiations have played down the threat. Each party sees the importance of securing a trade deal and, while the EU takes a breach seriously, officials in Brussels have welcomed the British government’s attempt to defuse the situation.

“We are committed to working through the joint committee process to find a satisfactory outcome for both sides,” Johnson’s spokesman, James Slack, told reporters on Tuesday. “That is our overriding priority.”