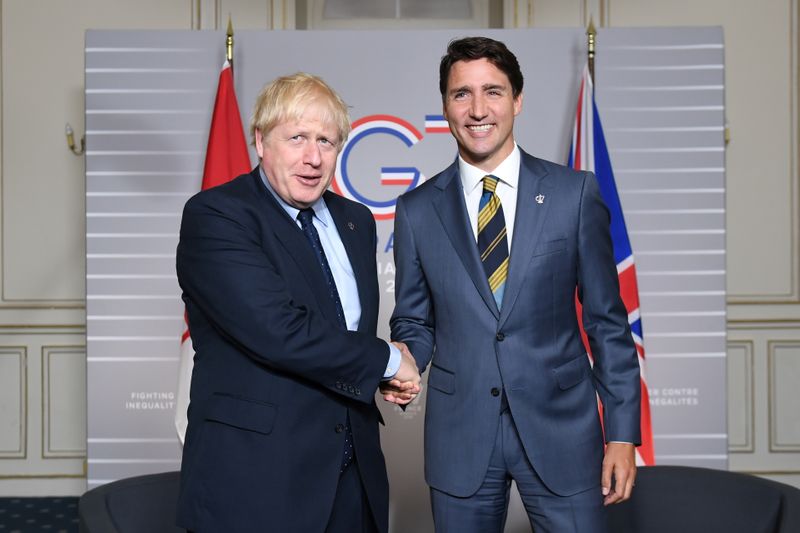 By Kate Holton and Amran Abocar

LONDON/TORONTO (Reuters) – Britain and Canada struck a rollover trade deal on Saturday to protect the flow of $27 billion-worth of goods and services between them after Brexit, and vowed to start talks on a bespoke agreement next year.

As Britain prepares to end its transition out of the European Union on Dec. 31, it has negotiated multiple rollover bilateral deals to maintain trade, with many simply replacing the terms the bloc had already agreed.

British Prime Minister Boris Johnson joined Canada’s Justin Trudeau and their respective trade ministers on an online call to mark the deal, which paves the way for a tailor-made agreement covering more areas such as digital trade, small businesses, the environment and women’s economic empowerment.

“Today’s agreement underpins 20 billion pounds worth of trade and locks in certainty for thousands of jobs,” Liz Truss, the UK’s international trade secretary, said in a statement.

Her Canadian counterpart Mary Ng said the transitional agreement “largely replicates” the EU deal on tariff reductions and provisions for labour and environment.

Johnson is trying to shape a new “global Britain” that can strike out alone and negotiate better trade agreements than the EU as part of what he says is the benefits of its historic decision to leave the world’s biggest trading bloc.

In less than two years it has agreed trade deals with 53 countries, accounting for 164 billion pounds ($217.82 billion) of British bilateral trade. Johnson’s critics point out that many are largely the same as the EU deals.

The UK-Canada Trade Continuity Agreement will be subject to final legal checks before it is formally signed. “This is a good moment,” Trudeau said.