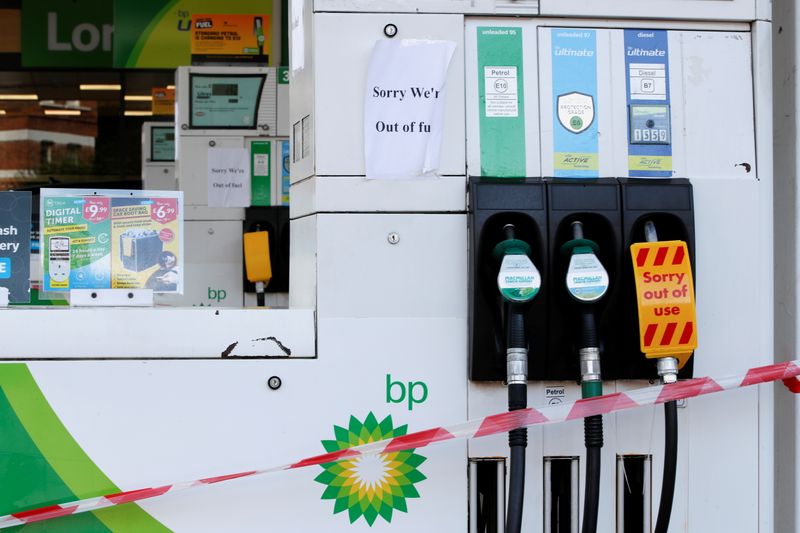 © Reuters. A BP petrol station that has ran out of fuel is seen in London, Britain, September 26, 2021. REUTERS/Paul Childs

LONDON (Reuters) -British drivers expressed frustration on Tuesday as they hunted for hours or sat snarled in queues to fill their tanks after gas stations in major cities ran dry due to a trucker shortage that has prompted the government to put the army on standby.

Queues of drivers snaked back from those petrol stations that were still serving in major cities, though dozens of forecourts were closed with signs saying they had no petrol or diesel, Reuters reporters said.

A post-Brexit shortage of lorry drivers, exacerbated by a halt to truck-driving-licence testing during COVID lockdowns, has sown chaos through supply chains, raising the spectre of shortages and price rises in the run up to Christmas.

Business Secretary Kwasi Kwarteng said a limited number of military tanker drivers had been put on a state of readiness to be deployed to deliver fuel if necessary.

“I can’t believe it – it’s crazy,” said David Scade, a 33-year-old delivery driver who drove for hours searching for fuel in London.

“They keep saying there is no shortage but I suppose everyone is panicking now,” said Scade who was filling up at a Shell (LON:) gas station in London.

Fights broke out at some English petrol stations as drivers jostled for fuel. Medics said health workers should be given priority to fill their cars to keep the health service working.

An air of chaos has gripped the world’s fifth largest economy in recent weeks as the shortage of truckers strained supply chains and a spike in European wholesale prices tipped energy companies into bankruptcy.

Retailers, truckers and logistics companies have warned that prices for everything from energy to Christmas gifts will have to rise.

British ministers, fuel companies and petrol stations say there are sufficient supplies of fuel but that the lack of truckers combined with panic buying has drained the system.

Such is the gravity of the situation that the British Medical Association has called for health workers to get priority access to fuel to ensure the health service can operate.

The demand for fuel has meant that 50% to 90% of pumps were dry in some areas of Britain, according the Petrol Retailers Association (PRA), which represents independent fuel retailers who account for 65% of all the 8,380 UK forecourts.

The government on Sunday announced a plan to issue temporary visas for 5,000 foreign truck drivers. But some Polish hauliers said that offer was laughable and that few would be likely to take it up.

Hauliers, petrol stations and retailers say there are no quick fixes as the shortfall of truck drivers – estimated at about 100,000 – was so acute, and because transporting fuel demands additional training and licensing.

The British Retail Consortium (BRC) urged the government to broaden the size and scope of the scheme to attract the truckers needed to keep Christmas supplies on track.

“To avoid disappointment for millions of households during the festive season we urge the government to rapidly extend this programme, both in size and scope, to HGV drivers in all sectors of the retail industry,” Andrew Opie, director of food and sustainability at the BRC, said.

“It will take many months before there are enough new British drivers to cover the shortfall,” Opie said.